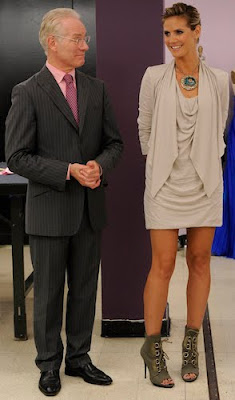 Last night's episode may have marked the return of the judges' collective sanity. And just in time too since we only have a few episodes left.

The designers were challenged to create a look for Heidi's new clothing line for New Balance. Most of them seemed pretty underwhelmed by the active-wear line, but only Gretchen had the audacity to curl up her nose at it. The winning look would be added to her collection.

After the designer took one trip to mood and had an early consultation with Heidi (that didn't go well for most), Tim announced they would be creating a three look collection in two day, but they'd have some help. Help or not, that is craziness. The help turned out to be eliminated designers who, led by Ivy, created more drama than I think their help was worth. Ivy accused Michael C. of cheating and got everyone to repeat the Michael C. bashing I had hoped was behind us. After stern words from Tim, the drama either stopped or the editors spared us any more of it (presumably because Ivy was giving them a headache).

April found herself in the top three again this week. I worried about her doing active wear because it doesn't seem like her thing, but she still got some of her style in there. She also tried some shapes and styles we haven't seen from her on the runway yet. The judges mostly liked her pieces although they though it was lacking in a few area. Heidi was afraid of the little black shorts wondering if any woman would be brave enough to wear them in public. (If Heidi doesn't think she can pull of tiny shorts, than the rest of world should probably give up on them too.) 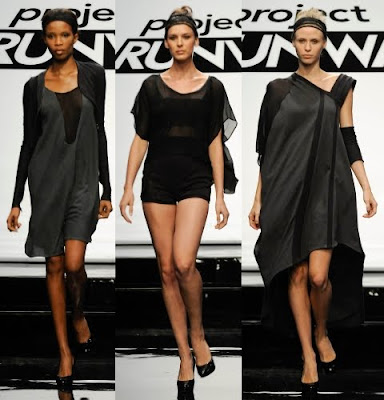 Mondo had a rough start. During his early critique with Heidi, he reacted very poorly to her negative take on his clothing. We learned early in season that Mondo doesn't have the best people skill, and Heidi did step out of her normal role. In the end he channeled that frustration to make a mini collection the judges loved. Michael Kors loved the quirky trianle, circle and square headbands Mondo had intended only for the runway, which makes me think Mondo has even more fabulous ideas he hasn't found the confidence to unveil yet. They loved everything about his collection from its wear-ability to its hanger appeal. 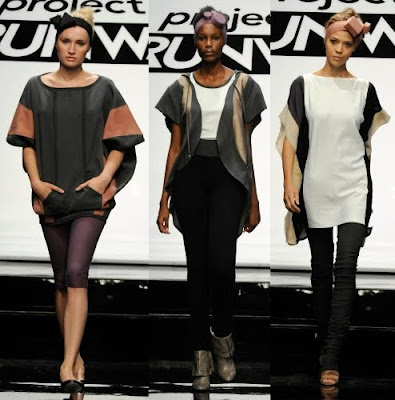 Andy put an end to the Mondo winning streak though with a mini collection that announced he had indeed not lost his ability to make clothes after whatever happened to him last week. They loved the classic feel. Michael Kors called them exciting and wearable. Heidi loved them so much that she added not one but all of his looks to her collection. This was a well deserved win from Andy, and from the looks of Heidi's collection, the most exciting three looks she'll sell. 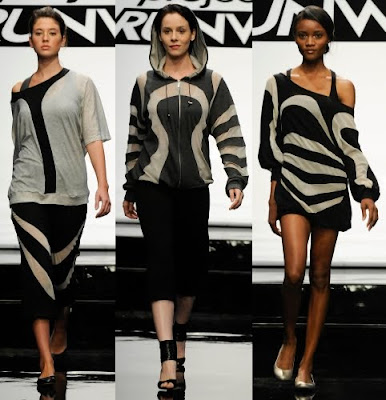 Gretchen was in the bottom three, which is proof the judges are regaining their sanity. Heidi called her collection a "hosh kiposh," which Michael translated to "hodge podge." She hated the weird, sheer biker shorts that peeked out under the skirt. Michael said they looked like some sort of transparent spanks. The gray coat was called a bathrobe, and the who thing was said to look uncomfortable and difficult. Gretchen presented it as her genius fix for Heidi's humdrum collection, but I agree with the judges (whoa!) that her arrogant, misstyled, sloppy collection wouldn't fix anything. Gretchen is safe for another week though. 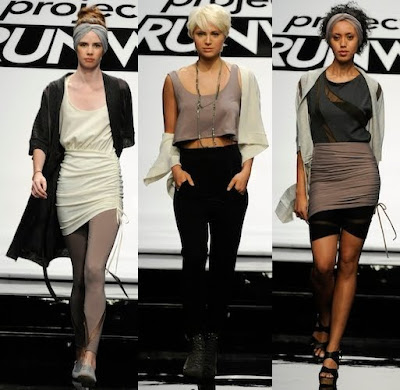 Michael Costello found himself in the bottom two this week. His collection really was sad, but I can't blame him since the other designers made sure he was really sad while he was designing it. All the judges hated the colors, which did not go with Heidi's collection on the least. Nina didn't like the styling and accessories. Overall, this was a miss for Michael C. Although, he did earn a small victory during his consult with Heidi when she remarked that his sewing skill were quite impressive for someone who supposedly "couldn't sew." 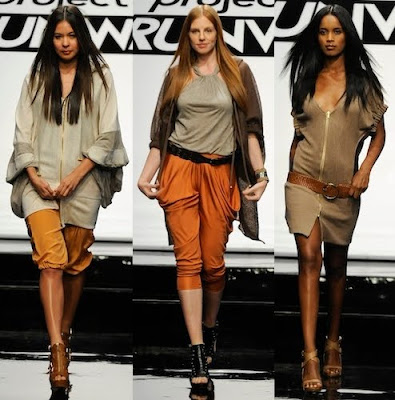 Christopher ended his run with a boring, unmemorable collection. Michael Kors said he didn't see a garment anyone would pay more than $10 for. (I wouldn't pay that much). He called Christopher's dress a sad face. Heidi didn't like the butterfly top, which was OK in my opinion, but it had proportion problems and didn't fit with anything. Christopher is one of those designer I will forget was ever on Project Runway. He seems like a nice guy. He can sew quite well. I just have no idea who he his, what his style is or why I should care about anything he makes. Sorry Chris. 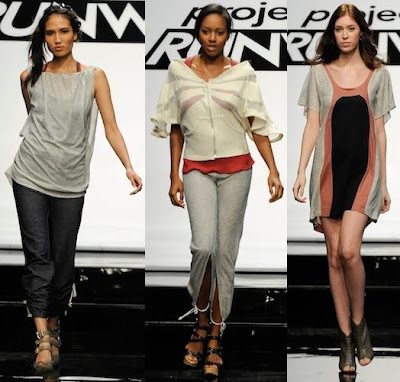 What did you think of last night's challenge? I thought it was one of the more difficult challenges because it was so narrow. This top three designers really set themselves apart with the challenge and I hope they are the three we see at fashion week. I think Michael Costello is the next to go, but you never know now that the judges seem so disillusioned with Gretchen--finally. I hope our designers are allowed to create fabulous things for the next challenge because week offered little to swoon over (ditto for this whole season). Who are your top three? Who will go home next?
Project Runway