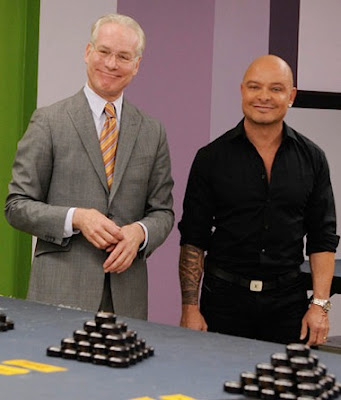 Last night the designers were challenged to create a high fashion "couture" look using one of the color themes of L'Oreal's HIP Studio Secrets eyeshadow duos (which I've been wanting to try). They chose from five categories--crystal, bright, matte, metallic and velvet. Of all the strange challenge tie-ins with sponsors, this one wasn't too bad since it was still quite broad, and we got to see fun makeup.

The stakes were the highest they've ever been on Project Runway. The winner would not only get his or her look featured in a L'Oreal advertorial published in Marie Claire, but he or she would also win $20,000 from L'Oreal Paris. Wow! This launched most of the designers into describing their school debt and dwindling bank accounts plus what they would do with the money. April wanted a miniature pony. Gretchen simply wanted the credit card companies to stop calling. Mondo wanted drinking money. With the way the judges are acting this season, I think I'm with Mondo.

Of course, this is Project Runway so nothing it's that simple. On the second day of the two day challenge, Tim comes in to inform the designers they are making a ready to wear version of their "couture" look. At least they didn't have to make a cheap version of another designer's look like last year. That was confusing.

Christopher chose crystal as his theme and ended up safe. I just don't know what to do with Christopher. I see some ethereal qualities in his couture dress (left), but I don't see it quite working. The ready to wear look is nice and goes with the gown, but it's not great. Also, for a makeup related challenge, his models' faces are far too nude (and the hair is blah). Christopher has made it quite far, but I just can't see him as a serious contender for fashion week. His clothes do not inspire me at all. 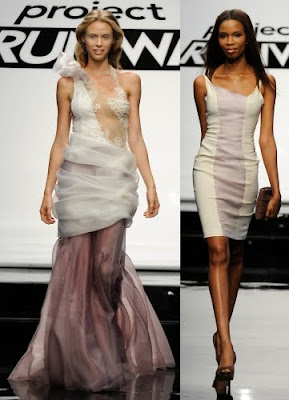 April, who chose matte yet used sparkle, was safe, but not with her design. She really designed something true to her point of view. I wish the photo was clearer and the runway show longer because I'd really like to look at it more closely. I appreciate someone doing something interesting. Also, these two looks clearly belong to the same "collection" as the judges liked to say last night. April seems to be getting stronger. 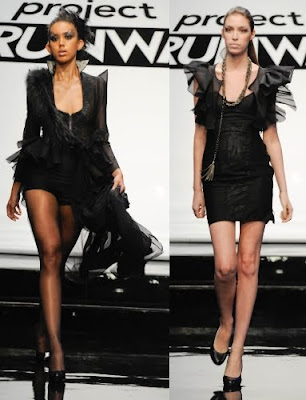 Michael C found himself in the bottom three for the first time. For a guy the other designers say is terrible, it's amazing he's stayed out of the bottom this long. He chose metallic as his theme. The dresses had nice shimmer to them, but the proportions were way off, especially on the ready to wear look (right). The ball gown had way too much train. Michael Kors commented that this dress looked like it was made from every curtain in Tara, trumping Scarlett O'Hara in Gone with the Wind. Still, Michael didn't come close to the atrocities committed by the bottom two so he was safe. 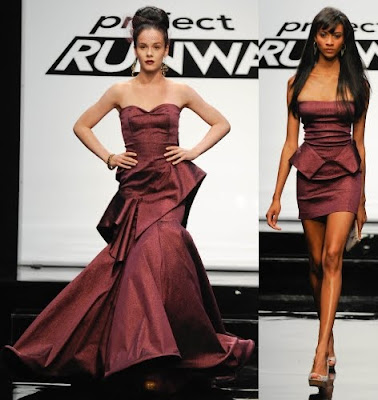 Valerie seemed certain she was going home. She chose crystal as her theme and decided to work with silk. This decision nearly ended her run on the show. The silk did not cooperate and she got defeated. Valerie showed some great talent in the beginning so I'm sad to see her getting so off track every week. Any little thing throws her. I think she has a lot of potential and would even like to see her at fashion week. I hope she recovers from this. Her white dress was blah. On a better dress the shoulder piece might work, but it just looked awkward here. Her black dress was something I would have overlooked at Target. It wasn't horrible, but it was just clothing--not fashion. Both fell short of her My Fair Lady inspiration. 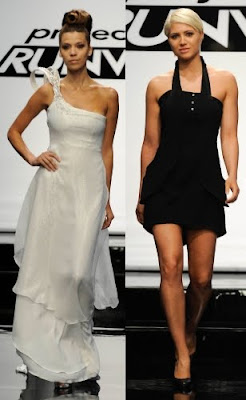 It was Ivy that committed the real fashion sins of the challenge. Usually, Ivy has mediocre "ideas" at best, but saves them with slightly better than average construction. Last night the ideas and the construction suffered. Ivy decided to challenge herself by choosing bright as her theme. Bright makes her think of Hawaii, which makes her think of the ocean. She became too literal with her idea and created an "under sea look" that drowned her. Nina called it Little Mermaid. The judges hated the neckline that appeared on both dresses. The "high fashion" dress fit horribly and did terrible things to the model's body. It was bright, but the colors were not well chosen. Ivy went home. I think it was her time. 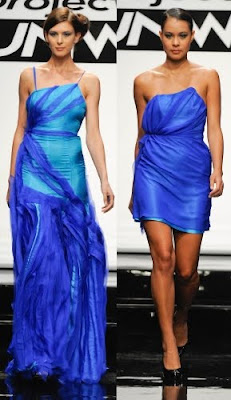 Gretchen landed a top three spot. She was the only designer to brave velvet as her theme. I actually do like both dresses. I'm not crazy about the velvet one because it makes me think of the velvet Christmas dresses I wore when I was in junior high. I like the hippie vibe, but I don't see it as a "couture" or "high fashion" dress unless you attended the Urban Outfitters school of high fashion. The judges cooed over it, and I'm not sure why. Further, they didn't seem as crazy about her ready to wear dress, which I liked more. I would totally wear it. When the model walked, the demure looking dress had high slits on the side, which were hidden by the fabric over top. Nice detail. April should have probably had this slot, but Gretchen seems to be the judges' pet. 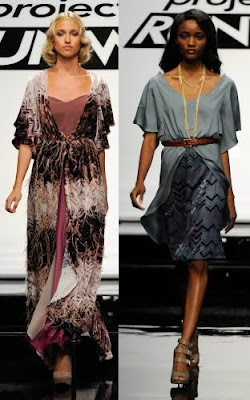 Andy finally created what I've been waiting for all season. This look was over-the-top, dark, interesting and completely worthy of a win (which he did not get). He had metallic as his theme and was inspired by warriors. The pants of this outfit have pumps sewn into them so they're like a boot pant all in one. His techniques were fascinating. In the ready to wear look, he toned down the metallic by putting a sheer material over it making it very edgy, but easy to wear. He also had awesome makeup. I felt Andy and Mondo had an equal chance of winning. Andy's look was my favorite, but Heidi didn't like it so that seemed to make the judges' decision easier. 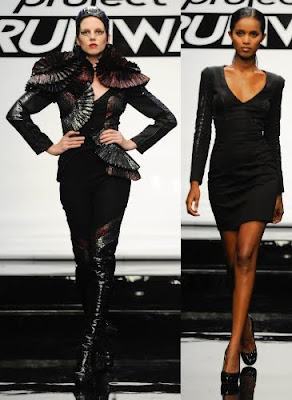 Mondo won the advertorial and $20,000 with his bright themed (of course!) couture gown and simple-chic day dress. Even though Andy was my favorite, I don't begrudge Mondo his win one bit. He had a struggle after the first day and thought it was over for him. He pulled through and created a crazy cool gown and a very chic little dress (which reminds me of Seth Aaron's jacket from last season and now I want both of these things). The best part of Mondo's win was seeing him shoot the advertorial. How adorable was that? 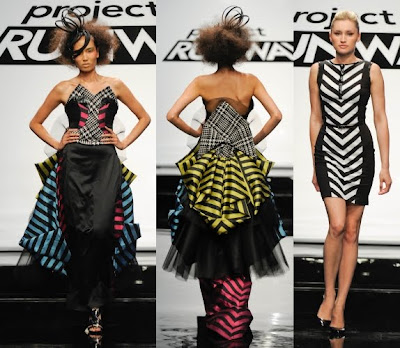 I'm sad that it's been so many weeks since we've had interesting fashion. I hope we can keep up this direction and continue creating something worth looking at. Next week, the designers will be repeating the HP challenge from last year and creating their own textiles. I'm very excited to see how that goes. I have high hopes. Hopefully they won't be dashed.

How did you feel about this challenge? Did you agree with the winners and losers? Are you still feeling like the judges are taking crazy pills? Except guest judge, Naeem Kahn, who was excellent! Who is going to fashion week? I'm hoping to see Mondo and Andy there. Gretchen seems destined since the judges love her. Do you think Valerie and April have a chance? What do you make of Christopher?

Robin said…
I really like April! I'm also still down with Michael C., though I judge him a bit more harshly than the others because I'm trying to figure out why the other designers think he sucks.

I really wish Gretchen would go. She's obnoxious. Her aesthetic isn't my style, though I can't argue that she's one of the better designers.
September 25, 2010 at 6:43 PM

Rachel said…
I think I liked Andy's looks the best this week, but I love Mondo in general so I'm happy with him winning too. I want to see Andy and Mondo at fashion week... and I'm sure Gretchen will be there too (boo).
September 25, 2010 at 9:10 PM

Catie D. said…
Love, love, love, love, LOVE Andy's look!!! I gasped when it came down the runway. The boot pants weren't me, but they were still beautiful. The jacket though...oh, my God, yes please!

On the other hand, I thought Gretchen's look came across as old and ugly. Maybe if she used a different color, maybe if she lowered the neck line to below frumpy Grandma height, and maybe if she omitted the feathers, it's look better. To me, it just looks like the Seventies threw up on the model.

Mondo's look was so Mondo, just not me. I liked it a lot, just not for myself.

I hope Valerie gets voted off next week, then Gretchen. Or vice versa. They make the show nearly unbearable.
September 25, 2010 at 11:30 PM

Kaye said…
I didn't like Gretchen's at all. I was shocked that she was in the top. I thought it looked liked a robe a woman in the 70s would wear outside to feed her chickens in the morning. Her ready-to-wear look was better, though.

I was so glad Mondo won. I really hope we see him at fashion week. Andy's look was great this week too. I think April has a lot of talent and I hope we get to see more focus on her.
September 26, 2010 at 12:26 PM