Review: On The Road with Austin & Santino 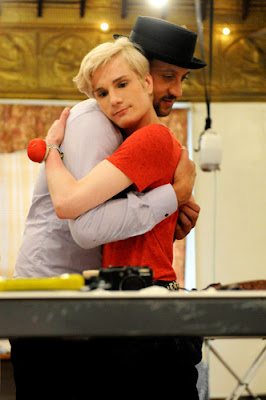 After the Project Runway Season 8 premiere, Lifetime debuted a new fashion series feature two Project Runway alums, On The Road with Austin & Santino. Lifetime did a terrible job promoting the show because I had no idea what it would be about other than involving fashion somehow. This may have been a good move on Lifetime's part because I went into the show with no expectations and came away rather pleased.

The Premise: Austin Scarlett (Season 1) and Santino Rice (Season 2) team up to travel around the country making special outfits for interesting, non-celebrity people.

The Cast:
Austin Scarlett won the first ever Project Runway challenge on the first season of the show. I actually missed that season, but I've seen a few clips that have made me interested in Austin. He creates rather fabulous items, and has a great personality for TV.
Santino Rice is everyone's favorite villain. Most people loved to hate him on the show. He got on my nerves after a while, but I still always kind of loved watching him. He's loud and opinionated, but he has a great instinct for design.

I wasn't sure how these two would mix, but they worked well. They quarreled a bit and had very different ideas on design, but they balenced each other nicely.

The First Episode: Austin and Santino headed to Texas to make a special dress for a teen trick horse rider, Sadie, who did amazing gymnastic-type moves while riding a horse. She had a big party coming up and wanted something different her jeans, t-shirts, cut-offs and tank tops. They were faced with the challenge of designing a cute, but not costume-y dress for a casual girl. 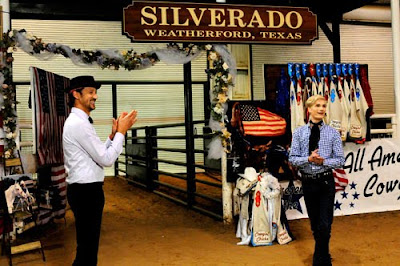 Austin and Santino had to use materials available locally, which were either quite limited or they chose small local shops for more of a challenge. Unlike most makeover shows, Austin and Santino never mocked Sadie or told her she should be dressing a certain way. In fact, they never commented on her typical wardrobe except to better understand what would make her comfortable or uncomfortable. Their mission was to give a special gift to a unique girl rather than try to force that unique girl past her "comfort zone" into more "fashionable" territory. That's not to say the dress they made her wasn't adorable and quite fashionable.

Both Austin and Santino seemed in awe of Sadie. They admired the work she put into what they called "her art." They really tried to understand her and make a dress she would feel wonderful in. Santino even took her shoe shopping for fun cowboy boots after she said wearing heels was the hardest thing she'd ever done (harder than flipping on a moving horse--wow!). I loved that they didn't push her into heels. Austin even did her hair and makeup for her big day. She clearly felt like a princess.

The Verdict: I'm excited to tune in next week. I love the idea of a fashion "gift" show rather than a fashion rescue mission. Santino and Austin were fun to watch. They quarreled a bit (it was entertaining), but had great fun the rest of the time. What did you think of the show? Did you watch it (if, not watch the full episode here)? Are you going to keep watching?
Project Runway TV + Film

a thousand mason jars said…
wow, i had never heard about the show before your post!

Sarah O. said…
I watched the show last week and thought that it was alright. I agree that it wasn't promoted enough, so I didn't know what to expect. I like the idea that they gift a dress to a deserving person and use local materials. However, I never would have pictured Austin and Santino together because their personalities and PR design concepts were so different. They are an odd pair, but I'll still continue to watch.

Sarah Dee said…
oh my, I didnt even know they were doing this show (bad lifetime advertising!) and I just watched the link, I LOVE IT!

queengilda said…
i had no idea they were gonna do the show either; good thing it was after project runway!!

i adored austin when he was on project runway... and it's really funny because i have a friend from parsons who is EXACTLY like austin, in their mannerisms, height, skinny-ness, hair, everything! *but he'd probably hate that i compared them*.

i'll definitely keep watching if i remember to tune in. i LOVE gingham and thought the dress they made was terribly adorable, and i love that they added that leather detail on the waist! it was really cute; i'd even buy it.
August 3, 2010 at 9:21 PM

JIM Designs said…
I liked it too! Hope they can keep it interesting and good quality! So happy to see the models show go...

seonagendra said…
This comment has been removed by a blog administrator.
August 4, 2010 at 8:09 AM