This week Heidi appeared on the runway followed by a stream of models wearing the most fabulous hats, which were created by none other than Philip Treacy. My experience with Philip Treacy's hats began through his work with Alexander McQueen resulting in a love-at-first-site kind of connection. Even though I've been sick and foggy-headed all week (so much so that I've been dreading this post), my brain perked up when I saw those hats parading across the runway. Sadly, we don't have a cast of young McQueens so the designs didn't live up to the majesty of the hats. However, I have to give season 8 credit for coming up with much better challenges! 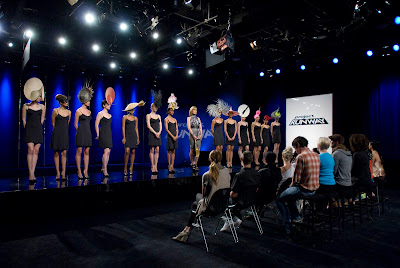 The contestants were allowed to choose hats, but had to take the model that went with it. Surprisingly, all of the designers stayed loyal to their models, even Peach who has a model with an attitude. The hats were placed in clear boxes in the designer's lounge to be observed while designing. (Thank you for not letting the designers manhandle the hats!). Philip Treacy, who also served as the guest judge, fitted all the hats before the models went on the runway making him the only judge who got to see the looks before the runway. Philip Treacy does not have a poker face, no matter how nice he tried to be. Also, Heidi made sure she got in on the action by wearing the upside down rose hat (pictured above). (The producers cut in a clip of Seal's "Kiss From A Rose" when she walked out wearing it.)

I didn't get Gretchen's look this week. I like the fluttery shirt/dress thing (as a shirt). The leggings look a little like they're trying too hard to match the hat. I really don't get the leather looking pieces on the inside of the legs. I think the leggings would be better without those. I guess they go with the belt. Overall, I'm just confused by this look. I don't really hate it, but I certainly don't love it.

A.J. made a big come back from last week's party challenge. Last week should have been his week based on his portfolio, but he hasn't successfully done anything thing like that on Project Runway. I'd like to believe that's because he's growing as a designer and his taste is growing up a bit. This is still quirky, fun and playful, but in a much more fashionable way than the Paris Hilton party dresses from his casting video. I hope we see A.J. continue in this direction. (Also, note to Peach: You can do better things with polka dots. See?) 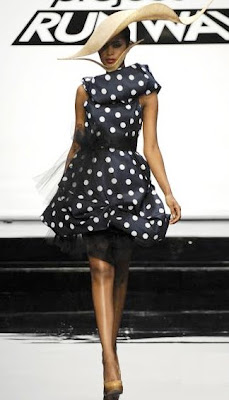 Andy's look needs to be seen walking down the runway. This pictures just doesn't do it justice. (Model! Stop posing like that!). I was shocked not to see it in the top three. My only guess is the judges were ignoring him because he had immunity this week. He took on an ambitious about of tailoring for the time frame and the details look great with the hat he chose (also hard to see in this photo). Another great look from Andy.

Ivy went to the hospital at the end of last week's episode because of dehydration. They took great pains to show her eating and drinking during this episode. Her time at the hospital was not wasted, she drew inspiration from the hospital curtains. The back of her jacket was wonderfully draped, but Lifetime failed to provide a photo of that. It was a nice look, but a little safe. I would like to say "No!" to those shoes with that outfit.

Peach kept her moody model and got this pretty fabulous hat. She made a tight short print dress to please Heidi. OK? It's better than some of the stuff we've seen from Peach, but what does it have to do with the hat? I'm pretty sure Target sold this in aqua this past spring. Meh.

Casanova continues to not understand anything. Tim warned him that this dress has been made a hundred times before. I actually own a few that are very similar just not as well made. It looked nice with the hat but didn't add anything. It was just a little black dress. I'm pretty much done with Casanova. He clearly has a pattern of being crazy one week and boring the next. ZZZZZzzzzzzzz........

Mondo deserves credit for being fearlessly unique. It's hard to see, but his model has a mustache this week because, as Mondo said, "She wearing menswear this week." The whole thing is kind of a mess and kind of amazing at the same time. How does one think this up and envision it with that hat? I'm just not sure what to say about this. I feel like the House of Holland crowd would get this, but I like it better than anything I've seen from House of Holland (that's not saying much). Thoughts?

Valerie made it into the top three. I really believe this spot belonged to Andy. Philip Treacy seemed to agree that it belonged to someone else because he didn't understand why the other judges liked it so much. I'm with Philip on this one. It's a nice dress made very well. I give her credit for not going with a long Gothic ball gown, but a little pink dress with kind of edgy details doesn't seem right either. Valerie had one of the more understated (if you can call any of them that) "hats" of all the designers. I would have like to see more innovation.

Michael Costello was forced to scrap his dress halfway through the day and ended up creating this simple but lovely fairy dress. I do like this dress. I also like his choice of fabric and color to go with his hat. He didn't go matchy-matchy, but he did make the shimmering pieces go very well together. Nina liked that he used the nude shoe since it was just about the hat and the dress. He deserves credit for all of that, but the dress just isn't that original. I don't know that it deserved a win. (I will admit to being slightly touched by how happy he was to win. Also, he cries a lot).

Michael Drummond had my vote for the win this week. Upon seeing this hat he immediately locked onto the themes of farmer and warrior. He also wanted to incorporate the sun in some way. His fabric choices were innovative. The top locked almost like it was made out of corrugated cardboard. The skirt added softness, and he used a cool ironing technique to create that crinkle texture in it. He really captured the spirit of the hat. In my book, Micheal Drummond gets the win since he really fulfilled the challenge of seeking inspiration from Philip Treacy's hat rather than simply making a dress that went with it.

Christopher chose a really cool print, but the over styling, terrible leggings and heaviness of the look landed him in the bottom three. When I first saw this vest/coat thing during his talks with Tim, I loved it. It seemed to have much more movement on the dress form. It would have been really cool over a gauzy dress with no belt. The edgy look didn't capture the airiness of the hat. The judges called it dark, sad, stiff and dated. He made it safely to next week though.

April sent a diaper down the runway. Michael Kors called it a triple panty as though she was going on vacation for three days and wore all three pairs layered so she could just peel one off each day and have a new pair on. I liked where she was going with her idea at first. She wanted to do futuristic resort wear, but she went the wrong direction after that. Michael Kors said she picked the right category but got the rest wrong. They tried to find positive things to say about it like the jacket/top/vest thing wasn't that bad. Or how they liked that she did separates. I think they were coming up with reasons to keep her because she's done a few interesting things, but I'm not sure she deserved that little bit of praise. This was just bad. (Also, the diaper has a huge, exposed black and silver zipper up the back.)

Kristin was sent home. I'm not sure her dress was as bad as the diaper, but she probably had the best hat and really failed to live up to it. I'm not into Kristin's style. I've always found it a bit messy and bulky. I know it's a matter of personal taste, but I'm not attracted to her work at all. Nina criticized the matchy feel of the pink in the dress and the model's pink toenail polish and the little flower shoes. It was too literal and too far from the idea of the flower (which Kristin seemed to understand in the work room, but failed to execute in her design). This is a very feminine and sexy hat in a very literal way. None of that came across in her design.

How do you feel about the winner and the loser? Do you think the judges made the right choices? Do you think they should have listened to Philip Treacy more since these were his hats? Who are your top picks after this week? Michael Drummond is growing on me. What do you think will happen in next week's team challenge? Who do you want to see go home soon?
Project Runway

JIM Designs said…
I wrote about this also, although not as well as you :)

Rachel said…
I think they got the loser right (it just looked like it fit poorly and was not well made to me), but I agree with you that Michael Drummond should have won. The winning dress was really pretty, but Drummond's look was way better.

Kschenke said…
I thought the idea of the resort wear was interesting, too. I wish she hasn't gone so dark with the black vest. If she had put in some light colors and some shine, it could have been something really inspired. And no diaper. :P
September 9, 2010 at 7:36 PM