By becca - July 20, 2010
After a rocky start on Lifetime during the sleepy sixth season, Project Runway picked it up with a far more interesting and surprising season 7. My three early picks for possible winners, Amy, Maya and Jay, didn't even make it to the top three. This season, which starts on July 29th, has some promising talent. We'll just have to wait to see if the challenges are better than last time. Here is a round up of the first eight designers. Check back Friday for the final nine. 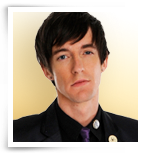 A.J. Thouvenot, as 26-year-old designer from St. Louis, is the co-founder of TrashBiscuit, a fashion label also from St. Louis, MO. A.J. cites Heatherette (where he interned), Jeremy Scott and John Galliano as his favorite designers. His style icons are Paris Hilton and Cyndi Lauper. He'd also love to dress Katy Perry.
Snap Judgment: I find Heatherette annoying. Paris Hilton's fashion is pretty much my "don't do" list. So, this guy's probably not my style. However, I can see him dressing pop stars. I love the rose dress (below), but the rest looks like it belongs either in the Barbie Dream House Closet or Barbie's nightmares. This sort of flamboyance usually lasts at least a little while. It's just a matter of when the judges decide to start questioning his range and "taste level."
Fun Fact: Started out making costumes for drag queens and local club performers. 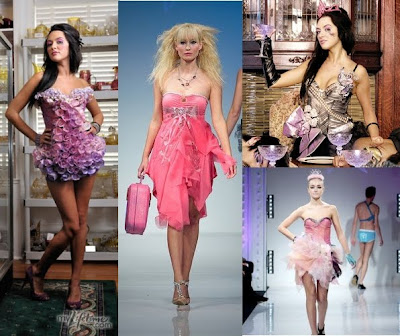 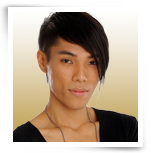 Andy South, a 23-year-old Hawaiian designer, names Yohji Yamamoto and John Galliano as his favorite designers. His fall 2010 collection was inspired by Asian culture with unique detail like paper lantern-inspired sleeves (see his audition video). He calls Audrey Hepburn his favorite fashion icon.
Snap Judgment: Andy has a pretty strong point of view. The few evening dresses (except for the wedding dresses) didn't look as strong has his other designs, but those could be old or commissioned work. Overall, I expect him to do pretty well. He has unique ideas and quality craftsmanship.
Fun Fact: Once worked as a Michael Kors sales associate. 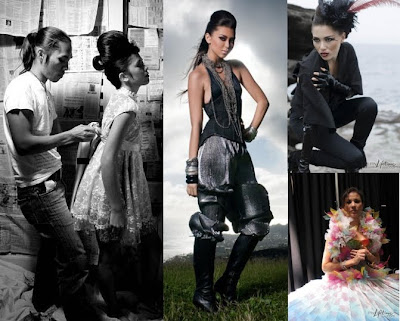 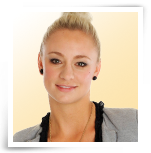 April Johnston, a 21-year-old from Savannah, GA, just graduated from college. She loves Alexander McQueen and John Galliano (he's popular with this season's cast). She likes Tim Burton movies, cites Lady Gaga and Santigold as fashion icons and did a mentorship with Zac Posen.
Snap Judgment: Her self-described "dark doll" aesthetic intrigues me.Her sketches are works of art themselves, but I'm not sure how that will translate in the 20-minutes-to-sketch world of Project Runway. She's young, which works to some designer's advantage like Christian Siriano, but it also works against others like Maya Luz, who dropped out before making it to Bryant Park. I think she'll do pretty well though.
Fun Fact: The first garment she made was her prom dress. 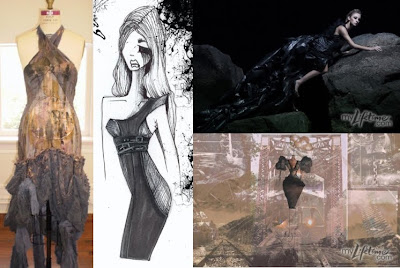 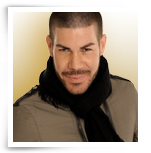 Casanova only has the one name. Well, he has two, and the first one is Carlos, But he wants to just go by Casanova. He is a 33-year-old designer from Astoria, NY. John Galliano is also his favorite designer. The first garment he ever made was a mesh dress with Ostrich feathers around the hem. (Of course it was).
Snap Judgment: Two of the dresses he brought to casting were nice, but boring and unoriginal. The other two, one that looked made of taspatry and the other a "naked" sequin lace dress, were quite unique. His online portfolio is a bit limited so it's hard to tell what he's capable of or what he'll do.
Fun Fact: Previously worked as a Red Carpet Host. 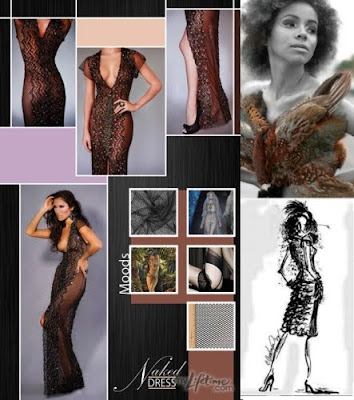 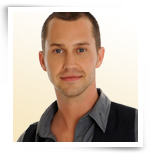 Christopher Collins is a 30-year-old designer from San Fransico who cites Dita von Tesse as his fashion icon and would love to dress Madonna. He is also selling his designs online so he has experience with making his clothes for retail. His favorite designers are Lanvin and Dior (I have to wonder if he means Christian Dior or John Galliano for Dior).
Snap Judgment: His clothes are wearable, but I'm not sure they are exciting enough to make the judges take notice. He will make it through early rounds, but unless he takes it up a notch, he will go unnoticed and un-judged until he makes a fatal error.
Fun Fact: The first garment he made was a coat for his grandmother. Awww. 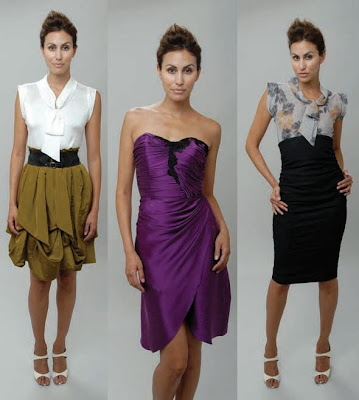 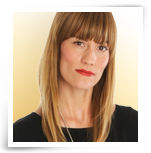 Gretchen Jones, a 28-year-old designer from Portland, is an Etsian, but her shop is currently empty. Her style icon is Chloe Sevigny, and her favorite designers are Vena Cava, Halston, Rachel Comey, Chloe, Isabel Marant and Vanessa Bruno.
Snap Judgment: Her style has an organic, wearable, easy feel, but it isn't boring. She seems to have mastered the fabrics she uses. I want to wear some of the pieces in her casting video, but I'm not sure how her talent will translate to PR challenges. Still, I have to cheer for an Etsian.
Fun Fact: Started creating fashion portfolios in second grade. 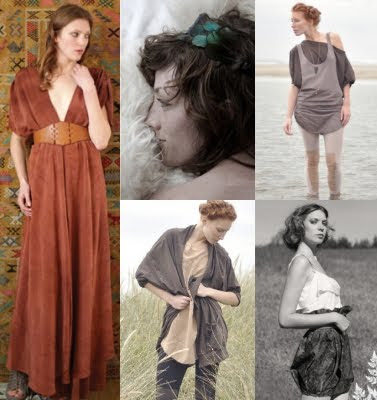 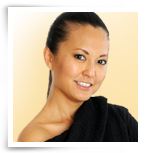 Ivy Higa, a 30-year-old New York designer lists Marc Jacobs, Consuelo Castiglioni, Stella McCartney and Issey Miyake among her favorite designers and Coco Chanel as her style icon.
Snap Judgment: Her clothing seems simple, but much of it is convertible, and all of it is well constructed and interesting. She plays well with proportion, which should be to her advantage when they get the inevitable non-model challenge. The subtleties of her work may leave her in the safe zone for too long, which was Ben's fate last year, but she could also create a lot of pieces the judges will love.
Fun Fact: Was one of nine finalists in the Oscars Designers Challenge. 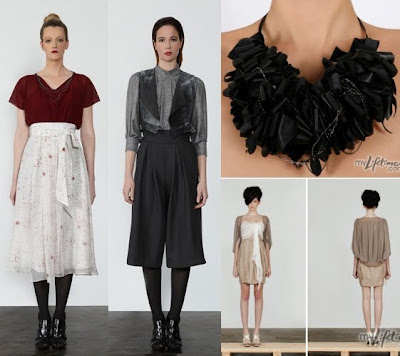 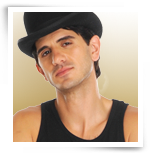 Jason Troisi, the 33-year-old landscape designer from Greenwich, CT, prefers to name only himself as his favorite designer. His work has military inspirations. He went to fashion school, but it doesn't seem like he's worked in the fashion industry at all. He has been designing collections though.
Snap Judgment: He has interesting ideas and a strong point of view. He uses some different fabrics, puts boning in unique places and isn't afraid of heavy hardware or color. He's auditioned before and seems to have watched the show quite a bit. Those things always help when tackling the PR challenge.
Fun Fact: Vincent Price is one of his style icons. 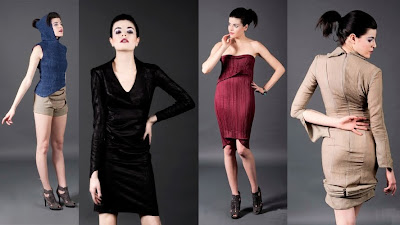 This video preview has confirmed what I suspected when I heard there were 17 designers this season instead of 16. The designer face the possibility of a double elimination in the first episode. In fact, Heidi and Tim say they are still auditioning.

What do you think about the first half? Are you excited for this season? Any favorites so far? Don't forget to check back on Friday for the rest!
Project Runway

Jael Paris said…
Audrey + Yohji? That sounds like you, becca.

I liked April more when I thought her style was "dork doll".

Gretchen's inspiration list makes it seem like she knows her stuff and herself better than some of the other designers.