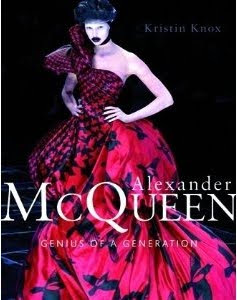 Pros: The pictures are large and lovely.

The book is around $20, cheap for a fashion book.

Cons: This book is a newspaper obituary when we want a full on memorial.

No Oyster Dress (left)? Many important looks in the evolution of his design and career peaks were left out. Meanwhile, some of the pieces were pictured twice. 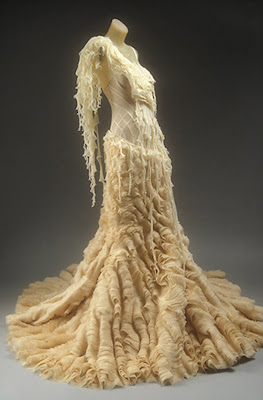 Many typos on the years.

The writing is repetitive, and there's little here you can't learn from Wikipedia or the original Guardian article so frequently referenced. Heck, this blog post by a British economics student has more info and pics, and I'm certain he had less access than the author of this book.

There's little explanation of what the idea behind the show was or what the spectacle of a show was.

At least nine main seasons are missing,including "The Golden Shower", the show with water on the runway, and "The Overlook". Only one image from any of the Resort shows pops up (and it's tossed in with another season); Pre-Fall is completely ignored. Menswear got two pictures; McQ got nothing. If you expect more than one image per show, this list would be even larger. 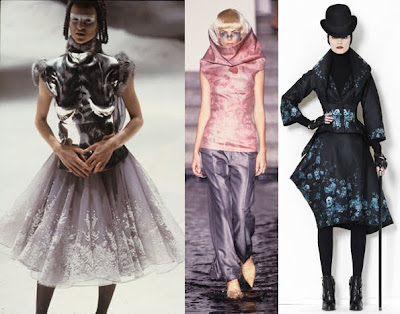 All these shows were left out.
What I really want from a book on McQueen:

Unknown said…
I've just recieved this book and think it's amazing, but now that I've read your review I realize how little information there really is in it and how many pictures are missing. Thanks for your review- it's really interesting.
www.styleisalwaysfashionable.blogspot.com
January 3, 2011 at 2:50 PM