By becca - June 08, 2010
The fashion at the MTV Movie Awards never lives up to the creative stylings found at the VMAs, but this year was quite a disappointment. Nearly everyone showed up in something short and sparkly and too generic to remember. If the dresses weren't short and sparkly they were the kind of pretty summer dresses I would wear to brunch not to an MTV party. 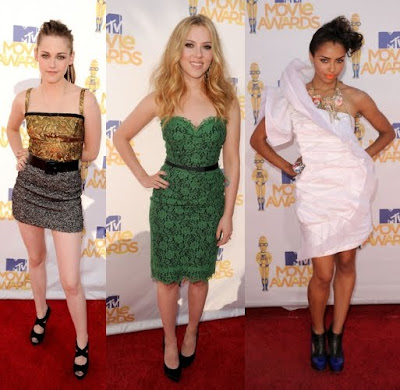 While I did like the outfits of Kristen Stewart, Scarlett Johannsson and someone named Katerina Graham (love this one!), the only person who pulled out all the fashion stops was Christina Aguilera. The question is did it work? Christina's previous album and persona were incredible. It's a tough act to reinvent, and I have to admit this incarnation of Christina is far from my favorite. I don't know if she's actually copying everyone or if all the journalists can help making comparisons to other singers like Lady Gaga. This look actually makes me think of Miley Cyrus' latest outing in her Can't Be Tamed music video (if the skirt doubled as wings). 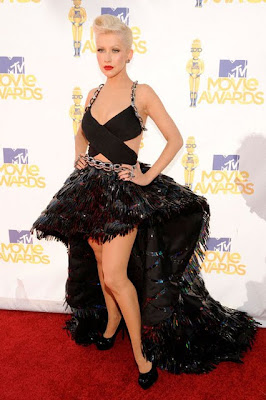 Regardless of who she may or may not look like, Christina wore the most interesting dress of the night. She stood out in the sea of sparkle minis. I love the chains. I think I like the skirt. I don't know how to feel about the top. What do you think of her dress?

P.S. Jael and I also loved Katy Perry's blue wig, but I feel like her dress of conveniently placed sparkles has been done a thousand times.
celebrities