By Jael Paris - May 06, 2010
We love the Metropolitan Museum of Art Costume Ball, but even that event seems to have been tamed the last few years. Celebs failed to mine the rich superhero territory a few years back, and the Model as Muse theme was a bore. The costume event this year centered on the American woman...so lots of Calvin Klein and Ralph Lauren? Actually, with Gap as a sponsor and their head designer, Patrick Robinson, on the panel, several celebs wore Gap. Of course it was "Posh Designer Makes One-Off For Gap and Normal Americans Can't Have Such Collaborations" gowns. And they weren't too interesting. It seems most celebs and designers (I only covered American houses below) stumbled with this theme as well.

Oprah looked the part of the American woman on the sheer merit of being Oprah. The woman lives the American dream and looked splendid in navy Oscar de la Renta. Love how the dark beading at the waist makes it small, better serving the deep neckline and full skirt. 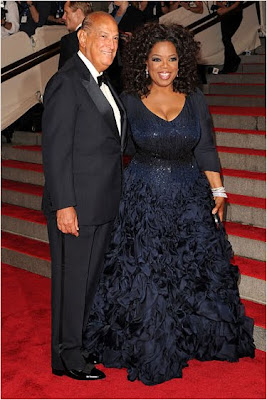 Maybe Riley Keough, in Thakoon for Gap, could also lay claim to being the most American woman on the red carpet. After all, she's Elvis' grand-daughter. (Thakoon clearly envisions the American woman as a creature who doesn't have time to finish having her hair done.) 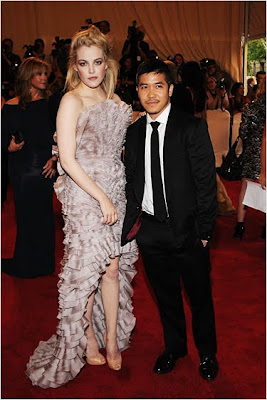 Nicole Richie in Marc Jacobs was equal parts flapper and Hollywood screen siren. Coco Rocha in Zac Posen was merely all parts mermaid. Seriously, she has a fin under there. Giesele and Alexander Wang want us to know that the American woman is so sexy, she can wear a shredded seat cover. 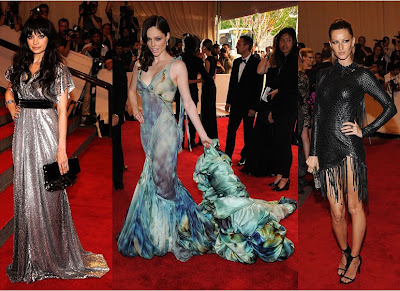 Vera Wang is telling us here that American businesswomen are resplendent while starlets who I don't care about are messy. 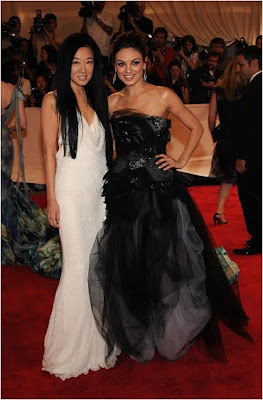 Sorry, not a woman. Even so, Joshua Jackson is rocking the ascot. Very laid back for a man in a tux.

What does it say about American design (and about me) that the most interesting dresses of the night were from European houses?

See all 102 of the snap-worthy attendees at The Cut.
celebrities

Grakisaurus said…
my overall favourite was Nicole Richie, just thought everything about it was beautiful and stylish!