By Jael Paris - May 26, 2010
Wearing images of skulls in nothing new, but it exploded as a trend most recently with Alexander McQueen's Spring 2003 pirate show and the debut of his skull scarves. Since then, they've ebbed and flowed as a motif. One week they seem to be confined to rocker style attire, the next Rihanna shows up at an awards show in a feathery dress with a skull clutch and they flood out again on all things glam. 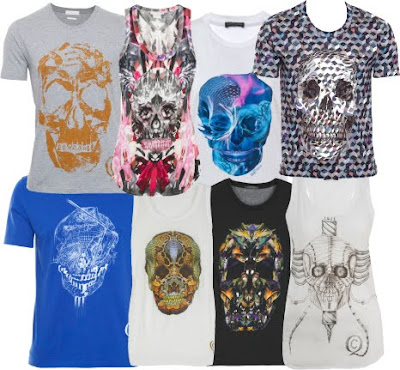 My husband told me he finds the trend morbid, reminiscent of a Victorian death cult. Some people have told me they associate it with the mall punks and their forced coolness. Personally I like skulls because I find them beautiful. I find bones of all kinds beautiful, but skulls in particular are entrancing. Unlike a face print, they're anonymous, allowing the shape be prominent.

What do you think of skulls in fashion?
love or loathe trends

Rachel said…
I'm not a fan but didn't really think about why until now. I think It's a mix of dislikes... mostly the forced coolness thing. It just seems like a funny trend, especially the cutesy skulls. I'm an anatomy geek, but personally I'm not drawn to wearing bones (except maybe a killer pair of vertebrae earrings...).
May 26, 2010 at 2:52 PM

Sarah Dee said…
I dont like skulls in fashion, I think its mostly the whole forced coolness factor, almost like trying too hard...