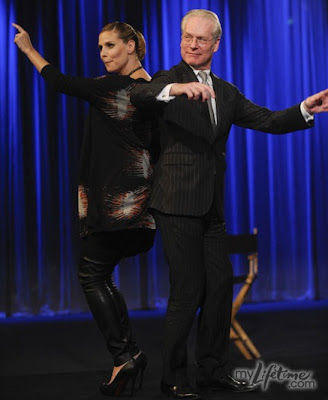 Last night was the episode that determined who is going to Bryant Park and who is out. For their final challenge the designers were taken to the circus where they were treated to a private show (jealous!) for inspiration. Thirty minutes to sketch, thirty minutes at mood, three hundred dollars, and two days to design their outfit from the circus tent that would take them to the fashion week tent.

I've been bored by several of the challenge this year with the designers creating looks for Heidi twice and gala gowns. This challenge ranks up there with the hardware store and create your own print challenges. Plus, who doesn't like to see some of the circus?

I've mentioned a few hundred times that I don't like Emilio. I usually don't care for his designs and don't understand why they win or why the judges love them. However, I loved his design last night. This dress really did capture that circus feel, but yet could have even been worn on the red carpet. (I don't why I keep dressing Pink, but she could totally rock this with her recent circus-themed album). The stripes, polka dots, pick-ups, ruffles and pop of color all work. If his collection for Bryant Park looks like this (which I doubt), he'll be tough to beat. The judges loved it too and gave him the first fashion week slot. 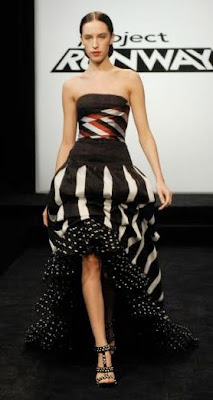 Seth Aaron came quite close to beating Emilio's looks, but he had some issues. The pants were not tailored well. We've seen him make lovely pants before so I'm not sure what happened here. The jacket was wicked cool, but perhaps a little to reminiscent of his winning jacket. I understand the idea of exaggerated limbs, but I would like a cool cuff on the sleeve rather than having the model's hands swallowed by fabric. I do like that the look could work without the jacket (if the pants fit better). It would still have a circus vibe with the high collar shirt and shiny red pants. The whole thing is very Seth Aaron, which the judges found worthy of the second fashion week slot.

As much as I wanted Anthony to make it to fashion week, I knew this blue dress wasn't going to carry him there. It needed something more. The judges complained about his polyester fabric and thought it just missed. I'm sad we won't have his personality at fashion week, but I'm glad we did get two extra weeks with him. I hope we see some red carpet looks from him in the future. 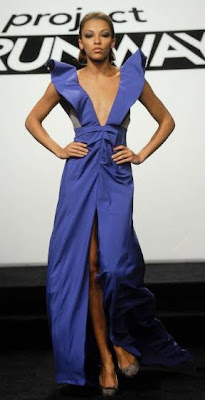 This left Mila and Jay, arch rivals, waiting to see who was in and who was out. Mila's look was a bit too much for me. This is a fault she's never been accused of before so I'm glad she was pushing herself. However, the shiny jacket with pink shiny pants and a yellow shiny top was just too much shiny. The collar and jacket didn't live up to the drama of Seth Aaron's look. Without the jacket this look would just be a shiny yellow top and shiny, high-waisted pink pants. Ick. I haven't even seen clowns wear that. The jacket was pretty cool. If it had been the only shiny thing, I would have loved it.

Jay's ringmaster look seemed to win over the judges, but they still thought it was a little off. Even though it was plain black under the jacket, the judges loved the tank and pants separates. I'm with them on the pants, but that tank looks a bit dangerous to wear. I love a ringmaster jacket, but something out this one does look a bit off. I liked Jay's early stuff. I really like his ideas this week. He tackled interesting pieces with a circus theme.

The judges announced that Mila was in. Then, they announced that Jay was also in (dirtiest look ever from Mila). These two will be creating collections and battling it out to see who gets a spot at Bryant Park.

Who are you routing for? Which outfit was your favorite last night? Which one was your least favorite? Who do you think will win the whole thing? And why does Emilio have to be so mean to Tim? I'm dreading that home visit next week. Poor Tim.
Project Runway

Rachel said…
Seth Aaron is still my favorite, but I'm sad to say that I loved Emilio's dress too. Sigh.