Project Runway: The Other 7 Shows

By becca - April 27, 2010
This season Lifetime decided the best way to avoid spoilers during fashion week was to allow 10 of the 16 contestants to show collections at Bryant Park. Sure, they avoided a lot of spoilers, but I think they robbed the top three, or at least the two that didn't win, of that special reward that is just getting to show at Mercedes Benz Fashion Week. However, they did give us a little gift by letting us see what some of our favorites would have done had they made it to the top three.

Amy was a favorite of mine from the minute the contests were announced. On the show she proved to be fearless. Her ideas didn't always work, but she never valued staying on the show more than taking a risk to execute her vision. This kind of attitude will make her a great designer. She showed her risk-taking skills at Bryant Park with a look that challenged conventional shape and proportions. She used a variety of techniques in her short show. She was a strong competitor and will continue to be just that as she pursues her career. 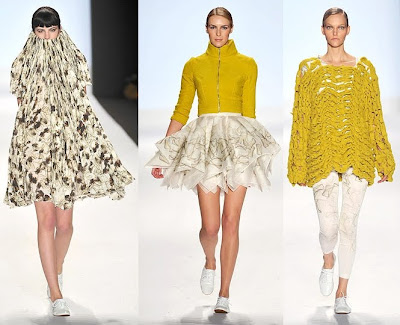 Anthony was a fan favorite this season. His clothes may have only occassionally wowed us, but it wasn't just about his clothes. We all fell in love with this adorable Southern Bell. We cheered him on because we couldn't imagine a week without his personality filling up the workroom. Anthony's personality flowed into his collection as did his great growth during the season. It was bright, glitzy and ready for an enterance. He opened with is most over-the-top item of crazy sleeves and sequin pants, which I kind of love. He made several dresses that are totally red carpet ready. Jessica Alba won't be the last celebrity he dresses. (Can Lifetime give him show where he dresses various celebrities. That would be fun.) 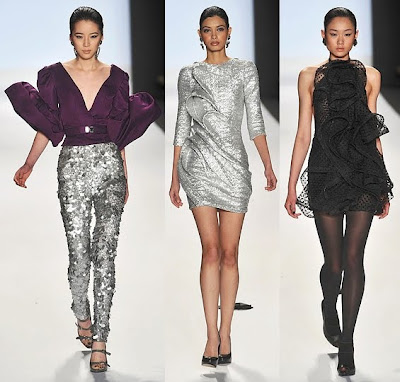 Ben got lost on the cutting room floor. His portfolio was strong. His pieces had impeccable craftsmanship and lovely details. The judges just didn't look closely enough at anything he did. When he tried to amp things up just to get noticed, they cut him. It felt as though they just decided to ignore him most of the time. Even though he was long out of the competition, he made sure his collection wasn't ignored. He used bold colors and armored details. He had his fighting designs on, which I liked quite a bit. (It did remind me a little too much of Julian Louie's Fall 2009 collection). I plan to follow his future work. 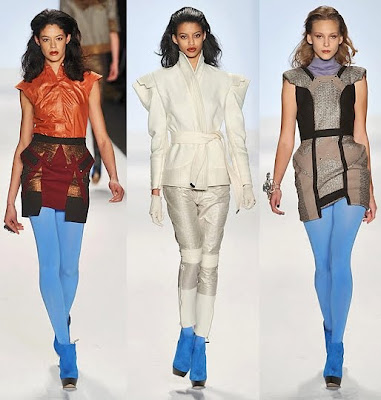 Janeane bothered me from the very beginning. She never seemed to really know what she was doing or how she was going to do it. I was annoyed she made it as far as she did. I think she has the capability to make nice clothes, but wowing the judges and working under pressure are not talents she possesses. Janeane's collection was mostly flowing basics with some nice details. It was pretty boring, but I might buy a piece or two if I saw them at Kohl's. 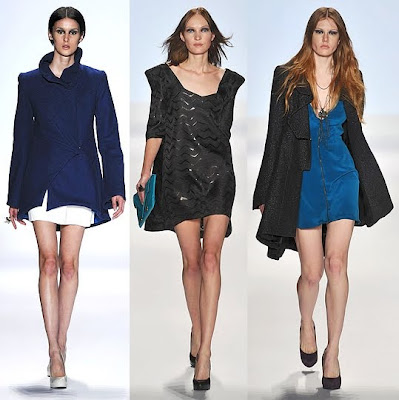 Jay had been a favorite of mine until I saw his childish, catty behavior on the reunion show. Now, I'm just glad I don't have to look at him anymore. (You're on TV kid. Behave). He had a shot at making the finale, but he fell short. Had he shown the judges these three looks rather than the other three he may have had a shot. I'm not sure why he selected what he did. He had some very pretty dresses, a great vest (middle), and softer variation of the gaiters he showed the judges on the runway (still want!). 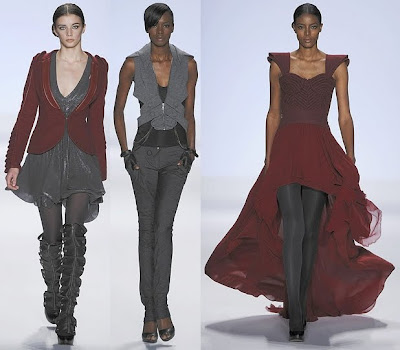 Jesse got a bad wrap this season after being forced to work with Ping. She got offended every time he asked a question and the edit only showed his frustrated moments for drama's sake. I can't imagine trying to survive a group challenge with Ping. His clothes during the season weren't terribly memorable, but he was usually quite good. His collection had some interesting pieces. I liked his jackets, accessories and leather dress. However some looks (like the left one) looked a little too cartoonish while some pieces looks too simple and boring. I'm still intrigued by what Jesse will make in the future. 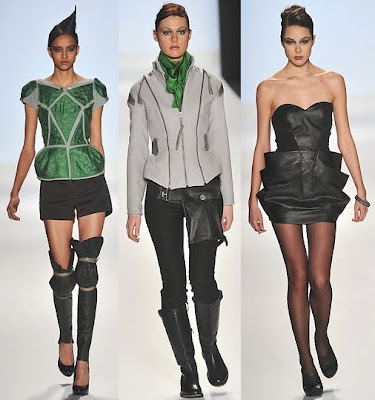 Jonathan earned my award for most insightful and articulate contestant of the season. His commentary was always great, and he could put things in perspective with concise sound bites. They should have him doing commentary blogs for following seasons. I liked his sense of color too, which sadly went very dark for his collection. It wasn't bad, but not the lovely softness I'd come to love from him. I didn't care for his pantless looks, but his wide leg pants weren't as flattering as they should be either. The boob curtains are just strange. I'd rather see a spring collection from him. 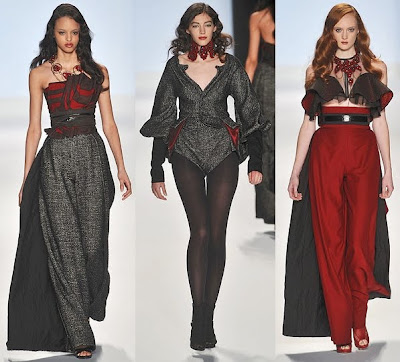 Who's collection was your favorite? How do you feel about so many designers showing at fashion week? How could Lifetime combat the spoilers without letting almost everyone show? Also, I'm experiencing Project Runway letdown after nearly back to back seasons. Watch for some Runway related book reviews and news on Tuesdays for the next few weeks.
Project Runway

The Vintage Stylist said…
Amy was a favorite of mine as well. I enjoyed her on the show and the collection she showed at Bryant Park.
April 27, 2010 at 3:37 PM

Robin said…
As soon as I saw the thumbnail of Amy's collection on my notification bar, I came on over. One I realized it was Amy's, and saw it up close, I totally geeked. She definitely retains her spot as my favorite! I want to curl up in the yellow jacket and poofy short skirt and live in it forever.

Rachel said…
From the ones you showed us I actually like Anthony's the best! I'm kind of surprised since I really did like his personality way more than his clothes. That middle dress is gorgeous!

Ben was an early pick for me. It's too bad he got ignored.

It's fun to look at these, but I still agree that letting almost everyone show their collections at Bryant Park kind of ruins the competition. I'd rather have spoilers than that.