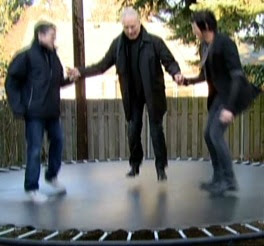 Season seven of Project Runway is nearing its end. Last night, we learned which three designers would be competing for the $100,000, fashion spread in Marie Clarie and distribution deal on Bluefly.com. I'm glad they sweetened the prizes a bit with the Bluefly.com deal because they pretty much took away the prize of showing at Bryant Park. True, the top three designers do get to show, but seven other designers were given the same amount of money and time to create decoy collections that also made appearances at Bryant Park.

Lifetime did this so there would be no spoilers about who the finalists were, but it really takes away from the experience of those finalists. Sure, the winner gets some extra prizes, but almost everyone gets to have a collection show at Bryant Park, meet press and important contacts, and share in all the free publicity. No one really needs to win or even make it to the finals now. All they need to do is survive long enough to be offered a decoy spot. Doesn't really seem fair, but at least we'll get to see collections for our favorites who may not have made it (I might post reviews of some of these collections after the finale).

This week Tim did the traditional home visits, which included jumping on a trampoline, getting yelled at by Emilio, and guessing "fallopian tube!" during a game of Pictionary with Seth Aaron's children (the correct answer was stethoscope).

Seth Aaron's home visit reveals that Seth is even more crazy-awesome than we thought. He already had 15 looks created and only 10 are required. He told Tim he wanted to create 20 looks and edit when he got to New York. Tim loved several pieces. (And I would love to buy several pieces--jackets!). However, Tim worried that these pieces were too similar to his efforts during the challenges and told Seth Aaron to re-imagine his collection and push himself beyond what the judges have already seen. This put Seth near tears since half his time and money was gone at his point, but I think he had plenty of time to add wow-factor to the pieces he had. I love what we've seen so far, and I can't wait to see the collection next week. 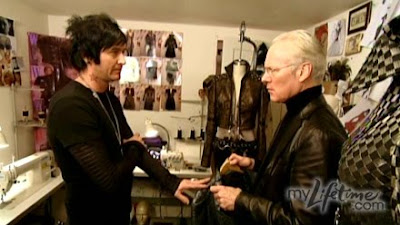 Emilio. Ugh. Let's make this quick. Emilio's collection so far features another monogram print (in multiple colors this time--see blurry picture below right), some spray paint or rainbow atrocity, and olive velour--ick. He was mean to Tim, while Tim was just trying to be helpful. And nobody likes him. Please promise to riot with me if he wins.

Mila's home visit showed us just how deep her love of black and white goes. My favorite moment was learning that her dog, Ziggy, is a Dalmatian. She and her boyfriend both donned mostly black outfits. And her collection only featured a few pops of color. Overall, the collection looked pretty good during the home visit. Tim worried about color, but seemed to mostly like the retro vibe. 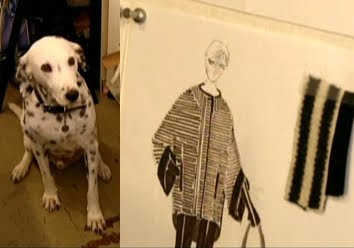 Jay invited Tim into his workroom to show him a collection inspired by Japanese Samurai. Tim loved a lot of if, but worried that some of it looked like student work, as though he were trying too hard to be innovative. That struck a nerve with Jay. We also got to meet Jay's adorable, and rather teary-eyed, family. 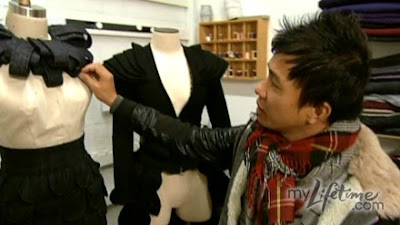 Everyone packed up for New York and Mila and Jay had their showdown. Mila chose three pieces void of color. She seemed a little worried when she saw that Jay was using color. However, she chose three knock-out pieces. The first look is full of easy to sell separates and accessories including a removable cowl. The jacket in the middle is stunning (and the shoes-wonder if she designed them). The final dress had the most appeal for the judges. I can see a slew of starlets wanting to appear on red carpets in this dress. The judges worried she was a bit too retro and told her to ruff up the styling a bit (to match the cool leather glovelets she had on the models). 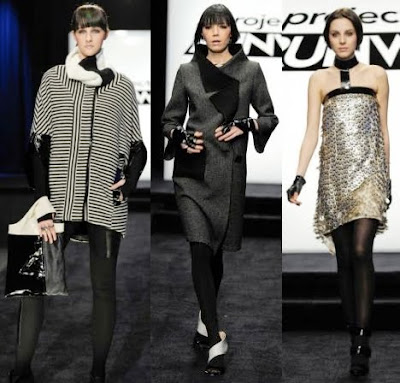 I haven't been a Mila fan this season. She had some great innovations, especially with the paint tray liner dress. I wish she knew how to use color better. I love black and white colorblocking, but I can only take so much of it. Her collection so far is also much more interesting than I expected. Another reason I haven't liked her is how she comes across on screen--not exactly warm and cuddly. However, I've been following her tweets, and come to really like her personality. She always answers my questions on Twitter too. I'm hoping she takes the second place slot.

Since the judges gave Mila the final competing spot at Bryant Park, Jay is out. He still got to show his collection though so I'm not sure he lost much since I didn't really expect him to win the whole thing. Jay had a lot more color in his collection than Mila, and the judges loved his innovation. They liked that he didn't rely on retro themes like Mila did. I think Jay made one huge mistake that "cost" him his slot in the competition--he chose the wrong three pieces. I peaked at his full runway collection, and these are not the strongest. Maybe he just chose his favorites, but had he chosen some of the more judges-friendly pieces, I think he could have beat Mila for the slot. The judges thought his looks were a bit too much, but loved his construction. I really like a lot of his pieces, especially the leather shin guards/gaiters/spats--Want! 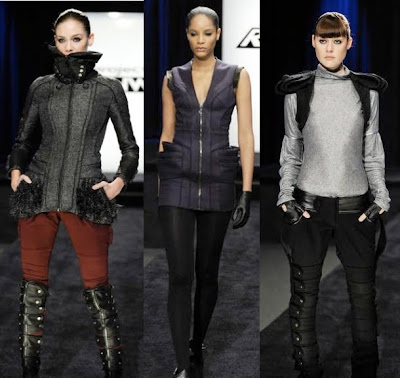 I tweeted last night that I wish the judges could have eliminated Emilio so we'd have a Mila, Jay, Seth Aaron finale because Emilio's collection look yucky so far. I was sad to see Jay go mostly because he was the last on my three original picks for Bryant Park (Amy, Jay and Maya). However, I'm happy to see Seth Aaron up there. How did you feel about last night's episode? Do you think Mila deserved to move on? Who do you want to win (correct answer: Seth Aaron)?

Also, I'll be live blogging the finale! I'll be posting details soon. Don't forget to stop by. You can even comment along with me (no signing up is required or anything)!
Project Runway

Rachel said…
I always agree with pretty everything you say :) Love Seth Aaron's stuff and want him to win. Can't stand Emilio. I was getting bored with Mila and Jay but liked both their collections. Nate and I actually predicted Jay would win this week (with the side note that since that was our prediction Mila would probably win) but I'm OK with Mila winning instead. I want to see those pops of color though.

It's really a bummer that 7 people get to show at fashion week!! Not that I mind seeing more collections, but it really makes the competition kind of a joke.
April 16, 2010 at 9:27 PM