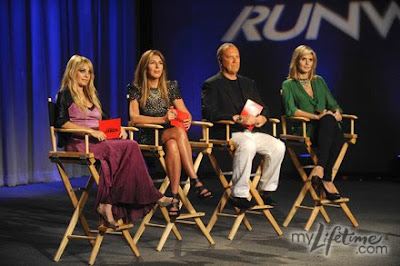 "This is Project Runway."

No, really, this is Project Runway. Whatever last season was, this season is setting everything right already. Three words: Michael. Nina. Heidi. Yes, they are all there. Oh, and a few more words: New York City. Ahhh. It feels good to be back.

The episode felt so good that I almost didn't mind Nicole Richie as a guest judge. She actually did a decent job. And, while I love a weird materials challenge to kick things off, the "show us who you are" challenge with traditional fabric wasn't bad either. (Next week we're off to a farm!) 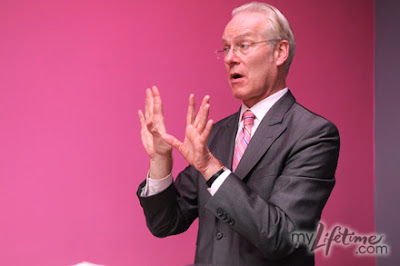 After the too-quick-to-process introductions (check out our snap judgments of the season seven designers for a little more detail) and the rooftop toast, Tim met the designers in Central Park where, as Anthony put it, Mood had hung their fabric to dry. The designers were forced to stampede and collect as much fabric as they could before time was up. Then, they had to choose just five fabrics from everything they grabbed. From those fabrics they had to create a piece that showed who they are as a designer.

I liked that the challenge required the designers to work with specific fabrics. For some, it helps to have some sort of starting point when designing something so quickly with such a broad description. It also tests the designers' knowledge of fabrics and how they can be used (a test that a few failed).

On to the clothes that weren't judged. These looks earned their designers a chance to compete next week, but these designers are far from safe. If these are the looks that embody who they are, I worry that they won't have much to say as the competition gets tougher. Pamela made this basic pink dress. I didn't mind it from the front, but the sleeves either need to make more of a statement or less of one. The back does not work for me at all. It feels unfinished rather than stylish. Nina's phrase of the night was "hanger appeal." This has none. Mila mixed prints for her look. The prints could actually work together, but I didn't feel the pieces were anything special. The jacket might have "hanger appeal" but I can get the skirt and top at Target. Speaking of things I can get at Target, Anna's dress was adorable but I have seen it a million times at a million stores. That must mean it has some "hanger appeal," but that alone won't get you far on Project Runway. The "who you are" challenge should so innovation and something special. 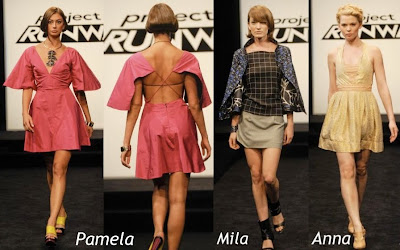 These next four designers created looks I quite liked. I hope they just keep improving from here. I really like Jonathan's dress, but I'd like to see it without the belt. Styling is important to the judges. Don't overuse the Bluefly accessory wall. Jesse (who worked as Capt. Jack at Disney World and will be referred to as a Pirate from now on) made an interesting suit. The jacket comes off to reveal a better look than this buttoned up version. I love that he did an off the shoulder jacket, but the front needed something (little lapels maybe?). Jay Nicolas was an early favorite pick of mine. I like his fabric choices and love the ruffled pockets. The belly poof--not so much. Edit. Janeane is the cry baby of the bunch. She wept at the thought of Bryant Park. However, she didn't let her tears stop her from "making it work." Her first attempt was detailed, but the fabric really puckered. In two hours, she pulled together these separates. Not bad. I'd like to see what she can do when she follows through her original vision. 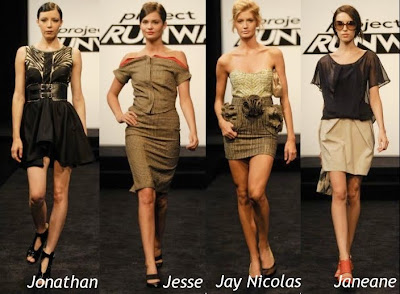 My three favorite looks didn't make it into judging. Amy was also an early favorite pick. I can't wait to see what else she does. I love the light, easy feel of the dress. I was thrilled to see she scored the harlequin print, and she used it well. When I first reviewed Ben's portfolio, I commented that he could really construct a garment, and he did not disappoint. I love the shoulders. Maya was yet another favorite pick (the last of my three favs). This reminds me of the Chris March/Christian Siriano couture collaboration, but in a fresh way. I love the drama and look forward to seeing more of it. 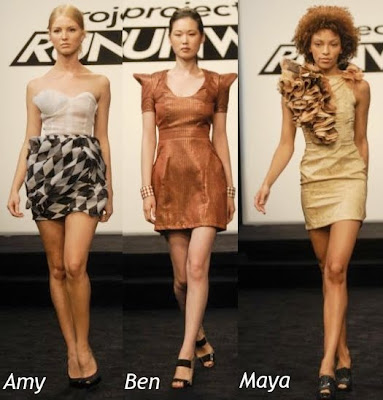 Ping was the most controversial designer of the night. Most of the other designers put her (with Christiane) among the worst designers. Several expected her to go home. When the judges left her on the runway, I assumed she was in the bottom three. However, she seemed to be a top three pick or at least a "so interesting we had to talk about it" pick. Ping is spacey and doesn't design on the dress dummy, but she has a point of view. It will be interesting to see how far that takes her. Nina said she lacked "hanger appeal," which is very true because even on the model it just looks like lots of fabric rather than clothing. Nicole Richie said she would wear a whole collection of this. Of course she would.

Seth was another top designer. The judges liked his modern punk look. They loved that he really styled the model for a complete look rather than just sending a dress down the runway. This kind of styling will serve him well. I just can't get myself that excited about it though.

Emilio walked away with the first win and immunity. Tim worried about him finishing, but he pulled off the intricate use of a print fabric to make is own pattern just in time. The construction was impeccable. Heidi said it was too cutesy for her, but Nina lauded its... wait for it... hanger appeal! I would totally wear it.

Anthony did not have hanger appeal or any appeal really. For a designer who says he dreams of designing for pageants (but not Miss America for some reason), I'm surprised we didn't get something over the top and shiny! This design did bring us the best quip of the night from Michael Kors--"She could go to a garden party and steal champagne bottles." Forget hanger appeal, this has function! I guess that's what got him through to next week.

Jesus has a lot of confidence, and it's misplaced so far. This dress looks more like a muddy snake than a glam design. It wasn't great when it was short, and adding on the bottom (which the judges totally noticed) didn't help it at all. Nina called it a Hershey bar, but I wouldn't want to eat it. Nicole Richie kind of liked it (taste level alert). MK said, "In a lounge in Las Vegas in 1972 that would be glamorous, but not now." Agreed. However, this 70s lounge singer will be appearing again next week.

Because Christiane is out. The other designers seemed to think this was going to happen in their confessionals. Even Christiane worried the dress wasn't enough to impress the judges. They said it was unsophisticated, lacked a theme, story or vibe, was poorly constructed, and should have had more ease since it was a draped dress. It's sad to be the first to go, but it had to be someone.

I have high hopes for this season. All seems right in the world of fashion television again. What to you think? Are your hopes as high as mine? Which designs were your favorite?
Project Runway TV + Film

It's a bold/edgy pattern on a very plain color. The gown is too much.

But as a mini? I love the neckline, and I would wear the mini with brown chunky wooden heels for a safari glam look.
January 17, 2010 at 8:48 PM