By becca - January 28, 2010
Awards season is in full swing. (Check out Jael Paris' Red Carpet wishes for the Grammys). This means the fashion world is full of best and worst dressed lists from every red carpet event. So, dear readers, I bring your two controversial dresses from the SAG Awards. 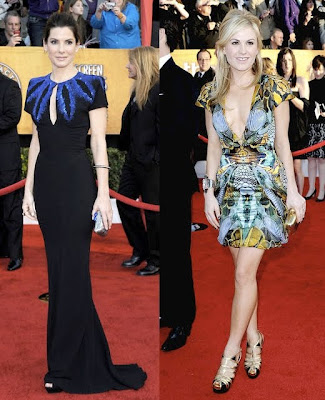 Sandra Bullock and Anna Paquin both chose FMF's favorite designer, Alexander McQueen. Both have been give best and worst dressed ratings for their choices. Sandy has had a few more "best dressed" points and Anna has landed on a few more "worst dressed" lists. I'm not so sure I agree with that. When I first saw Sandra's dress from the waist-up, I worried it might be a bit to matronly for her. While I agree that it is a lovely dress and she wore it well, I still think there is something about it that ages her. Anna's dress had been criticized for being to casual, but it's just the SAG awards. It's not the Oscars or the Emmys. I loved her choice. (I want to her dress). Some critics still think it wasn't red carpet worthy. What do you think?
poll by twiigs.com
celebrities Polls

Fanya said…
Like Sandra's dress. It's sharp and shapely. The blue neckline decoration and the angular shoulder made it not matronly. Altho it is a bit bland, would be better if she opted for more hair with more omph, or snazzier bangles...or outrageous shoes...
January 29, 2010 at 12:13 AM

Audi said…
They both look great; McQueen is such a perfect choice. I would steal that reptilian print dress right off of Anna if I got the chance. Love it!
February 4, 2010 at 1:49 PM