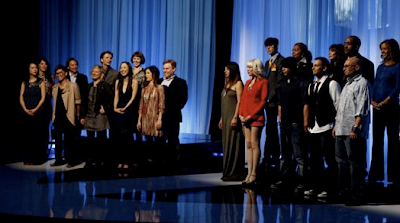 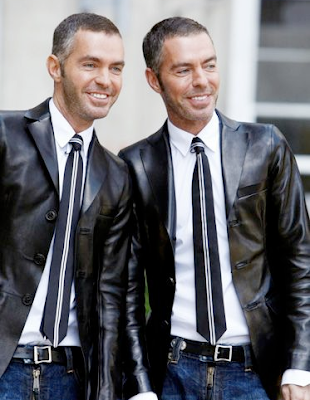 How: Each week, contestants create a new piece for their lines. They are being paired with expert designers to help them create their collections (many of the contestants can't sew or haven't worked in this aspect of fashion). Eliminations are weekly. Prizes include actually launching your line, some money (for the designer), and a spread in Lucky.

Why: To see if these design and fashion professionals can translate into successful designers. And, of course, to fill Project Runway-sized hole in Bravo's lineup.

Week 1
The Challenge: Create a line and vision complete with name and logo. Create a signature piece (inspired by the personal items that helped pair them with their designers). They also had to select all of their fabrics for their entire line on the first outing. The first half hour they had their experts' help. After that, they had to finish on their own. It was revealed that they have a "Trim Closet" where they can get extra trim during limited times, but without their experts' help.

The Workroom: The experts were helping them figure out the actual craft of creating designs. I see some major ego problems coming in here. These designers won't love being slaves (but they should enjoy their $50,000 prize if they win). 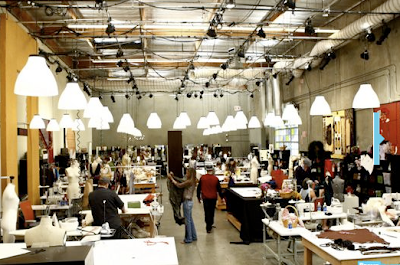 The Judges: With a fashion critic and fashion writer competing, as well as other high-up professionals, it seems some of the contestants could qualify to be judges. That might bring us some heated judging discussions and the season goes on and egos get bigger. Hosts Dean and Dan Caten of DSQUARED2 are two of the judges, which means they'll be able to include workroom critique knowledge in their judging. Lisa Kline, the boutique owner, and Stefani Greenfield, the fashion entrepreneur are also judging. So far, no gimmicky guest judges. 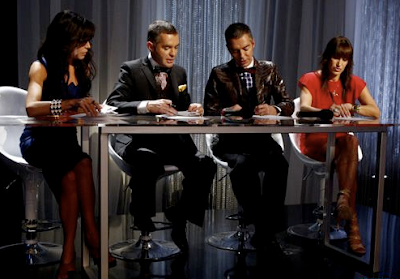 The Winner: The top three looks were quite good. My favorite (left) was also vote audience favorite. Marilyn, the CEO, made a last minute switch to this look for it's runway wow-factor. The shirt started off with a hood that came down to create a lovely cowl neck and later slid off the shoulder for an evening look. (Marilyn, see me after this post, I'd like to place an order). The middle look by Merle, the fashion critic, was even more convertible. The peplum dropped to reveal a fringe skirt, which came off to become a scarf revealing an LBD, which came off to become a jacket revealing the champagne dress underneath. The winner was Louanna, the stylist, with this silver dress (right). I thought Marilyn should have won. I hope red carpet attire doesn't consistently beat office attire. 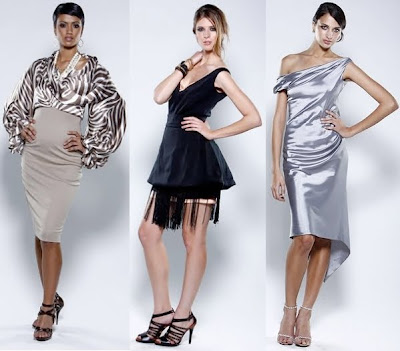 The Elimination: Vanessa, the event designer, created this shiny jumpsuit number (left) that the judges called costumey. Her bold party vision spared her until next week. David, the architect, was criticized for bad proportions with the swing jacket (middle), but his great skirt saved him. Dan, the choreographer, lost because of his lackluster jacket. The judges said it was too boring simple and poorly made for a piece that starts off a line. Dan's line was dropped. 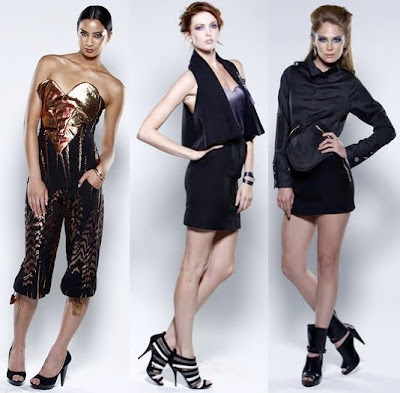 The Verdict: I got a little bored during the workroom section when the DSQUARED2 guys can in to critique progress, but that was probably my Tim Gunn bias showing up. It's always hard to meet so many new people, especially with the designers on top of the contestants. I'll be looking up everyone's name for a few weeks. The professional/designer dynamic is interesting. There were already fights. I wish the designers were ego-free and more keen to let their contestant run the show, but such tension makes good TV. I like that the contestants are creating a cohesive line. I hope the challenges don't get to crazy in a way that messes up anyone's vision. Also, it's great that the prize is a line launch for the contestants with a cash prize for the designer who helped them. So many Project Runway alums have failed to use the $100,000 is a way that actually launched their brand. It also seems like we might actually get to buy the winning looks too. Here's a video for a sneak peek if you haven't seen it yet:

If this gets another season, will they be considering fashion bloggers? (Although, I could never picture myself going on a reality show...... or being good at sewing and sketching.)

What did you think? Will you be watching more? Do you see any problems coming up? Did you agree with the winner and loser?
Photos Source: BravoTV.com
TV + Film

Robin said…
I was at a play last night and my mom called, leaving me a message that I should see this show. I'll be giving it a look next week, but don't hold high hopes it will rival my Project Runway.
December 3, 2009 at 3:09 PM

Jael Paris said…
So the contestants work with designers and many of them can't sew? What are they contributing?
December 5, 2009 at 11:23 AM

becca said…
The contestants are designing, planning, coming up with brand identity. The designers are really reduced to seamstresses and teachers.

I expect most of the contestants who can't sew will learn out of frustration with their designer.
December 5, 2009 at 1:10 PM

Anonymous said…
I thought the comments by the judges were mean spirited and lacked the sophistication of Project Runway.

There just seemed to be something missing. Project Runway was fun to get into right from the first episode. This series seems to be desperate for ratings, as if they are creating by contrivance the same effects that came naturally to PR.

I was rather annoyed by the whole thing. I doubt the magic can be duplicated. It does not have the same class as Bravo's other fashion series.
December 5, 2009 at 11:50 PM