Project Runway Episode 8: Be My Divorcee 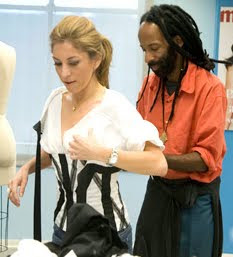 When I saw women walk onto the runway in wedding dresses I nearly squealed with joy. Finally, a challenge that stretched the designers! Most challenges this season have been too safe and boring. I was hoping the designers would have to restyle the wedding dresses, and we'd see some good "bridezilla" drama, but they were actually divorcees (Que Tim saying "I'm bringing in your divorcees"). The wedding dresses had to be torn apart and repurposed into dresses for their new single lives. The crappy material of the dresses added to the challenge.

I had to watch this week's episode late (sorry for the delay). When I was finally watched it tonight, I saw a promo that told me Nicolas was still in. That ruined my hopes for the episode before it began. After seeing Nicolas' look, which he admitted was the ugliest thing he's ever made, I'm angry he didn't go home. If Nina had been around questioning his taste level all this time, I'm sure we'd be seeing the last of him.

Carol Hannah just cannot catch a break. She is consistently good and consistently not allowed into the top three. Boo!

Just as a mention, I didn't care for Althea's look, but it may have been better than most of the pieces made for last week's "blue" Macy's challenge.

Irina's lacy cocktail dress, which was pretty, lacy and fairly basic, gained rave reviews from the judges. I thought it was nice, but not earth-shattering. I'll admit she is a good designer, but I just don't like her. I question her taste after seeing her design for Macy's last week. Plus, she's kind of annoying. I'm not sure why the judges love her so much.

Shirin didn't win the challenge, but she won the battle of the crazy client. Her divorcee wanted some crazy Cher costume with peacock feathers coming out of her butt. She also had the least amount of wedding dress fabric to work with. Shirin nearly caved, but with some advice and a hug from Tim, she created this cute, sporty number that had her client looking hot rather than like a hot mess. During judging, Shirin's client actually said she wanted this dress to be shorter (and she clearly can't stand properly in this length)! 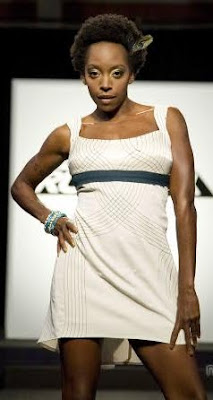 Gordana won. I never saw that coming, but her dress was super cute. She dyed the material, and created a sassy, edgy look. The topic of divorce, something she had experienced, brought on so pretty strong emotions that made her miss her family terribly. She couldn't get a hold of anyone and ended up crying into her husband's voicemail. I'm glad the episode ended well for her. She needed a pick-me-up.

Christopher was in the bottom three again. I'm getting worried about him. This is the second week in a row where he thought his look was awesome, but it ended up being awful. This doesn't bode well for him as the competition gets harder. I hope the Christopher we saw at the beginning comes back. Michael Kors hated his dress and said, "she just looks like tin foil." He also said "metallic garbage bag." He's safe this week. I hope he comes through next time.

Logan lost it this week (mentally not as in getting kicked out). He again crumbled under the pressure of his client (just like the models-as-clients challenge). His outfit was hideous. Heidi thought it was Oktoberfest gone wrong. I like Logan so I'm glad he didn't go home, but I think he probably should have. His outfit was the worst this week. I feel like the producers kept him in because he's so well liked, but this was bad.

Poor Epperson is out. He's never been a favorite of mine, but he has done some good work. He was such a good sport about leaving too, which made it all the more heartbreaking. His outfit wasn't good at all, but I don't think it was bad enough for elimination. Heidi really had Oktoberfest on the brain because she brought it up with this look too. I think the judge who said "wench" was more accurate. I don't understand why he didn't grasp the concept of the challenge at first (or really at all), but he certainly suffered major consequences for misunderstanding. Good luck out there Epperson! I'm sure you're career will be a good one.

What did you think of the winner and loser from last night? Who are your favorite remaining designers? Next week...Nina is back!
Photo Source: myLifetime.com
Project Runway TV + Film

Rachel said…
There were some really bad looks this week. Apparently none of the designers can make decent trousers. I agree that Logan's was the worst look- really hideous and badly made. And that Gordana's was the best- I was happy for her win.

I think at this point it'll be kind of sad when any of them go home... except for Nicholas and Irina. I inexplicably don't like Irina either.

I am getting worried about Christopher!! I would normally pick him as my favorite but he keeps disappointing. And usually Althea too, but I didn't like her dress at all this week. Tough! At least Carol Hannah is consistently good.
October 10, 2009 at 10:19 AM

I can't believe Epperson went- I guess it doesn't say much about me, but I thought his look was the best, not the worst. My boyfriend I were both sure he was going to WIN, actually. Yeesh. Christopher is really the only designer left that I like now that Ra'mon and Epperson are gone. I'm glad Nina is coming back. I've never before had to consistently watch the people I think suck advance while my favorites are eliminated.