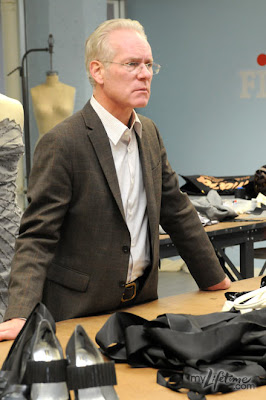 Sorry about posting this a little late today, but I kept falling asleep from boredom. This season is draining me. Last night's episode was titled "Best of the Best." Really? This is the best the best have to offer. When doesn't the next season start? Even Tim Gunn looks ready for a new group of designers and rightly concerned about this bunch.

The designers started facing away from the runway only to turn around to see each of their winning looks. Well, Logan hasn't won so he saw his look from the first episode, which the judges decided was the best he had offered all season. They were told to make a companion look for their winning look on a $100 budget. Where did all the crazy materials challenges go this season? Did they choose boring challenges because they knew they had a mostly (Ra'mon excluded) boring group of designers?

Tim Gunn is scoring a lot of screen time this season. This is partly because the model choosing portion has moved to it's own show and mostly because these designers need some extra coaching. I've never seen Tim so forthcoming with specific advise and outright help. He actually told Carol Hannah how to layer her fabrics. I get the feeling Tim Gunn is the only reason Lifetime bothered airing this season aside from advertising obligations.

With only six designers left and one challenge before Bryant Park, all of the designers were judged. I'll start with Carol Hannah. Tim not only helped her layer her fabric but also gave her a major pep talk at Mood. She felt she need to show the judges she could make pants, but Tim told her to stay in her comfort zone and make it amazing. She made it cute, but amazing was a long way away. Her dress with pockets was a companion piece to her Bob Mackie look (left). I could see them in the same collection, but she had so many other directions to take that. The judges loved it though. Heidi even said, "We could all wear that dress." (Really Heidi, even guest judge and season two alum, Nick Verreos?) I would wear it, but it's not what I would design to wow the judges at this stage. 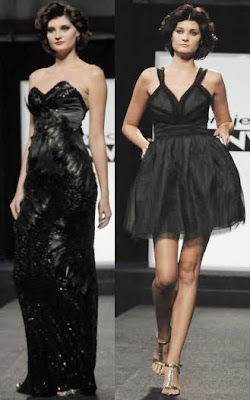 Irina was also liked by the judges, but she was still bitter. Her companion look for last week's Aspen-inspired outfit(left) looked lux and comfortable. I loved the sweater coat, but didn't find it all that interesting. I'm with Nina that the brocade mini dress underneath looked cheap. Nina also stirred controversy asking who came up with the sweater coat idea since both Irina and Althea showed cozy sweater coats. Irina lashed out at Althea on the runway, but guest judge Nick defused it saying those things happen. Plus, the sweater coat was not invented yesterday. 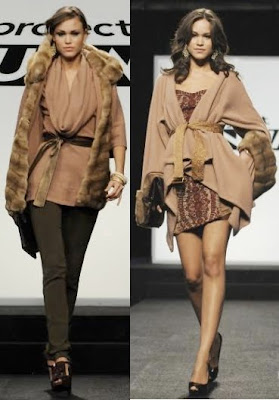 Althea's sweater coat may have been controversial, but there was no controversy about her paper bag waist pants. They echoed her winning look (left) perfectly. They flattered the figure, which is very tricky with that style, and everything looked easy, lux, and expensive. This combination secured Althea last night's win and eternal evil glares from Irina. 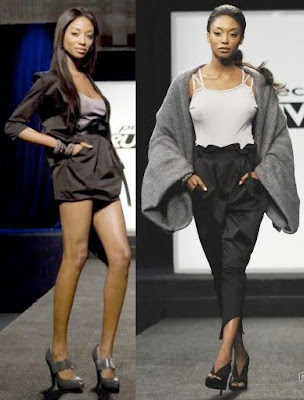 On to the worst of the "best." Christopher landed in the bottom three, of course. I'm over my original love for him. He was the best of the three worst, which says something considering this messy, awkward dress that does nothing to capture the edgy youthfulness of his winning red carpet look (left) from episode one. Nina cringed when it came down the runway. Nick said it had potential (how positive of him), but it needed major editing. I think it looked like his film genre dress minus the pretty parts. Without consistent judges, this kind of self-copying has gone unnoticed all season. 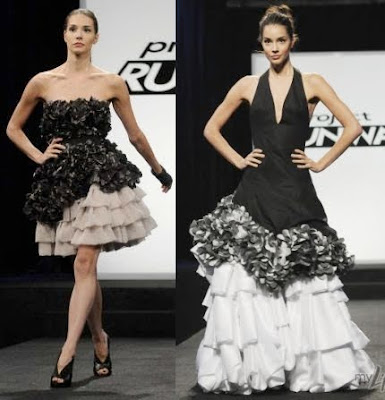 Gordana made a boring, dated jacket and something else as a companion to her look from the divorcee challenge (left). This completely missed the mark. I expected Nina to question her taste level and send her packing, but she remained safe. 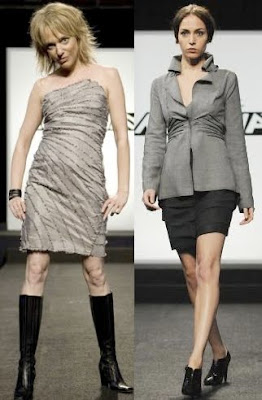 Even his "good" looks and silver pants couldn't save Logan. He didn't even have a winning look to build off of, which should have been the first clue that this week wouldn't go well for him. Again the judges urged editing (We have a theme!). The look had a lot going on and little going for it. The look he had to work with was a blank slate. He could have done anything. The judges have been wanting him to step up his looks, but this was too much. I thought Logan had some promise, but he never lived up to it. The saddest part of his leaving is that my favorite model, Kohji (right), also got eliminated. Logan left saying he isn't a designer for "middle American or 90% of the country." I guess he designs for the 10% of the country with a lot of money and no taste. Unless he books Paris Hilton as a client, his career will be a short one. 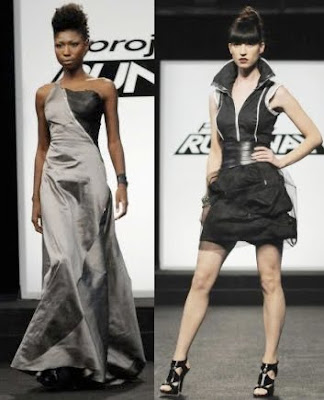 Looking ahead, I fully expect Carol Hannah, Althea and Irina to be at Bryant Park. I don't know if Gordana or Christopher will join them. I'd be more interested to see Christopher's collection, but I don't know if he can pull off another week. At least his winning look was cute. I didn't care for Gordana's winning look much at all. I really hate to say it, but all things point to Irina winning the season. If she does win, someone should have tried to edit in a few clips that made her seem endearing or even mildly likable. I'm cheering for Althea. Actually, I'm cheering for next season.

What are your thoughts on the season so far? Who do you think will win? Irina's clothes are pretty good so why is it so hard to get behind her?
Project Runway TV + Film

Len said…
you are so right that this season is dragging so long and boring... ugh, did we run out of good designers in this country??

i reluctantly agree that irina shows the most talent but shows such an ugly personality. but the fact that they showcase that alludes to her eventual defeat... their formula is pretty predictable. irina doesn't bother me so much though... there have been bigger arrogant jerks on project runway without half the talent--: kenley (hated her!), wendy pepper, jefferey sebeelia (ok, he was kinda good), etc.
October 31, 2009 at 3:58 AM

Jael Paris said…
Not a designer for middle America? As a resident of the Midwest, I'd rather a designer figure out who his audience is instead of issuing a blanket statement rejecting customers based on region.
October 31, 2009 at 9:38 AM

Unknown said…
Oh- you are so right on...I was just telling my husband last night what a boring group this had turned out to be. They seem to only design in grey and black- not that I don't love those colors, but not all the time. Also, I think the judges may have been sipping some champagne last night before they came out to judge. They were really having some fun with some not so fun looks. I do think Carol Hanna has some real talent though...and I am ready to see some pants.
October 31, 2009 at 11:38 AM

Robin said…
I always feel like your posts perfectly vent my own frustrations. I fell asleep during this episode too! Never happened before. I've also given up on my dream of Ra'mon coming back. Anyone else peeved to see Michael not judging again last night?

I am really bored of all these designers. Althea and Carol Hannah are okay. I think Irina will win too, which is too bad because what a mega-crappy attitude. I can't stand her. I thought it was classy that Althea didn't mention the copying issue, even when Irina did.

I loved Logan saying he was kicked off for being too out there. like he was some rebel they couldn't wrap their minds around. Does he watch Project Runway? Actually, they said it was mostly because his stuff looked amateur- a point that I totally agree with.

Christopher and Gordana need to go home. They've been boring me for weeks (though they're both kinda sweet). I remember the good old PR of yesteryear, when we would get to this point and I'd be nervous because I loved all the designers so much!
October 31, 2009 at 11:52 AM

Rachel said…
Agreed agreed agreed. I'm not as bored with it as you are, but that's probably because I've never been able to watch a whole season before so I don't have much to compare it to. I was actually surprised Gordana didn't go home, but that's ok because Logan needed to go home too. I'm so disappointed in Christopher... he showed so much promise at the beginning but has been SO BAD since then. I'm rooting for Althea, but I like Carol Hannah too. Stinkin' Irina is really talented though. Oh, and I'm bummed Koji went home too!!
October 31, 2009 at 2:30 PM

Jessica said…
Oh BOY! I think I agree with you on almost EVERY WORD! The reason I really don't like Irina is for a couple of reasons. #1 she's a boring person #2 she doesn't really have much competition to push her. Her stuff looks decent because the other things are AWFUL. I look forward to reading more of your posts.

And on a side note... I like it when you post late. I don't get a chance to watch it until Saturday and otherwise I have to not look at it to ruin it!