Project Runway Episode 6: Where My Judges At? 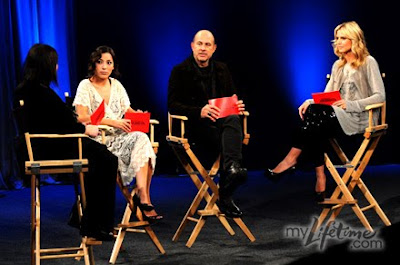 It was a sad night on the runway last night. Still no Michael Kors or Nina Garcia. (Although, it look like at least Michael Kors will be back next week!). One of my favorites went home. And the one I kind of hoped would be gone, won and has been granted immunity for next week.

At least the challenge was entertaining. The designers were tasked with choosing a film genre and making an look for it that would still showcase their point of view as a designer. Lots of room for creativity. I was a little surprised no one wanted Western and Action & Adventure (I was a little surprised Carol Hannah's A&A look didn't make top three. This girl can't get a break). went first. (Had I ended up with Western as my genre, I would have gone space western and designed something inspired by the cast of Firefly/Serenity--Zoe, Kaylee, Inara! Where to begin?). It was a little unclear what the judges really wanted though. Usually they hate anything "too costume-y," but last night it seemed costumes were in order. (We need Nina and Michael back. They would have had a clearer vision).

Christopher remains among my favorites. I really liked his dress this week. It was lovely. Although, he shied away from claiming it was from any era, which I can't believe he got away with because he was supposed to make a period piece. But it's OK. I still love Christopher. It seems the judges love him too because they let it slide and put him in the top three again. (Next week's preview shows him crying. Oh no! Don't cry! And don't you dare get eliminated!)

Epperson got stuck with Western. It was all that was left so he had no choice. However, he made a lovely look. Had the "too costume-y" rule been in place for someone else's look, this look would have won. The denim dress with ruffles was modern and fun. The holster for her gun was awesome. (Want!) And it was a great look. However...

Nicolas won. His creation was not only a great sci-fi costume, but he created great a "ice queen" look with the make-up. It was a costume though. Michael and Nina would have pointed that out. The judges said it looked cheap in person but would look fab on screen. Epperson's looked great on and off screen. Yes, this had drama. Yes, Nicolas focused and made something worth considering this week (although he took no break from competing with Irina for the title of "Queen B"). Yes, he found a challenge that actually fit is obsession with white, shiny, lacy things. I just don't think it needed to earn him a win when Epperson made something that could be both costume and clothing without looking cheap in person. (I do think Nicolas earned his spot in the top three though).

Gordana landed in the bottom three. Her flapper dress was really well made, but it was not original. I think her lack of creativity is really going to catch up with her soon if she doesn't step it up. She is a great dressmaker, but I'm not sure she is a great designer.

Louise landed in the bottom two for her first ever appearance among the six that get judged. Her "film noir" flapper look fell flat. It really lacked creativity. With Louise's super focused personal style, I was shocked she did so poorly with this challenge. When the judges complained about her lack of vision I was sure it was the end of her. Yet again, however...

Ra'mon is out. How sad is that? Yes, his garment was bad. Yes, it wasn't well made. But it did have vision. It did take risks. He has really done well in the past. This is a guy who consistently finds his way into the six that get judged by taking risks and having a clear vision. When Michael and Nina are around, this kind of vision usually saves a designer and they send the boring one home. I need my judges back so I understand what's going on.

I'm happy to we'll get to see more from Louise because I do like her, but I don't like her nearly as much as Ra'mon. The runway will not be the same without you buddy.

P.S. During Models of the Runway, all the designers had to switch models. Expect drama about that next week.
Photo Source: myLifetime.com
Project Runway TV + Film

kylsie said…
My jaw completely dropped when Ra'mon went home. I had him pegged as final three for the entire contest, if not the winner. Totally stunned and upset, as he was my favorite.

I have no idea what the judging criteria are at this point. After watching season after season of Project Runway, I think I have a feel for the things they reward- risks, creativity, having been consistent (Ra’mon Ra’mon Ra’mon). Also, he’s won at least one challenge and I don’t think he’s been in the bottom yet? He takes one risk, it doesn’t quite work and he gets eliminated? What is going on here? I'm pretty upset by how odd this season is.

Christopher and Emmerson are strong, but I’m not in love with a lot of the designers. I can’t believe they’re throwing someone so strong away and pushing through people who have been ‘eh’ or worse. I was annoyed that Bowl Cut won. Looking forward to his imminent elimination.
September 25, 2009 at 1:43 PM

Rachel said…
I would have chosen Epperson as the winner (WOW) and Louise as the loser. Not that I dislike her... I just really didn't like her dress and I like Ra'mon better in general. I also thought of Zoe when I saw Epperson's dress- I think it was the belt :)