By becca - September 14, 2009
This year the VMA's not only graced us with several spectacular performance (and several lame ones, but at least they weren't all lame), but it also brought of plenty of scandal (we're booing you Kanye!).

The red carpet brought a bit of scandal too, when both Pink and Shakira wore the same dress. It's an awesome dress, perfect for the VMAs. It's also a great choice for Pink. Had Shakira not worn it tighter with awesome boots, Pink would have had a runaway win with this looks. However, Shakira out-shined her. This dress is from the current Balmain line so it's possible one of them just bought it off the rack, but there is a chance someone at Balmain messed up allowing both singers to have the same dress. The collection has several other VMA-worthy pieces too. 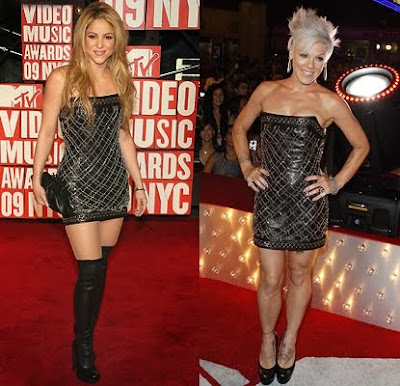 Oh, Lady Gaga. Jael and I would title our relationship with the Lady Ga "it's complicated" on Facebook. On one hand, she's a good pop star. On the other hand, she thinks she's a groundbreaking artist. On another hand (we have four hands between us), she has the guts to wear some crazy-awesome clothing. On the fourth hand, she's always blathering on about how avant garde she is when she is often just crazy for crazy's sake. After seeing her VMA red carpet look and her awesome performance, we've decided we love her as long as she agrees to keep her mouth shut from now on. Also, she brought Kermit the Frog as her date, how can you not love that? (P.S. We still hate her song "Just Dance.") 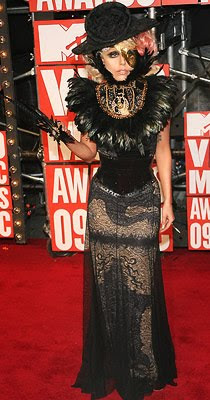 Beyonce. First, we love what a classy lady you are. You stepped aside to let Taylor Swift have her time in the spotlight during your acceptance speech time after Kayne West ruined her moment supposedly on your behalf. However, we wish you'd find some classier clothes to match your awesomeness. This looks like a shirt. It's not a bad shirt, but you could have done much, much better (like, for instance, with pants). Actually, you could have worn this. 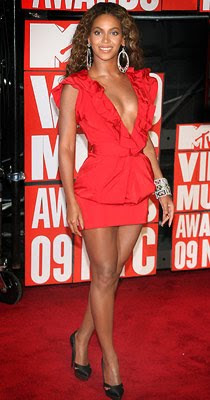 Katy Perry here looks like the sole survivor of an awards show. She has fought her way through the vicious red carpet hordes, struggled through crushing crowds to present an award for best acceptance speech brawl, performed "I Will Survive" while being chased by mace-wielding disco queens and still come out alive. After all that I guess the dress isn't completely terrifying...maybe. (Katy, do not take this as a suggestion to perform "I Will Survive" because you would ruin the song.) 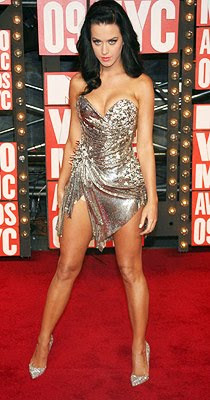 J.Lo this look is not worthy of you. It looks like something Mariah Carey would wear on an "I feel fat" day. You can do better than that. You look lovely in pale gold tones, but this is metallic taupe. You appear to have shiny arm flab, and I know you don't have arm flab. 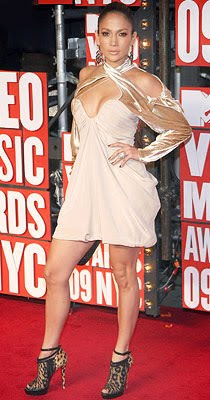 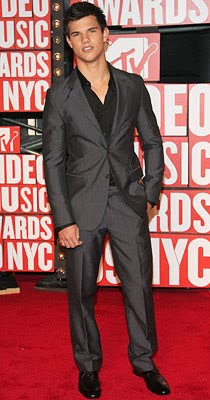 Also, Kristen Stewart, your hair is much better. Thank you.

And now for the Idiot of the Evening (this is a tough title to win at an MTV event) and his date. Kayne, you lose. Amber Rose, unless you are actually nude and happen to posses snake skin instead of human skin, there is no excuse for this . Also, why does Kanye have a booze bottle on the red carpet? Does he think he's Kid Rock now? As a Detroiter, I take offense to that. Also, bad hair. 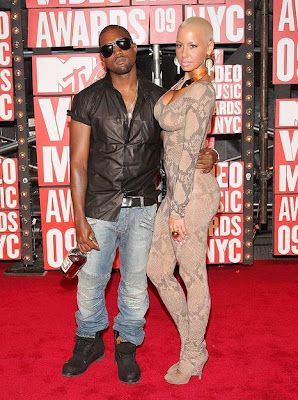 What are your thoughts on the VMA red carpet?
celebrities designer TV + Film

How Amy and Amber lost 80 lbs and their virginity! said…
kanye was so rude. i think you were being polite when you dubbed him the "idiot" of the night. his arm 'candy' looked more like arm 'meatloaf'. her outfit was horrendous! shakira is gorgeous and i love her. i hear she is only 5'1", is this true? if so, that is how tall my blogmate, Wolf Blitzen, is.
you should follow us! we love hearing fashion updates!