By becca - September 21, 2009
For general thoughts on the Emmy red carpet, check out Jael's post from this morning. Last week, Jael proposed her daring red carpet picks for several Emmy nominees. Let's see how those ladies' real choices matched up to Jael's picks. 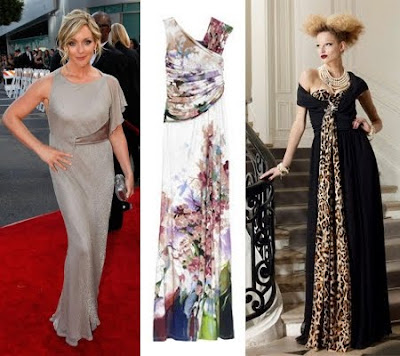 Jane Krakowski of 30 Rock tends to play it safe on the Red Carpet lately and last night was no different. Jael had suggested she try color or prints like those in the pictured dresses to make her old-Hollywood-glamor style more noticeable. However, "Jenna" once again when for something forgettable. I don't even thinks it's most flattering dress either. I'm bored. Tell us what you think in the poll below.
poll by twiigs.com 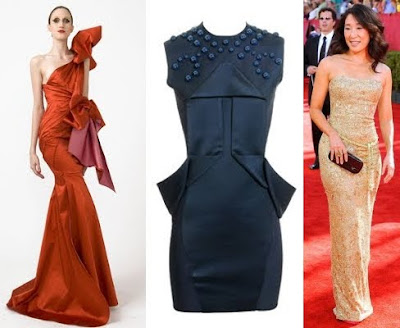 Sandra Oh is one awesome lady (I always feel like her last name should end in an exclamation point "Oh!" Anyway...). She also likes to take risks so Jael made some risky yet fabulous suggestions for her. Any adventurous pick is sure to attract critics, but what fun is playing it safe? It's no fun. However, that's what Lady Oh(!) did with this gold column dress. She looked lovely, but it was not a memorable look. Do you think she rocked the simple dress enough to make up for playing it safe? Or do you miss the risks?
poll by twiigs.com 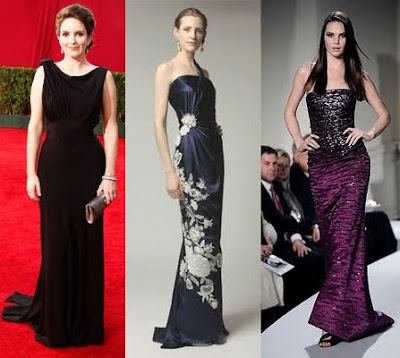 Tina Fey, 30 Rock's leading lady, tends to stay with basic black on the red carpet. While there is nothing wrong with that, it'd be nice to see such a colorful comedienne try a little color and pizazz in her wardrobe. Jael suggested this bold navy dress with embroidery or this purple striped number for our favorite writer/actor/totally-awesome-person. Tina stuck with her basic black and looked pretty but also pretty much the same as she always does. What did you think? Cast your vote.
poll by twiigs.com 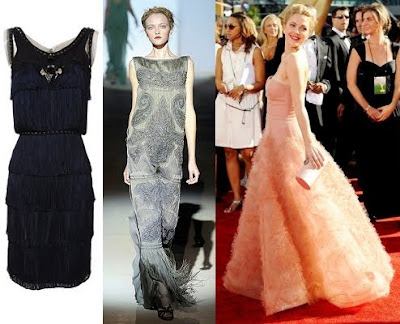 Based on her Grey Garden's press tour outfits, Jael said she expected Drew Barrymore to show up in something "one part retro and three parts brave." Instead, Drew chose something all parts princess. She looked lovely and never gave up her adorable smile the entire evening. While I really like Jael's edgier picks, I can't help loving a women in her 30s who pulls off princess so well. (This is probably because it gave me Ever After flashbacks, and I loved that movie when I was younger). How do you feel about her princess dress?
poll by twiigs.com 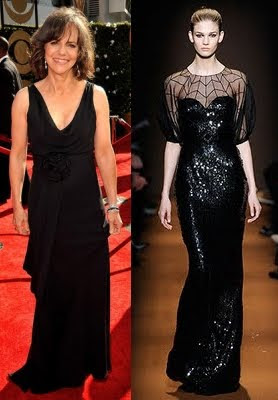 Sally Field has an eternal cuteness about her, which is why Jael thought she could pull off the dramatic spider web dress. Instead Sally stayed safe with a standby black, draped dress. I think she could have done better. Your thoughts?
poll by twiigs.com 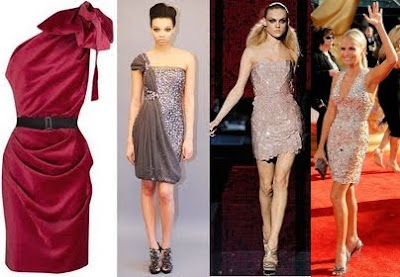 Kristin Chenoweth won for Pushing Daisies! She also took Jael's advice and wore something short and sassy in a subdued color (but with tons of sparkle!). What do you think of her red carpet look?
poll by twiigs.com
P.S. Dear ABC: Did you notice that Pushing Daisies won 4 (FOUR!) Emmys? Did you also notice that the only weekly TV show with more Emmys was 30 Rock? Do you now realize what a grave and gross mistake you made in canceling the pie maker and friends? Do you also realize that the Emmy count for Pushing Daises only made everyone remember what you did and renewed the public's intense disdain for your network and its horrible decisions? You do? Just checking.

P.P.S. I actually send the above note to ABC, not that they read my notes...clearly.
celebrities TV + Film

kylsie said…
I was bummed to see that Kristin Chenoweth was super tan, super bleached blonde and had those big french manicured nails. I realize she's probably always been that way and I've been obvlivious... just hate to see the girl I love as Glinda look so Hollywood and Paris Hilton.
September 22, 2009 at 10:37 AM

Kschenke said…
I think the Kristin Chenoweth dress would have worked if it had been full-length. She has the body to pull off just a flashy dress, but it would have been just a little more formal and classy if it was longer.
September 27, 2009 at 10:31 PM