By Jael Paris - September 18, 2009
Jane Krakowski, aka Jenna from 30 Rock, is a prime candidate for Dress The Nominee. If she's not mismanaging her breasts on the red carpet, she's relying on unmemorable old Hollywood glam looks. Year after year, I forget she was even there, let alone what she wore. Step one of breaking this cycle is exploring color again. Why not try this beautiful silk floral gown by Just Cavalli? It's fresh and young, great for a chesty woman, and it will stand out. She could also play with the animal print trend with this gown from Christian Dior's resort show. She can still do old Hollywood hair and makeup (avoid wearing gobs of jewelry like the model) but she won't blend in. 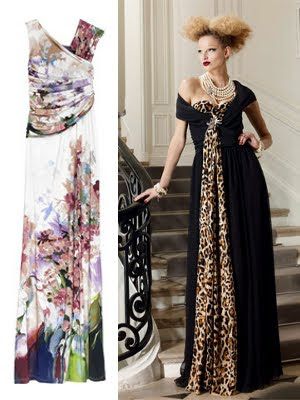 We love Tina Fey. She took a big style step at the Golden Globes and wore a sternum baring dress. I still stand by the dresses I picked out for her then, but this year would like to see her take another fashion adventure: color. Navy is a safe color, and the white embroidery on Naeem Khan's gown make it a show stopper. Oscar de la Renta made this purple, vaguely striped gown with Tina in mind. I'm completely making that up, but it would still look amazing on her. 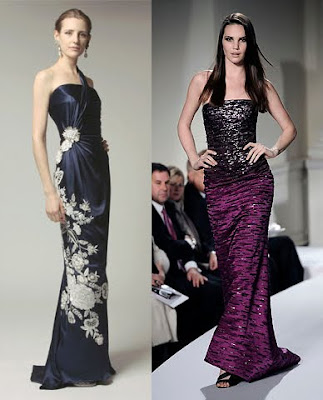 The facts were these: Kristin Chenoweth was nominated for playing Olive Snook in Pushing Daisies. ABC canceled this show, one of the best on television. I'm still comforting myself with pie, honey and spontaneous musicals. (Talking corpses are not so comforting.) Since she's sort and sassy, I'd like to see her in something similar. She always wore bright colors on the show, so for the red carpet she should stick to something in a more subdued pallet. This asymmetrical velvet dress in wine by La Petite S***** is equal parts fun and sophisticated. Just lose the belt. For a nuetral sparkle, she should look into Naeem Khan's organza overlay sequin number or Versace's pailette mini. Just add red lips for instant fab. Sandra Oh takes red carpet risks and we love her for it. Unfortunately, her risks tend to land her on the worst dressed lists year after year. When I saw this Zac Posen dress from his resort show, I wanted to see someone daring bring it to the red carpet. Match made in heaven? If she wants something less dramatic but still distinctly amazing, this beaded oragami cocktail dress by Emilio De Morena is an excellent choice. 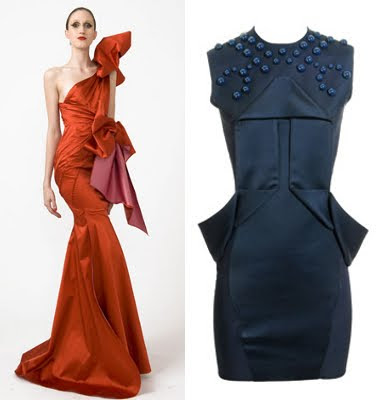 I've never seen Brothers and Sisters, but Sally Field looks so much like my mother, I wanted to put her in this post. Women her age generally want to cover their upper arms, and this sequin number from Andrew Gn does that while still looking sexy. (Plus it's not like Sally Field has the personality to really support "Spiderwoman" comments.)

Drew Barrymore's Grey Gardens press tour was a buffet of hits and misses. Since her nomination is for playing Little Edie, I suspect she'll show up in something one part retro and three parts brave. I was going to suggest a dress from Alexander McQueen's resort collection, but she just wore that with bad hair. This navy fringe cocktail dress from Lanvin walks the line between restrained and costume, but my personal vote is for this long gown by Albeta Ferretti. For either dress, she just needs finger waves, smoked eyes, a pink lip and antique diamond earrings. 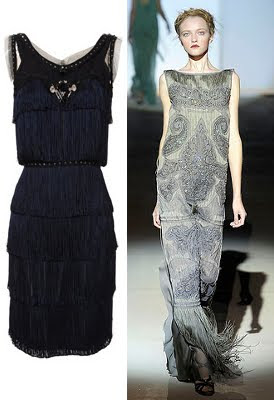