Project Runway is Back! 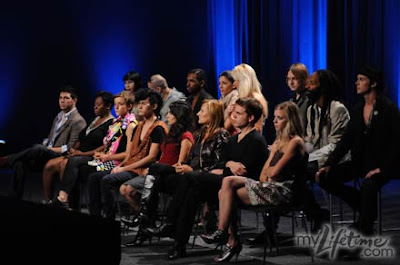 Project Runway is finally back on TV. It's made the leap from Bravo to Lifetime. After the disappointment that was Bravo's The Fashion Show, I'm so happy to see Heidi and Tim back in action with a whole new set of designers.

My worries that Lifetime would ruin Project Runway are so far unfounded. (Well, Lindsay Lohan was a guest judge, which didn't please me. However, she actually did a pretty good job). Aside from moving the show to LA, which doesn't make sense because New York City is far more fashionable, Lifetime has let the show continue as it was. Also, it seems they've moved the boring model selection segment to its own show called Models of the Runway. More on that in a later post.

The new crop of designers look good. The first challenge was rather typical--make a red carpet look. But it let us get to know the designers' sense of style before making them fashion day-to-night looks out of recycled cell phones or something.

What did you think of the premier?

Here is a look at last night's best and worst:
The Good
Ra'mon-Lawrence Coleman: This gown for the Oscars was well-liked by the judges. It's full of Hollywood glamor. The Judges only criticism was that it was a little safe and told him to take it to the next level.

Johnny Sakalis: The judged called Johnny's look seductive and easy to wear. They loved the low back, but said the bright red color was a little off. Johnny is a recovered meth addict who had major panic attacks trying to create this look. Perhaps it was the fault of the video editors, but he came off over dramatic and annoying. He got so much screen time I thought he was the one going home before I saw his design. I actually didn't think this deserved to be among the best looks. I liked Louise's look and Irina's look better. It almost seems that the producers had the judges recognize him because of all the drama he created. I'm glad he's recovered from his addiction, but I hope we don't revisit this story line every week.

Christopher Straub: Christopher was lovable from the beginning. He creates very pretty clothing and has no formal fashion education. He may not know what smocking is, but his look for the VMA's red carpet was called hip and young by the judges. Michael Kors liked that it managed to be both cute and edgy. This self-taught designer won the first challenge and has immunity for next week.

The Bad
Qristyl Frazier: The judges loved the back of Qristyl's Red Carpet look, but hated the front. They questioned her taste, but spared her from elimination.

Mitchell Hall: Mitchell seems like a bit of a whiner. In past seasons designer have been sent home for not being able to figure out how to dress a slightly-larger-than-they-expected model. Michell complained the the measurements he was given were wrong and he had to remake the dress in 30 minutes. However, this is the "make-it-work" part of the show. He didn't make it work. I was surprised he didn't go home since he sent is model down the runway basically naked under this sheer disaster.

The Ugly
Ari Fish: "She looks like a disco soccer ball," quipped the always quote-worthy Micheal Kors. Ari was season six's resident space cadet, but the judges decided not to keep her around for entertainment value. The lack of any that looked ready for the red carpet or ready to wear in this century meant Ari was out.

Read about the other designers and see all the episode one designs on Lifetime's website.

kylsie said…
Oh, so much to say. We here in KC were very excited to watch Ari progress through the show, and are now quite sad. I was especially interested to see her designs when I realized she is completely insane. I felt like Mr. Naked Dress was a worse offender with his whiny and his ugly weird creation. Ah well.

I also agree on Mr. Meth. He was annoying the crap out of me.

I'm glad that the shows feels the same. I barely noticed the channel switch at all. Though I share your feelings on the Lohan.
August 21, 2009 at 2:44 PM

Kschenke said…
The one thing I have to say about the dress that won is that it seems too bulky. It looks like it's adding 10 pounds to that girl (which I realize SHE probably needs, but what would it do to anyone over size 0?). And I had a feeling that the girl who didn't sketch her design was going to go home. It wasn't a good sign.