By becca - February 09, 2009
Just like with the Golden Globes, Jael Paris picked out dresses that would be great choices for the Grammy nominees. Unfortunately Beyonce, Pink and Rihanna didn't show so we can't compare their dresses to see how they did. We still have M.I.A., Katy Perry and Leona Lewis though. Speaking of Leona, we noticed a battle of the gold gowns between her and Carrie Underwood. And what do you think of Paula Abdul's look? 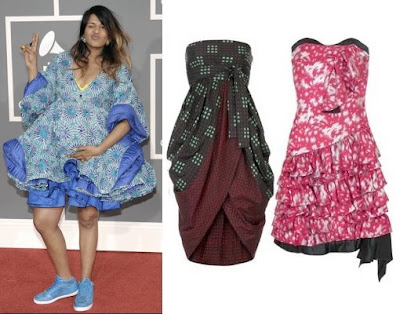 After M.I.A. performed last night, it was announced that she was not only nine months pregnant, but performing on her DUE DATE. So I feel like maybe we should cut her some slack. I doubt I would want to appear anywhere other than the hospital if I had been in her position. However, the dress she chose has an awful lot of fabric so I feel either of these maternity friendly pieces would have been better.
poll by twiigs.com 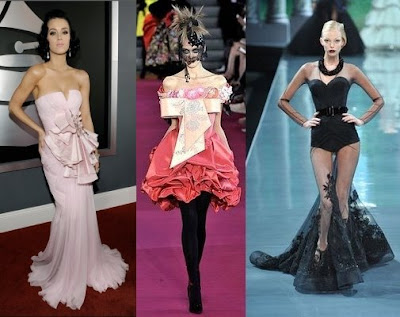 Katy Perry threw me off by showing up in a soft pink gown. Where's the bedazzled vintage swimsuit? (It showed up in her performance, in case you were wondering). I'm almost disappointed by how normal her choice was. The crazy is more fun. Although, I may regret saying that.
poll by twiigs.com 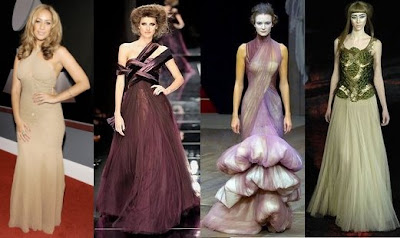 Leona Lewis is stunning. She looks great in gold, but I would have loved to see her in these slightly bolder choices. The woman can wear color and pull off a lot of dress so she should take advantage of that.
poll by twiigs.com 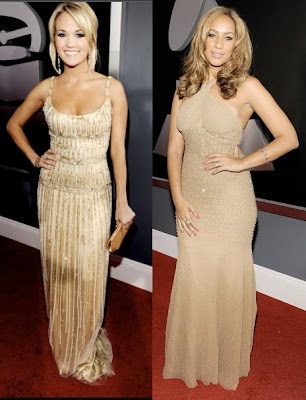 Carrie Underwood thought gold would be a good choice just like Leona. The dresses have very different styles, and both have these stars shining. But who wore it better?
poll by twiigs.com

Paula Abdul usually looks a little crazy--probably because she seems to be a little crazy. Her dress, however, has potential. I don't know if she is quite pulling it off. Maybe it would work better on someone else.
poll by twiigs.com
celebrities

Jael Paris said…
When I first saw Leona Lewis, I thought she was Mariah Carey. That is not a complement.

Paula's dress would look great on a fashion darling like Cate Blanchett or Gwenyth Paltrow. I think some of its craziness is being magnified by the woman wearing it.

Why did Beyonce not show up? She goes wherever there are pretty dresses and cameras.
February 9, 2009 at 6:15 PM