By Jael Paris - February 02, 2009
Unlike the Golden Globes, the Grammy Awards are usually packed with sartorial personality. Few of the nominees would walk the carpet in a typical gown, but just in case, here are some suggestions to shake things up.

Last year I hoped that someone would wear Zac Posen's blue feather cocktail gown and Rihanna delivered. She is the one celebrity I can count on to take fashion risks. Since 2008's superstar singer clearly reads Fashion Me Fabulous for advice on what to wear, I found three edgy dresses she could pull off. Karl Lagerfeld's mini dress is a mash of trends -- black, sheer, ruffles and belts. Just be sure to do the flash bulb test before venturing in front of the cameras. No one will make wedding comments if Rihanna wears this white dress from Givenchy couture. I love the thick embroidery like expensive curtains (and no, I don't think it's a bad thing to have your dress compared to curtains). Likewise, Gareth Pugh's pleated leather mini is not for the blushing bride. It may be too informal for the red carpet, but it would be a fabulous performance dress. 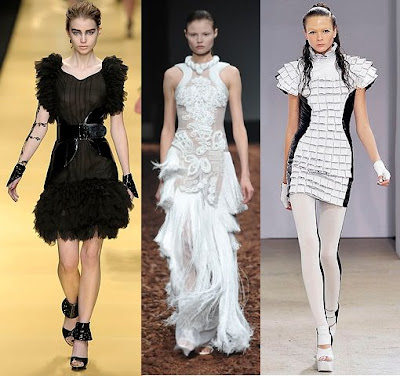 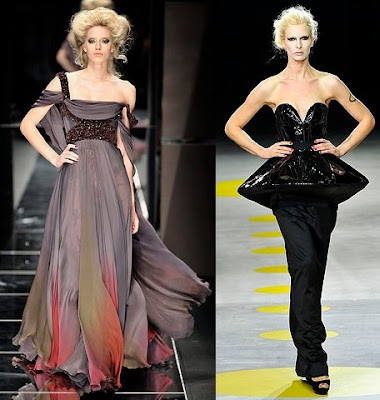 Pink can be hit or miss on the red carpet. I like what she'd been wearing lately as it fits her body, but others frequently put her on the worst dressed list. I'd either love to see her slip into something short and circus-themed, like this Miu Miu bloomers ensemble from SS08, or be rockstar dark in Alexander McQueen's ombre fringe dress and a studded waist belt. 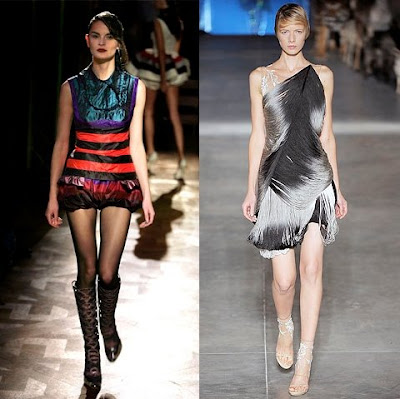 M.I.A. is known for wearing bright colors and a clash of patterns. She has enough calm confidence to completely rock looks that would normally make me twitch. I could easily see her in this cocktail dress by fellow Brit Jonathan Saunders. If her pregnancy is starting to show, she might consider this bustier plaid number from Alexander McQueen's McQ line. She could also pull some strings and have her friend Marc Jacobs create a variation on this homage to prom 1992. Pile on fat Mr. T chains and bright heels for her perfect red carpet appearance. 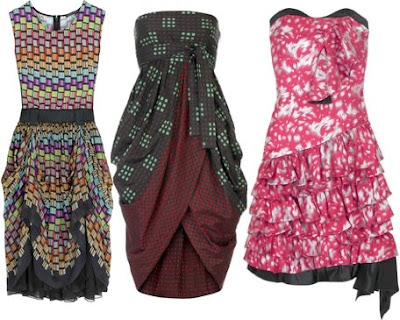 Katy Perry could save herself a few hundred dollars by wearing a sandwich board powered with neon lights blaring "LOOK AT ME", but I suppose she'll want to wear clothes. Who makes sequin retro onesies? Behold some alternatives. Christian LaCroix's couture puff of ribbon, rhinestones and flowers would be a perfect concoction of over-the-top girly. If Perry insists on her onesies, she can wear them in a more adult way with this black sheer gown from Christian Dior's couture collection. 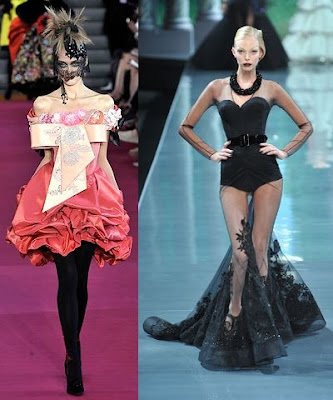 I don't know anything about Leona Lewis, but I love her voice. Maybe because she's such a traditional wailer, I can't imagine her an anything other than a classic, romantic dress like this Eli Saab. Fortunately, McQueen also does soft and romantic, but he always has a twist somewhere. This lilac cloud hem dress from his Spring/Summer 2007 collection would be lovely, but I'd really love to see her in the green feathered gown from his Fall/Winter 2007 show. 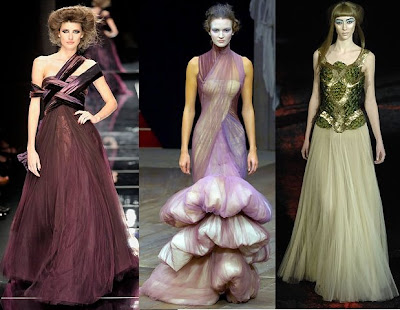