My Name Is Rachel, And I Am a Hat-aholic

By Jael Paris - January 14, 2009
Months ago, I wrote about the dress that sparked my interest in fashion, and asked you to send in your own clothing stories. My darling roomie came through with her love affair for a certain accessory.

Hello. My name is Rachel, and I am a hat-aholic.

The first hat I remember was from being a flower girl for my aunt and uncle's wedding. It was a lacy confection, topped with a pink ribbon. Gloriously 80's.

Some years later I bought my next hat from Hudson's Department Store for $10, a fortune for a ten-year-old, but every hat lover must have a beret, and the splurge was worth every penny. Nearly 15 years later, it is still my favorite. 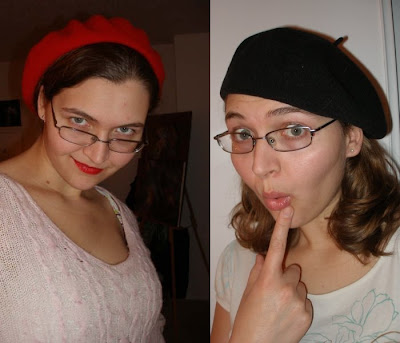 My next hat of significance was a reversible bucket hat that I bought in middle school. It worked wonders when I wanted to hide myself from the world. In high school, I was too concerned with fitting in to want to wear hats very much. None of the popular girls liked hats, and goodness knows, if they didn't like them, why should I?

Freshman year of college, I was blessed to have Jael Paris, hat lover among other things, as a roommate. My beret got dusted off and resurrected as part of my winter wardrobe. 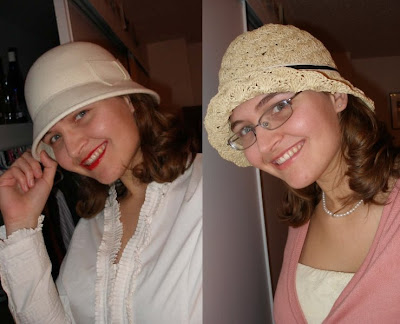 It was also around this time that I purchased a green corduroy not-quite-baseball cap. That summer, I went to Montana where I got a part time job with my dad's boss weeding the massive garden, and needed a hat to keep my poor nose from burning to a crisp in the intense Montana sun.

The summer between my junior and senior year, I went to Japan to study abroad. Japan is a fantastic, hat loving nation. In fact, not wearing hats when outdoors is considered unusual. I bought a cute polka-dot cap while I was there. 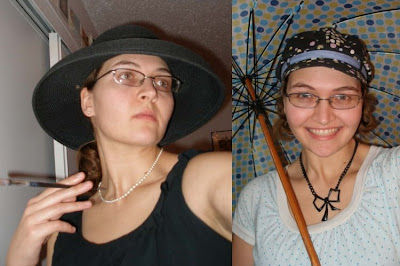 My senior year of college brought many hats. I bought a red beret, a straw cloche hat, and a green felt cloche (that was eaten by an ambitious dog a few months after purchase. The dog fared much better than its intended meal.) I even got a floppy velvet thing with a feather in the brim, perfect for renaissance festivals.

After that, I bought a black, blue and white London Fog fedora on super clearance at Macy's. It was mostly on a whim, but when a wool hat is only $6, and the phrase, "I don't have a fedora yet," floated into my head, there really was no choice in the matter.

The next hat took a lot of stalking. I saw it at World Market this last summer and immediately thought, Audrey Hepburn! But it was $30. And it was made of recycled paper. $30 for recycled paper far exceeds my allotted hat budget. Balmy June was promising to turn into toasty July, and then my hat went on sale, 50% off.

My most recent hat is a white wool cloche from Target that I bought as a replacement for the green cloche that got eaten. Not quite as fabulous as its predecessor, but with a fun pin, it works well. Now if I could justify $30 for that lovely black bowler hat that I've been ogling...

If you want to share a story about a piece of fashion that means something to you, email us at fashionmefabulous at gmail dot com. (Don't worry about your spelling and grammar. becca's mucked through my pre-coffee posts and made them sparkle.) Don't forget lots of pictures!
Accessories style

Anonymous said…
I, too, am obsessed with hats.

Rachel said…
I heart [the other] Rachel! Fantastic pictures... and hats :)