By becca - August 21, 2014
Week three brings a look back and ahead. To celebrate 20 years of Marie Claire, the designers were challenged to predict what fashion would be doing 20 years from now. But first, we got to see what our judges and host were doing 20 years ago. Heidi was just starting out in modeling. Nina was running around getting coffee and belts at a fashion magazine. Tim was 12(!) years into his stint at Parsons. Zac was 14 and just started to get into fashion. (I was 9 and very concerned with the sorry state of clothes available to most of my dolls, Also, I really wanted this outfit for my American Girl doll, Samantha).
The future turns out to be a bit underwhelming according to most of the designers. Amanda had immunity after last week.  She wanted to follow up with some thing grand by taking risks. However, before declaring her safe the judges called her out on her rather disjointed look. To see hers and the rest of the safe designers' looks click through the slideshow below:

Emily created what she called an Ewok hoodie. I want it. WANT! (Sadly, the picture doesn't show it, but it's awesome) It has this powerful cocoon effect. I think the characters in the sci-fi novel I'm writing might wear stuff like this. The jumpsuit was cool too. It could almost be standard issue and accessories by the people on the space station. I like it. This was my second favorite look. It took third place. 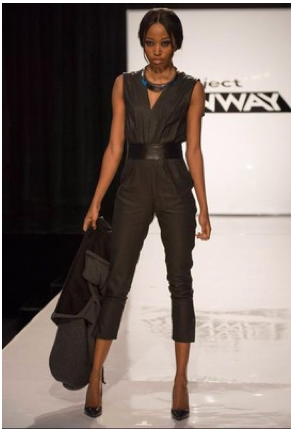 My favorite look took second place. Kristine has been pretty quiet so far, but I think she's one to watch for. She was very smart with the piece. The top is leather and the jacket is neoprene (again, not really in the picture) so neither had to be finished, which allowed her to get a crisp look on a one-day challenge. This set her apart from many of the struggling designers who had epic finishing problems. She gave her future girl a lot to work with by making layered separates out of very durable fabrics that could be remixed. She should have won (watch the episode if you haven't because this jacket is great). 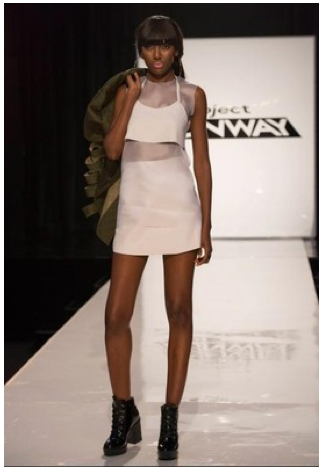 Like really. She should have won or Emily. Sandhya won. She created this retro-futuristic piece right out of the Jetsons. I love retro-futurism. I love the Jetsons. (Their doorbell is my text message alert tone).  I even appreciate that the judges acknowledged this very risky design choice. It's well executed and wonderfully crazy, but it crosses the line of cartoon-ish and costume-y. I was sad to see it beat out the other top two designers. 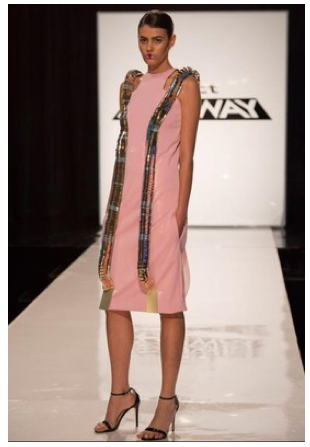 Sean really just failed to execute a mediocre idea. There isn't much more to it than that. His concept was safe and it work wasn't polished. I liked his unconventional look. I wish he would have channeled that energy. He deserved his spot in the bottom, but I'm glad he isn't going home yet. Alexander had what looked like a cool look, but trashed it when it didn't fit his model. I wish he would have found a way to use that top as a vest or something because the sad potato sack he sent down the runway was, well, sad. 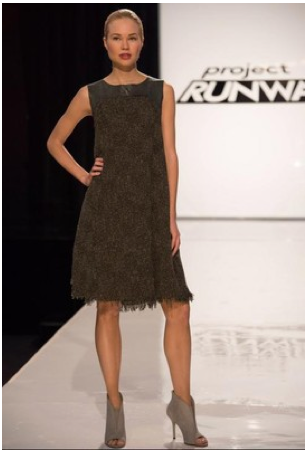 However, Alexander was saved by that fact that Angela was still on the show. Her mini-suit was the saddest of all. I hope women in the future won't be forced to wear mini skirts, old lady pink and jackets that need sleeves when they work on the space station stock exchange. This is not a power suit. This is not the kind of look that results from "leaning in." This is now the future I want to live in. The judges sent Angela home. This really isn't the place for her. She doesn't work quickly enough or loudly enough to get noticed in the fast paced world of reality TV. 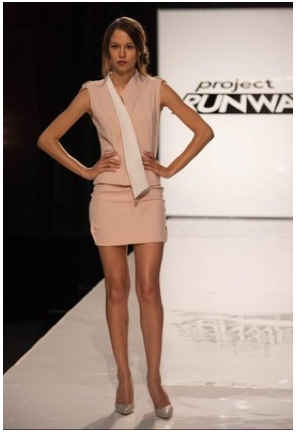 What do you think of the winner and loser of this challenge? Leave a comment telling us what you were doing 20 years ago and what you think fashion will be like 20 years from now. I'm hoping for a 3D printer that will print a new look for me every day, and I can recycle that material each night to be used for the next day's outfit. (No more laundry!--or limited laundry. I hate laundry.)
Project Runway