By becca - August 19, 2014
Apologies for the delay in recaps. I'm blaming the fact that my hometown was briefly underwater last week and we've been cleaning. OK, enough with the excuses. On to the Runway.

The usual thoughts:
For week two the designers headed to the movie where they picked up strange move-related materials. Overall, this was a pretty good week for the runway. Most of the designers really tried use the most unconventional materials in interesting ways. One new feature I like is showing a vote on who the designers think will win and go home. They predicted Fade would win and Angela would go home. They were wrong on both accounts. Heidi told Team Blue that Sean and Fade lost a chance to win because Angela's look wasn't up to snuff. (I hate team challenges). Team Purple (Mitchell, Char, Kini) and Team Green (Samantha, Emily, Alexander) were simply safe. Click through the slide show to view the safe looks:

Team Silver (Kristine, Amanda and Korina, pictured below in that order) were the winning team. They were cohesive and sharp. They used materials in interesting ways without be repetitive or showing the safe look three times. The designer who got the returning vote--Amanda--took home the prize. This is a pretty decent outcome though I would have still liked to see how Fade or Sean would have done against her look if things had been separate. 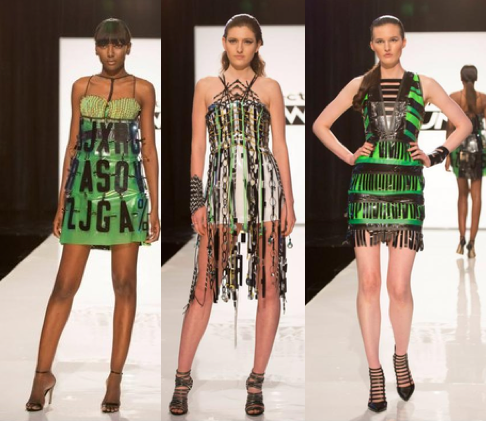 Team Red (Hernan, Sandhya and Carrie, pictured below in that order) were in the bottom. Really, Sandhya sabotaged here, which isn't cool because she had immunity. She wasn't going home, which is why I think there should be no immunity in team challenges. They ended up with three looks that were basically the same. Sandhya was the worst and should have gone home. Overall, they did not fit together. I would have liked to see Hernan go over Carrie. She was mostly trying to survive. Hernan was the mastermind and Sandhya was the problem. However, Carrie got sent home. I'm sad. I would have liked to see more of her. 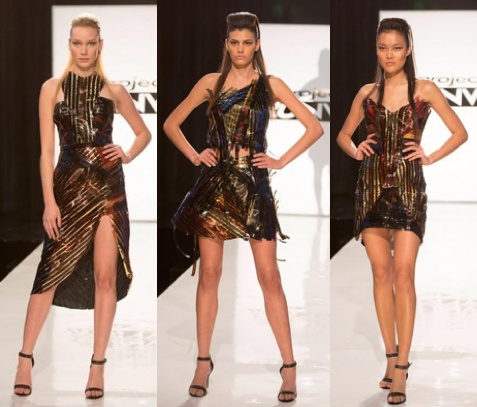 What did you think of this outcome? Who are you cheering for after this episode?
Project Runway