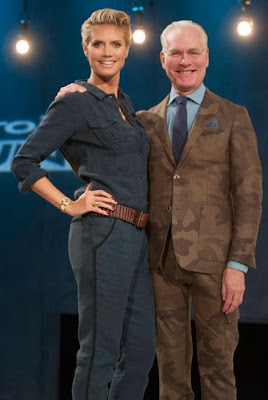 2. I'm not a fan of the word "Glamping" it sounds a bit ridiculous, but it I ever have to go camping again, please sign me up for this glamping. It looks fancy and less nature-y. 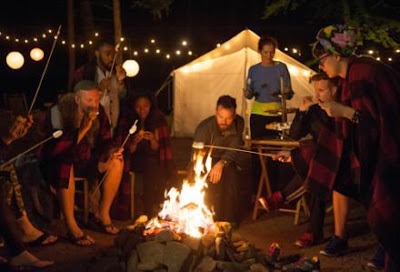 3. This week's episode was brought to us by bottled water. Nestle Resource water to be specific. I want to congratulate the ad sales people on their ability to make anything tie into Project Runway. That's some sales talent.

4. The designers had to make a look inspired by nature, but not for being in nature. I liked this challenge because it resulted in some lovely clothes. We also really focused on fashion in this episode. Even if you rarely watch the show, go on Lifetime's website and watch this one. It was a good one. And I liked that they gave the designers a little mini vacation. They needed it after all the drama so far.

5. Speaking of drama, this week had the least amount of it in the workroom. Maybe they should go Glamping more often.

6. I love that Heidi and Zac called the winning look poopy pants, but it was kind of a cool look. It stood out. It wasn't my favorite. I'm glad their picking risk takers for the win, but I'm still not sure about it. 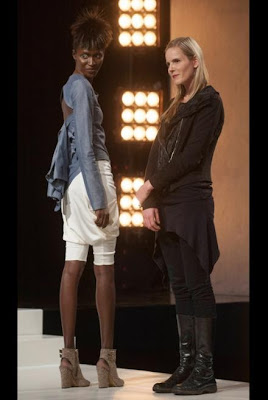 7. There were some really lovely safe looks this week. I loved Dom's reflections on water dress (left), Kate's was just fun (center) and I Miranda did something lovely with the simple green dress in a great shape with the leaves at the bottom (right). 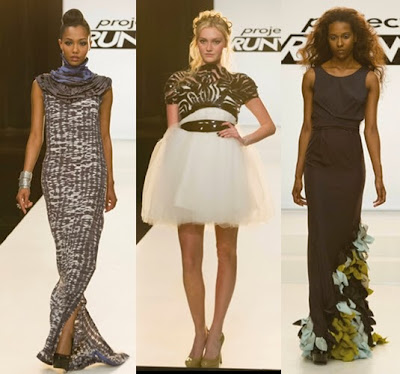 8. Jeremy's dress was my favorite of the top three (but not of the week. I'd go with one of the safe dresses above). He wrote a love letter on it that he penned during his camping trip. I like how it came together. 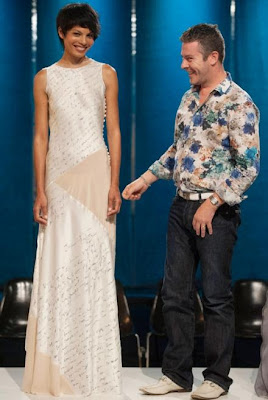 9. The bottom three were all deserving of going home, but I thought Karen was the worst offender even though she was not eliminated. It's just too dull and shapeless. There's no real design going on here. 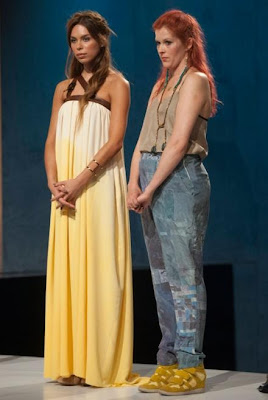 10. Ken is bothering me. His creations aren't winning me over either. He can go anytime. 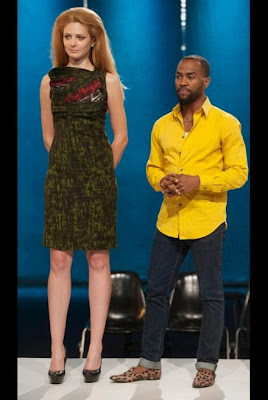 11. Justin was eliminated. His look was bad, but he at least tried something here, unlike Karen. It was off, and ill-concieved and just bad, but at least he tried to push himself so we wasn't just safe again. Even I can belt a sheet to a model like Karen did. 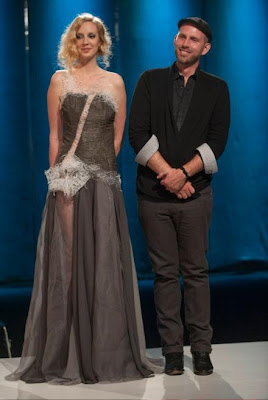 12. I knew the minute Justin was out that Tim Gunn was going to swoop in with his save. I think Justin could turn it around with more time. I don't think this look represents his work. I'm glad Tim did it. I just hope we won't be wishing he saved his save for later in the season. The save was really emotional because the other designers really love Justin. There was even group hugging. 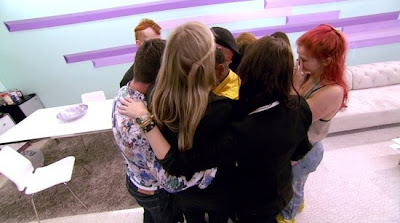 Rachel said…
I really liked both long white dresses, as well as Dom's dress. I was hoping one of those would win. The yellow belted sack dress was awful, if for no other reason than we've seen it a hundred times. I understand why Justin was eliminated, though. It was really touching seeing the other designers' reaction to Justin's elimination, and I wasn't surprised or disappointed at Tim Gunn's save.