By becca - March 23, 2013
This week a witnessed the Lord & Taylor challenge. The designers each had to create a look for Lord & Taylor. The winner get's it sold. Pretty basic stuff. Honestly, I don't know why they stuck with the "team" thing for this challenge. The teams were meant to be like little critique groups but only functioned to foster drama. In fact, the teams really didn't play much of a role in the judging either.
Stanley (left) and Patricia (right) were on the only safe team this week. They had an awful lot of drama while creating their looks. Stanley went way too controlling and Patricia responded by not responding. Both looks were fine, but not great. They deserved to be safe. 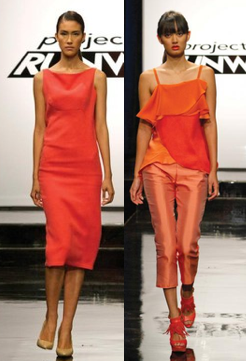 Michelle (left) and Daniel (right) landed in the top. Honestly, Daniel's poorly made boring dress should have dragged Michelle down enough to stick her with safe and elevate our boring buddies above to winning status, but Lord & Taylor wants to make money so the judges pretended Daniel's look was just fine so that Michelle could win. And she deserved to win. Her dress was wonderful, and is in fact already sold out. She was the only one who ventured away from pink/orange/red tones her fellow designers chose. Her bright dress stood out in all the right ways. 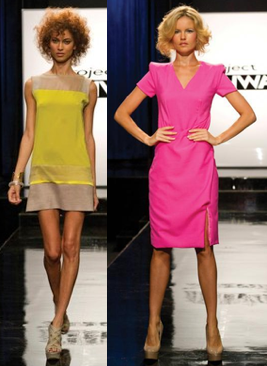 Layana (left), Richard (center) and Samantha (right) landed in the bottom. The judges all said Layana's mix of hard and soft was lovely, but the print wasn't right. I agree. She quickly went to safety. Richard and Samantha faced elimination. Richard was awful during the whole challenge. His dress was boring, safe and not that well made. Samantha's dress wasn't great, but I liked that she took a risk. She put a lot of work in and tried to make something innovative. Richard, however, just pouted. I was extremely mad when Richard was safe and Samantha was sent home. 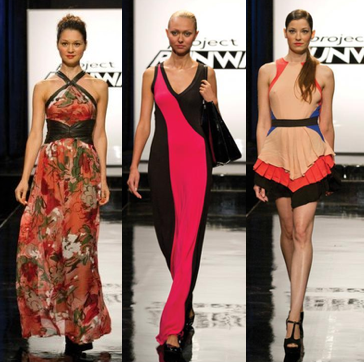 If there hadn't been teams this week, here is what I would have expected as the line-up:
Top three: Patricia, Layana & Michelle
Safe: Stanley
Bottom Three: Richard, Samantha, Daniel

Richard needs to go. I'm actually sick of Daniel and Stanley now too. I sort of expect either Daniel or Stanley earning spot at fashion week, but I could also see Michelle, Layana and Patricia sweeping for the ladies. (Will we have a girls vs. boys challenge next week?) I'm certainly cheering for Michelle. Who are your top three? Who do you want to see win?
Project Runway

Sarah O. said…
I was cheering for Samantha before she got the boot :-(