Project Runway S11E8: What Not To Wear

By becca - March 16, 2013
I'm not even sure how to write about this episode. I'm with Heidi when she said she wanted to wrap early and eliminate everyone. Nothing looked good. In fact, it was so bad I couldn't keep from laughing as they came down the runway. The judges were even having a hard time. The clothes were the worst I've ever seen on the show.

I have several problems with the challenge itself:
In a Project Runway first, there was no winner. There was, however, a less losing team, Team 50 Shades of Grey. None of the looks were any good. I don't feel a need to discuss them individually. 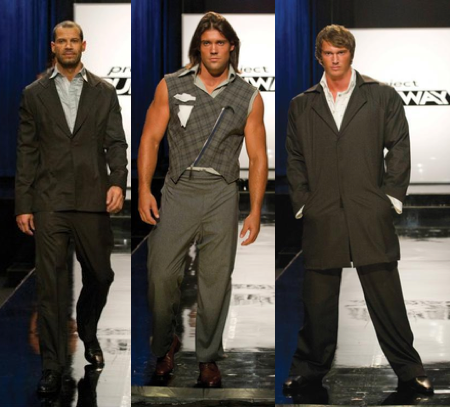 The losing team was Team Slick and Hip (which is almost worse than Team 50 Shades of Grey, almost). Samantha made the look on the left, except for the shirt, which Richard made. Her look was almost serviceable, and she was the first to safety. Layana tried to make a jacket in the center, but had no idea how to make menswear. It looked like a ladies jacket and a very funny fit on the big muscle-y guy wearing it. Richard made all the shirts, and he made them terribly. For a designer, it's astonishing that he hasn't even paid attention to how his own clothes are made. 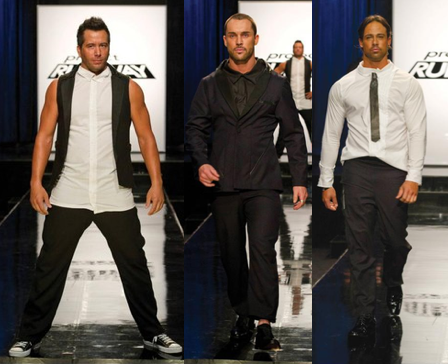 It was Amanda who went home. She made pants from the same pattern that she created for Samantha to use, and they wouldn't stay closed (which gave Nina the giggles). She'd been in the bottom enough. I would have actually liked to see Richard go. He lied about helping Layana, made a ton of excuses and was useless to his team. I think Amanda did better than he did. I wish the judges got to watch some of the workroom footage for eliminations.

What did you think of the challenge and the of the clothes? Do you think Amanda deserved to go home?
Project Runway

Cait Throop said…
I've seen enough of Richard and yes that was the most ridiculous episode yet. Totally irrelevant.
March 16, 2013 at 11:38 AM

lisacng said…
I was totally laughing seeing the clothes come down the runway too! I agree with Nina that on top of bad construction, there was no creativity! Richard is just a baby, making excuses and not helping his team because they shot-down his awful ideas. I don't think Amanda shoulda went home (even tho she's annoying). I agree, this challenge shoulda definitely been at least 2 days.
March 18, 2013 at 10:33 AM