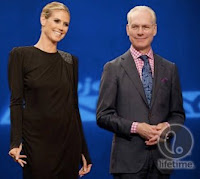 Project Runway season 11 has begun with a twist. This is the teams season. My first reaction to this news of teams was one of horror and disgust. I hate team challenges. They usually involve far too much interpersonal drama and screaming. I don't like screaming. However, the great and wonderful Tim Gunn keeps saying this is his favorite season ever. After all, fashion is something you have to do with a team, and working with others to execute a creative vision is a skill every designer should probably have. After one episode, I'm still not ready to declare the teams idea a success, but it wasn't as bad as I thought it would be. In fact, I even see some benefits.

How it works:
There are two teams, the Dream Team and Team Keeping It Real.  The designers were all given a challenge. Each team was given a slightly different take on that challenge--the Dream Team was to find inspiration in NYC from the rooftop of the Atlas while Team Keeping It Real was to find inspiration in NYC from an offshore boat. Despite being in teams, they didn't have to design together or even with each other in mind. They were free to make their own designs. As long as this continues for the most part, they challenges won't feel like team challenge. The winning team will contain the winner of the challenge and the losing team will contain the loser. This means it's vital to make sure none of your teammates have a train wreck on their hands because being in the top team guarantees your safety. This made many of the designers help generously behave more kindly toward their teammates. 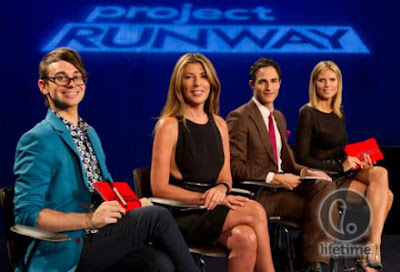 Teams might also get interesting if the losing team loses out the next week too. For example, they get less money because they have fewer people. Or in true team challenges maybe they will have to make as many looks as the team with more members. I'm curious to see how it all plays out and when the teams will eventually break down because we can only have one winner.

The two teams functioned very differently. Team 1, also know as Team Keeping It Real, worked together very well. They seemed to bond quickly and helped each other honestly through the project. The Dream Team worked alone only coming together when required or during crisis. When Tim came to mentor, it was done as a team session, much like I imagine peer critiques were done in school. I could instantly see why Tim liked this. He thrived in a teaching session where peers were helpfully giving critiques. When it was every designer for his or herself, these sessions couldn't happen. Now the designer have to voice concerns and give helpful tips to survive.


Winning Team: Team Keeping It Real
Patricia is an odd one. She tends to be a little bit off the wall both with behavior and design concept. Everyone seemed to think she was crazy at first. However, her idea to pant and layer fabric with peek-a-boo slits really worked and landed her in the top three. The judges loved that she brought movement to a shape that didn't typically have much movement. Also, no matter how bonkers she comes across, this lady seems to really know her stuff about art, history and other designers. 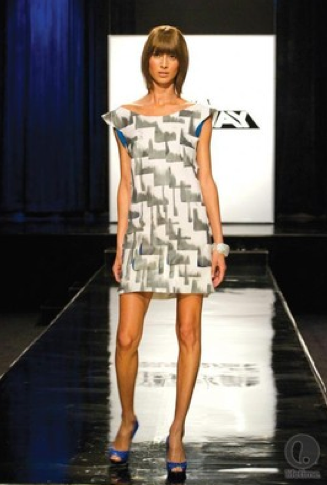 Richard talked like he was intimidated by the urban challenge being a free-spirited California guy, but he did a great job creating the kind of effortless feel a California designer would strive for while keeping it urban, chic and ready for any New York street. I really want this dress. I think it could look great in so many settings. Best of all, his team helped him. He was about to get all high-concept and over design when they stopped him and told him to keep the vibe he had going. 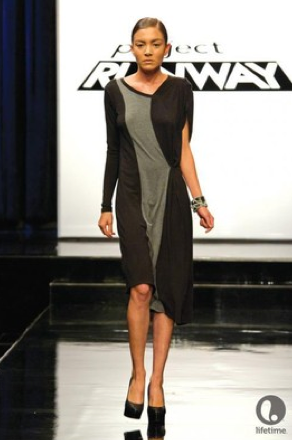 Daniel wins not only the first challenge but this season's award for instantaneous craftsmanship. They had a day to make this look. A day. Look at the suit he made in a day. Also, he doesn't know his model well yet, but the proportions were perfect on her. I'm not sure how he did it. The judges were extremely impressed and loved his architectural homage to the city. Even Nina loved the all black because that's how most New Yorkers dress. 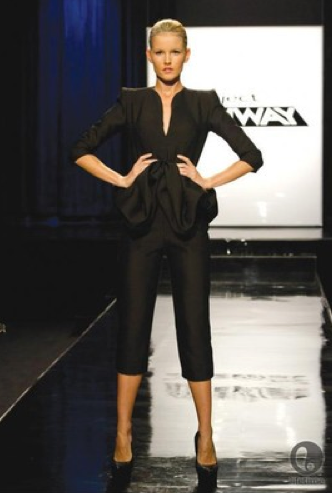 The Others
Team Keeping It Real had some low points but none as low as the Dream Team. Click through the slideshow below to see the other five looks in order from least to most appealing.

Project RUnway Season 11: Winning team others by fashionbeccafabulous on polyvore.com


Losing Team: The Dream Team
James created a basic pencil skirt and a billowy top. During critique his teammates and Tim said it just wasn't enough. They tried to tell him to do more, maybe go with a billowy top instead of a fitted one. He took their advice, but didn't go beyond basics. He also didn't make it well. The judges were disappointed and said they could get it from the mall. Heidi said it was boring and sad. 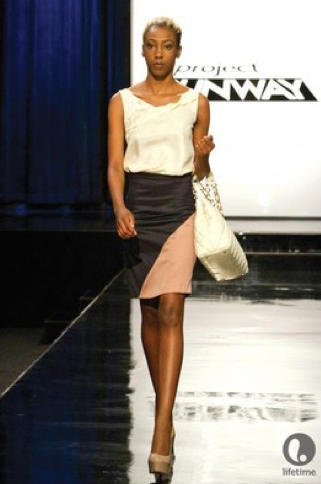 Cindy was going to create a knee length dress over a cigarette pant, which wasn't something her teammates could get behind. Instead of being super honest and tell her the whole idea was missing the point including her poorly mixed prints, they just said to make it a maxi dress. As a result she nearly went home. Zac Posen said they couldn't tell who she was with this. Guest judge, Christian Siriano (!) said at least her team saved her from adding another fabrication with the pant because then it would have been even worse. 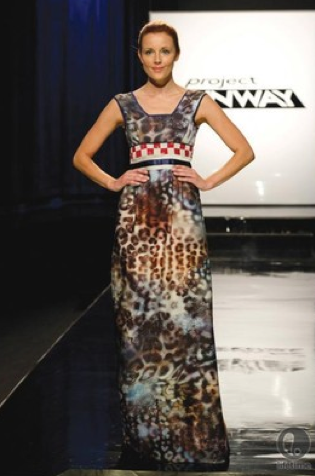 Emily fell apart. She could not get her look together and she couldn't seem to actually make anything. I'm not sure what she sent her time doing. Even when her team advised her to focus on the dress rather than the jacket, she just continued to not get anything done. In the end they tried to help her pull together what Nina said was the most unfinished garment she had never seen in eleven seasons. It was tied in a knot in the back and looked like a train wreck from every angle. Based on her portfolio, Emily is talented. It's a shame she froze and went home first. 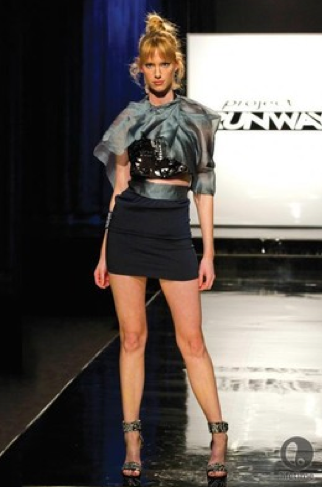 The Others
The other five designers were actually quite promises, but the lows were low enough to bring them down. Click through the slideshow to read my take on each one below. I've arranged them from most to least favorite.

Project Runway Season 11 Losing Team: Others by fashionbeccafabulous on polyvore.com


The New Judge: Zac Posen
Season eleven brings us a new regular judge. In stead of the quip-tastic Kors, we have Zac Posen. This is a big fashion name and quite a feather in PR's cap, but I miss Michael. The judging felt a little stilted, which I supposed could be fixed with time. Nina wasn't her usually catty self without Kors to cackle along with her. Christian Siriano was a good guest judges choice because it gave all the long time viewers a sense of security and familiarity in the face of epic changes. The season with rotating judges was hellish--lets hope at least a consitant judge helps keep horrors that bad away. And we all know American Idol fell apart when they messed with the judges. Let's hope Posen will be able to find a grove soon and Kors comes back to guest judges at least once. Also, Posen is being billed as a "featured judge" so he might only being filling in for this season. (Seasons 10 and 11 were filmed back to back, which is why I've been on a nonstop PR blogging blitz with those and all stars since July). Also, Kors is quipping online at Lifetime's site so we aren't totally without.


Your Reaction
OK, Runway fans give me your take. I'm dying to know your thoughts. Sound off in the comments and (if you like) let me know your answers to the following questions:

Rachel said…
-I'm feeling much better about the team thing after the first episode! There wasn't as much teaminess as there could have been since everyone got to make his own look. We'll see how it goes if/when they have to collaborate on looks.

-My favorite designers/looks were Daniel, Patricia, and Michelle.

-The one who was getting on my nerves is gone :) I was SO worried they would let her stay for some crazy reason.

-Zac is fine, he just didn't show much personality. I miss Michael.

Unknown said…
The team challenge thing is good. The least successful designers are those who can't edit or take suggestions. A lot of great design work is collaborative. The poor soul who went home first was a prime example of youthful hubris.

I think Zac is a good choice for judge, he seems calm and assured, though I do miss MK.

What was Heidi thinking with that ridiculous sheer top? She needs to be careful now that she's single - not to send a message of desperation. Yes, she can look fabulous in anything - but I thought that top was borderline trashy.
January 29, 2013 at 12:21 PM