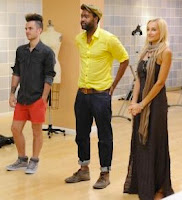 Season two of Project Runway All Stars has come to an end. It was a fun season, and I loved watching Uli and Anthony Ryan create at a level much higher than they had in their own seasons. This week's finale gave us the madness that was creating a collection in only four days. I have no idea how the designers did it. They were given some help from eliminated designers. Emilio received help from Althea. Uli picked Casanova as an assistant (which was entertaining). And Anthony Ryan sheepishly asked Joshua if he felt up to it. Joshua looked tired and defeated and he apologetically turned him down. Anthony Ryan looked disappointed but understanding so he picked Kayne. I was bummed that these two best friends wouldn't be working together, but from the interviews I've read, the designer were give 5 hours to sleep before being yanked back into production. Joshua had done an extra challenge (which makes Uli's work that much more impressive) and had the emotional strain of being eliminated right before the finale.


The Collections:
Emilio's collection was my least favorite. He did a good job. I'm still not a fan of how he uses color and I actually thought some of his pieces looked ill-fitting. I liked his polka dot work, but I don't know how it fit with the crazy print he also used. He certainly had a look going though, and he seemed to have a vision of who would buy these. (Because they were mostly separates, I could see the bold print working for statement pieces).


Uli's collection enchanted. She had the best styling, hair and makeup of any of the collections. The entire thing looked like the waredrobe of Jadis, the White Witch of Narnia. (Beware of accepting Turkish Delight from anyone wearing these clothes.) I loved every second of it. I'd been cheering for Anthony Ryan all season, but I would not have begrudged Uli a win with this collection. There were a few uses of faux fur that I didn't love, but aside from that everything was magnificent. She could actually add this collection on to everything she's made this season for one large, coherent collection.

Anthony Ryan could add this collection to his season's work too. He featured strong lines and bold colors. I loved his first look with the sheer panels under the arms. The details were astonishing given the four day time limit. I really liked everything he created, except for the finishing on the final piece. I did agree with Isaac during judging though that the varying lengths of the dresses were a bit confusing, but that is another time limit issue.

Anthony Ryan won! After a season of excellent work I was happy to see him take the prize. I do think he earned it. I would not have begrudged Uli the win at all. I do have a problem with Uli being second runner up though. This was clearly a race between Uli and Anthony Ryan. Even when the judges were talking, they seemed to think that Emilio had done well, but it came down to Uli and Anthony Ryan. Were they worried that putting her in the top two would cause a lot of backlash because it really could have gone either way? I don't know. But if Uli didn't win she should have taken first runner up.

Rachel said…
WOOHOO! I'm really happy Anthony Ryan won, but I agree that I would have been really happy for Uli too.

I agree with what you said about Emilio's collection. I thought it went Gypsy a few times too. Meh. My favorite thing he showed was the trench.

Uli's was totally magical. I was thinking Jadis the whole time too! Looooved the hair and makeup. The only thing I didn't like was the shrug thing in the second look. That crazy coat and her finale dress were my favorites.

Anthony Ryan's look was so cohesive that I almost wanted more variety, but each piece was so good. My favorite was the first dress and my least favorite was the finale dress (not even because of the finishing... I just didn't like it).

I really enjoyed this season (more fashion, less drama!) and look forward to future all-star seasons. My favorite challenge was probably the speed-challenge Uli and Joshua did, followed by the Christmas decoration challenge.
January 19, 2013 at 10:05 PM

Cait Throop said…
I loved Uli's work all the way through and her collection was amazing! Happy for Anthony Ryan, though, too!
January 20, 2013 at 7:32 PM