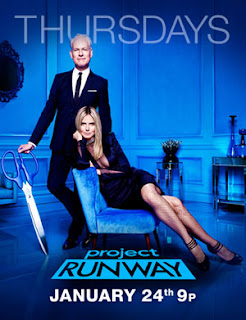 They come along several times a season. They bring too much drama and too many cat fights. They bring out the worst in everyone--including the judges and the viewers. They rarely produce great fashion. And we hate them. They're the team challenges.

It seems that Lifetime hopes we love to hate them--and that we love to hate them enough to watch an entire season of team challenges. Either that or Lifetime's research people never read any blogs, tweets or comments about their own shows so they are completely unaware of how much we dislike these challenges. I suppose they're hoping to blend Project Runway in with the rest of their screaming, meltdown-driven reality programing by putting these poor designers in a rage incubator sure to give us emotional explosions worthy of the worst Prom Queens. Perhaps we'll even have a challenge where we are forced to watch teams dress the Dance Moms after they've found out that none of their daughters gets to be the prima donna.

It's not clear if the designers will be in alternating teams or the same teams all season, but judging from the promo and this post on Lifetime's site, designers will still be expected to stand out as individuals on the runway. So, they will have to work together and compete against each other. Yeah, this should go well.

Also, the season will only feature Michael Kors during the finale. Either he was busy or doesn't feel like overdosing on Xanax just to get through the season. We'll be facing a season of drama with none of Kors witty quips. We will be gaining Zac Posen. I'm not sure how that will play out yet.

Is Lifetime daring us not to watch it? Is there any chance it will be good? Do you think they'll give us a regular season next year too or just another All Stars season? (Will we run out of All Stars soon and just have a "cast-offs" season?)

I'll be back tomorrow with my regular recap of the All Stars second season. Stay tuned, and sound off in the comments.
news Project Runway

Unknown said…
The concept of your blog is really very informative. I definitely share your views to my close friends keeps up the good work going.
dissertation help