By becca - December 28, 2012
This week the designers were taken to the Elie Tahari offices where they met the designer himself to receive their challenge. They had to create a read to wear look that would retail between $500 and $700. The winning look would be produced and sold in Elie Tahari stores and online. It's probably one of the best prizes of this All Star season so for.
Emilio found himself in between the bottom and top this week. While the judges considered him among the bottom three, they all agreed that he would not be going home. He made a "fine" dress, they said. They didn't love the color because it's very hard for a lot of people to wear. Emilio has been dipping back into his terrible color habits lately, which could really trip him up. Overall, the judges liked it, but it wasn't original or interesting enough. It was just a nice dress. 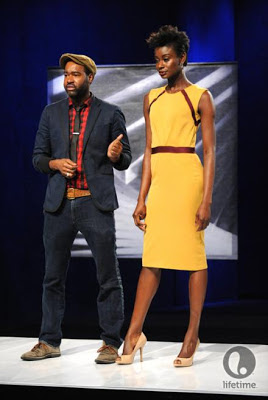 Joshua didn't do so well with the judges this week. His dress struggled in the fit department and the judges scolded him for using a beautiful fabric poorly. Elie Tahari said the model looked pregnant from the front. Georgina said the model's boobs looks liked they were down to her waist from the side. And Isaac didn't even want to talk about the zipper trouble Joshua was having on the back of the dress. Caroline also said the exposed zipper really cheapened the dress, which would be a problem for selling it in stores. 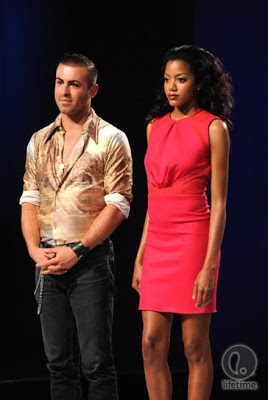 Ivy had the worst judging experience and went home this week. She originally came up with a good design concept, but she ditched it when she found this fabric. She didn't want to cut the fabric up so she made a maxi-ish dress. Elie and Joanna warned her in the workroom to fix the length so she cut the maxi dress to this weird above-the-shoe length. It looked terrible. When I was in junior high I remember these long tank dresses being in style. They had slits on the sides and you wore a little shrug with them. This is one of those dresses, and no one is going to buy that today, let alone pay $500 to $700 dollars for it. I think Ivy had used up her time in the competition and gone as far as she could. 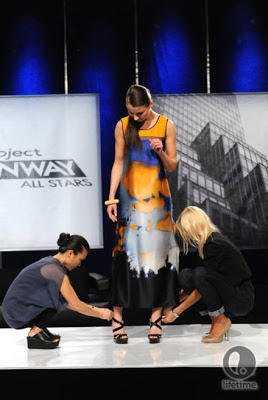 Uli originally lamented choosing all white for her dress because the other designers were working in prints and colors, but the judges loved it. In fact, Caroline said Uli could make a white dress every week and it would be incredible. Uli toned down her normal frills for this ready to wear challenge, but she didn't lose her flair. Georgina had a problem with the length, but Isaac liked it. He likened it to a great vintage find where the length might be a little off, but it totally works and you love having a different hemline from everyone else. Also, Uli may be the kindest designer to ever compete on Project Runway. I adore her personality. 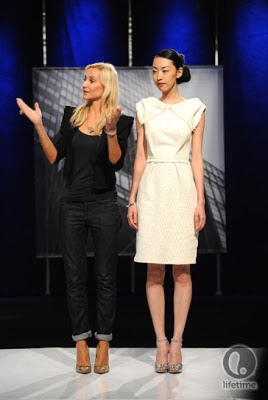 Anthony Ryan won! This is his fourth win this season. I sure hope he wins it all. His look was taken from a large panel of interesting print. Unlike Ivy, who became a slave to her large scale print, Anthony Ryan figured out how to take the parts of the large scale print that would serve him best and use them in such a way to frame the body well and make an interesting pieces that would still be produced affordably. Also, he gave us pockets. I love a pocket on a dress. I also love that Anthony Ryan keeps winning. 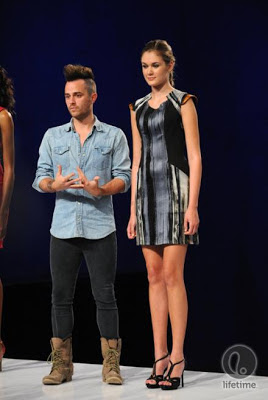 As we move into the final four, Anthony Ryan has four wins. Uli and Emilio both have two wins. And Joshua has no wins. It looks like our top three will be Anthony Ryan, Uli and Emilio, but Joshua still has a chance to squeak by. Of course, I might just think that because I like him better than Emilio. What do you think of this challenge? Who will be the top three? Who will win the season?
Project Runway

msc dissertation help said…
Appropriate a great way of Being Introduced to this topic Project Runway All Stars S2 E9: Ready, Set, Wear! material. It was great catching up is this? be grateful you gently for the conclusion,