By becca - December 22, 2012
Project Runway All Stars is finally at the point in the season where all of the designers get judged. Since all six designers would be on the runway, Caroline announced this would be a fashion face-off. Each of the designers were assigned one of three 1920s fashion themes. The designer who shared the same theme would face off so that one would be in the top and the other in the bottom. I don't really care for these types of challenges, because it usually results in a really good look ending up in the bottom while a mediocre one landed in the top. This one, however, worked out pretty well.

Emilio and Joshua - Afternoon Garden Party
Emilio and Joshua had the least fancy event and created the most middle of the road looks. The judges put Emilio in the top and Joshua in the bottom. It was a tough decision because they actually liked both pieces. I preferred Joshua's look. I thought it was the most versatile and wearable. Emilio's dress was pretty, but I wonder how it would look on anyone that isn't as statuesque as Emilio's model. In the end, both designers were safe. 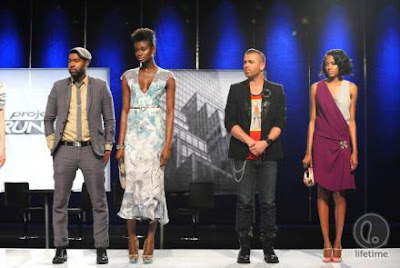 Anthony Ryan and Ivy - After Hours Speak Easy
I think this was by far the best category so it makes sense that it produced our winner, Anthony Ryan. Leading up to the challenge Ivy tried to trash talk and bring him down (which was a bummer because she's been so much nicer this season), but he wasn't shaken. He created a modern, flirty, flapper-inspired look with a killer feather capelet that mentor, Joanna Coles threatened to steal after the runway show. Ivy, however, relied too heavily on her expensive fabric and didn't make a very original look. I'm a little surprised that Ivy didn't get sent home, but I expect her to go home next week so I supposed it doesn't matter. Uli and Laura - Social Soiree
Uli is adorable, isn't she? Anthony Ryan remains my favorite, but I'm really cheering for her as well. Her look was fun and perfect for a 1920's social soiree without looking dated. Laura was perfectly awful to her during the challenge, but Uli never even blinked. She just kept designing. In the end Uli landed a top spot and Laura went home. I thought the judges were going to send Ivy home because she has a worse track record and Laura has had some wins, but he couldn't get beyond Laura's poor construction (Ivy might not have the best taste, but her construction is usually good). 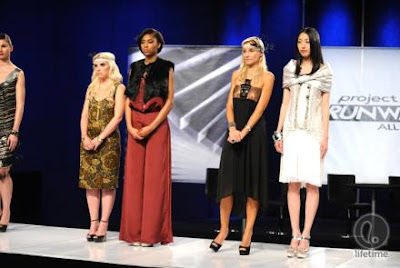 Click through the slideshow below to see front and back runway images of each look.

What did you think of this challenge? Who are you expecting to win? Do you think Joshua can knock Ivy and Emilio out for a top three spot because Anthony Ryan, Uli and Joshua would be my favorite top three?
Project Runway

Unknown said…
Of course it is a most important and suitable post!! i was study this article once and again. thanks a lot for your useful sharing.