By becca - December 14, 2012
This week the designer were introduced to an expensive watch designer who promised the winner a very expensive watch. But the challenge had nothing to do with time or watches or anything of the sort. This was actually the unconventional materials challenge, and they were taken to shop at a Christmas store. This has to be one of my favorite unconventional materials sources yet. I love Christmas, and I think all the shimmer and baubles are the perfect sources for some pretty fun looks. The only stipulation was that the looks could not have anything to do with Christmas.
Emilio was the only safe designer this week. He was probably thanking his lucky starts too because he dress was another not-so-great one. I don't know if any of you have ever seen those baskets made out of a paper bag, fabric and paper twist, but that's what this reminded me of. They were a nice enough craft in the 90s, but they are not high fashion. 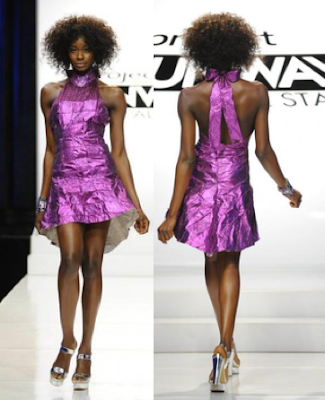 Top Three
Laura's modern dress was well-liked by the judges. However, they commented that the proportions weren't quite right and the dress somehow widened her model. 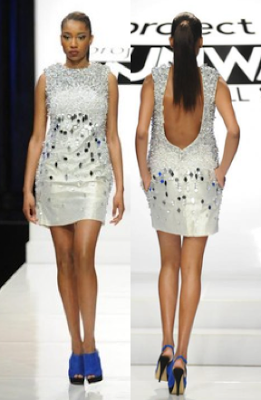 Anthony Ryan and Uli were close contenders for the winning slot. The judges thought Anthony Ryan's look had too many Christmas-y elements. I thought she looked like an ice queen. That was really their only compliant. Also, Anthony Ryan did beautiful work with the structure of the back of his dress. 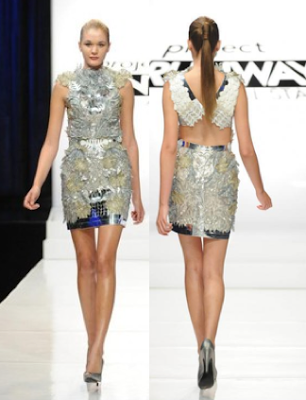 They loved the lightness of Uli's dress, but didn't like how the hem dipped in the back. They also didn't like the seams running down the middle of those sheer side panels. Both did an excellent job. I think Anthony Ryan's was my favorite, but I can't help but be happy to see Uli win. She did a wonderful job. 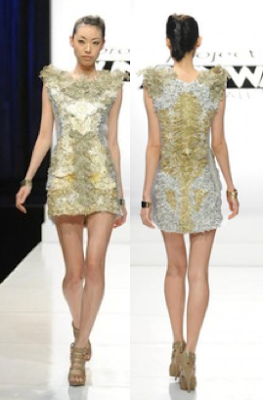 Bottom Three
Joshua might have scored a top spot had his bottoms followed suit with his top, which the judges loved. However, he had a total train wreck with those shorts. 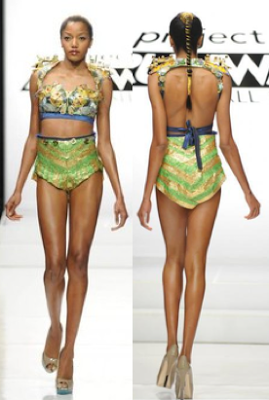 Ivy and Casanova have been working together all season. They work together in their off-screen lives and seem to be really good friends. I've never expect to see either of them in the top three at the end of the season, but it was sad for both of them to have to stand in the bottom two together. Ivy's dress was underwhelming, but it wasn't really all that bad. The proportions were off, and the look was rather safe. 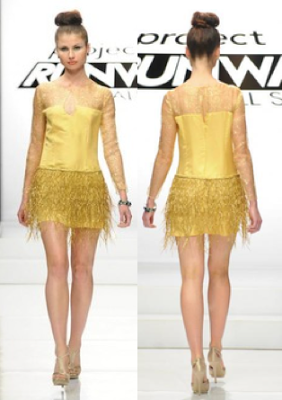 Casanova's look was all over the place. He struggled and ended up creating several looks. The one that he sent down the runway was made entirely of left overs from other designers. While he did a good job making something of nothing, he wasn't able to pull together a good enough design and was sent home. 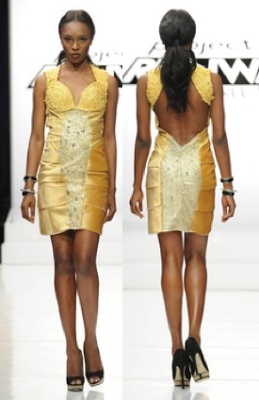 What did you think of this week's winner and loser? Who do you think will be the top three? I'm routing for Anthony Ryan and Uli.
Project Runway