By becca - November 30, 2012
This week host, Carolyn Murphy (Her name will not stay in my brain. I have to look it up every week.) came out in her best Victor/Victoria look to announce that the designers would need to make an androgynous look for their models. After sketching and shopping at Mood with only $150, the designers set to work. Soon, Georgina Chapman came in to deliver a twist--male models. At this point the designers actually had a lot of their garments sewn or at least cut so they all nearly had heart attacks about making their clothes fit these very different bodies. After they panicked, Georgina told them not to panic because they would still be dressing the female models but would have to go back to Mood for more fabric to make a companion look.
I loved this concept for a challenge. Usually I don't like when the designers have to make menswear clothing because this is a womenswear competition, but this challenge related the two well and gave us a chance to see the tailoring abilities of the all stars.


Safe Designers
Click through the slideshow below to read our thoughts on the safe designers.


Top Designers
Anthony Ryan's looks were my favorite. The sheer, geometric looks were eye catching and completely interchangeable for either gender. The looks were high-end, well made and interesting. Best of all, they were the most wearable clothes of anything sent down the runway. 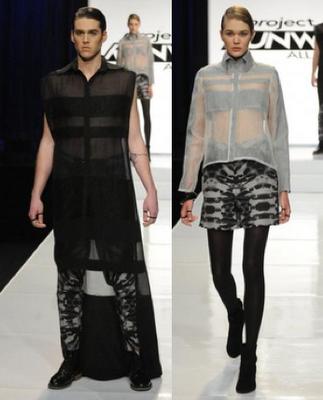 Uli was very unsure of how to translate her flowing and feminine style into androgynous looks, but she did a fabulous job. She played to her strengths, made really great clothes and somehow finished six pieces in two days--and she finished them well! 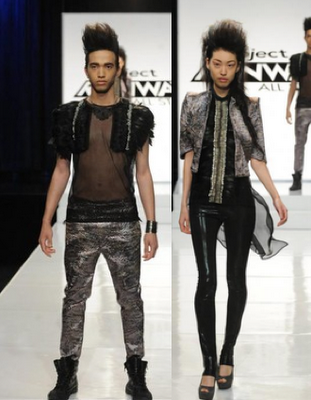 Emilio created the most visually stunning set of looks and deserved his win. These reminded me of graphic novel film noir-style characters out to solve/commit crimes in a The Windy City. They're just cool. (All of the pictures this week are kind of awful. I don't know why. You really can't see Emilio's look that well here.) 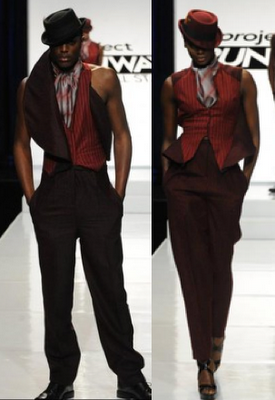 Bottom Designers
Casanova's set of looks had very little to do with androgyny. I don't think he really grasped the challenge, but at least his looks were well made. Actually, if these models were science fiction characters traveling in a space ship made from a hallway of the Vatican, these looks would made perfect sense as their uniforms. 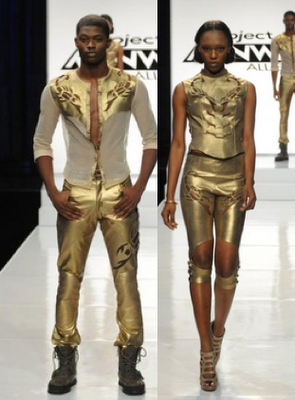 Laura was a downer this episode right from the beginning. She lamented that her aesthetic wasn't the least bit androgynous so she didn't know what she would do for this challenge. And they recapped her horrible quote from the last episode "They want me to, like, talk to them like we came form the same place. It's not going to happen." Apparently spoiled little rich brats don't have to speak kindly to the lowly workin' class types. Ugh! For some reason her non-androgynous. droopy cut-out clothes didn't go home. I might be biased because her personality is so grating, but I really wanted to see her gone. 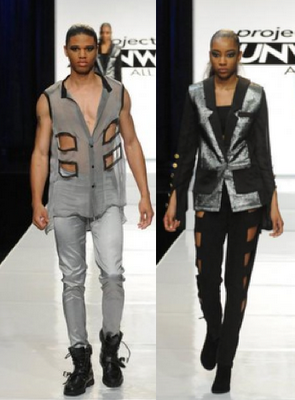 Kayne went home this week. The judges said his looks were beautifully constructed, but they were just too much. Mostly, their critiques focused on the color of the blouse Kayne put on the female model. They actually suggested he could have left it bare, which I guess would have worked. They called the color "coppery" but it looked yellow on TV so I'm not really sure what it was like in person. These aren't my favorite looks from Kayne, but I'm sad to see him go. If having well-made looks got Casanova a pass, it should have done the same for Kayne because his looks were certainly made better than Laura's. (Also, I may be biased here because his personality is fun. Talk to him on Twitter some time). 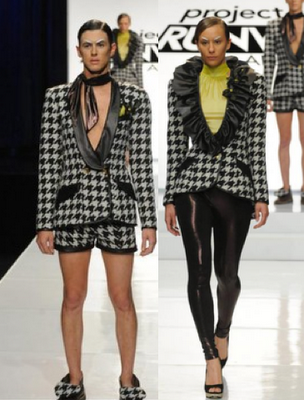 What did you think of the winner and loser this week? Which set of looks was your favorite?
MV2012 Project Runway

Unknown said…
I feel this was the best challenge of the season, and my favorite was Althea’s, although her look wasn’t very Avant Garde it was modern and androgynous and I loved the colors. Emilio did the best interpretation of the challenge since it was so difficult to tell who the male and female model was, but it was a bit creepy to see Carolyn Murphy swoon over Emilio’s model. Next week looks like another fun challenge, but I’m going to miss it because of my new work schedule at DISH. I’m recording this show on my DISH Hopper. I’m really bad with setting weekly timers; instead I set it to record the entire season. It is nice not having to remember weekly timers, and since there is over 400 hours of HD recording space I have enough room to record this show and my other favorite shows that air the same night. I’m sad Kayne is gone he did add the comedic relief to the show.
November 30, 2012 at 6:23 PM