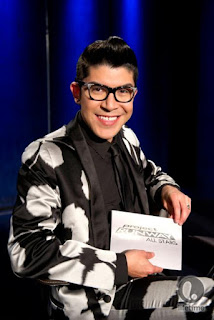 Last night, season 2 of Project Runway All Stars premiered with a new cast from season past, a new host--Carolyn Murphy, and newer, bigger prizes.

Our new host is no Heidi. She's still a bit shaky and uneasy. She also struggled on the judging panel. It's difficult to pull off host and judge. That's why most reality shows employ multiple people for the roles. Heidi does it because she's Heidi, but I think the All Stars producers would do well to break from format in the future. Thankfully, we still have Joanna Coles filling Tim Gunn's role for the all stars. She didn't get much time to talk last night, but she was already there to tell the designers just where they were failing.

Our cast is must different from last season. The first edition of all stars gave us a cast that mostly finished near the top of their seasons. In fact, only one member of the season one cast, Elisa Jimenez who was eliminated first, didn't finish fifth or higher.  This season, we have five designers that didn't make it to fifth place or higher. Season two also has more designers from more recent season, which means we might see a little less growth from the last time we saw them. There are also no season 4 designers, which means we don't have anyone from the best season (the season Christian won). This isn't to say the season won't be great. It already feels better than most of the recent regular seasons (except 10). I just found myself less excited by most of the returning designers. However, the designs from last night still showed plenty of promise. 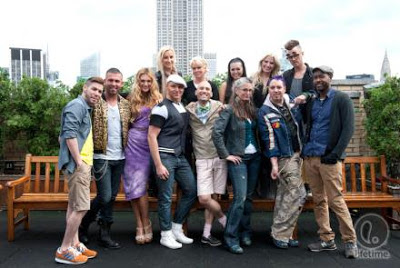 Joanna announced the first challenge would be a team challenge. I hate team challenges, but because everyone was fresh and ready to get going, this had a little less drama. Each team had to create a mini collection with one look per team member. The winning designers, and as it turned out the entire top three, would come form the winning team. The losing designer, and the entire bottom three, would come from the losing team. This is Project Runway All Stars so no immunity would be offered to the winning designer. The theme for the collections was supposedly "attitude." It was really more "pick one of these adjectives," but it's the first challenge so I guess it has to be broad. The teams formed as follows:

Team bold chose to make a black and blue collection. While they had some good moments, their collection left them a little bruised. They were the losing team. Team Confident took on leather and lace, which was risky because it could come off cheap or unoriginal. They took the win though and provided the top three designers.


Top Three
Casanova is back and seems less confused, which is good. We learned that he has been working for Ivy since season 8, and we learned that he didn't tell Ivy he would be on this season. He didn't seem to know she would be there either so they must have held to their confidentiality contracts very well. I'm not sure why his dress was in the top three. It was well made and pretty. He didn't make it look like a hooker-costume as Joanna had worried. However, it wasn't special or new, something guest judge, Mondo (!!!!!) kept pointing out. I would have put Uli dress or even Althea's in this spot.

Ivy seems fully aware of her status as season 8 villian. She seems to be back trying to redeem her persona as well as her 8th place finish. She created a very cool jacket. I'm impressed she was able to make such a well structured jacket and leather pair of shorts in such a limited amount of time. Most of the judges were impressed too. A few took issue with the placement of the lace. Others took issue with the use of a short. Mondo was all for this look, but the others had a different winner in mind. 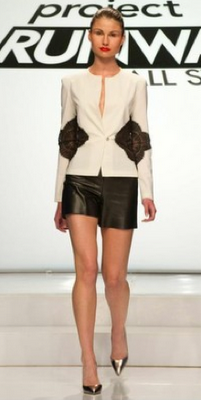 Anthony Ryan took the first win with a white skinny jean and a very surprising top. From the front it looks fairly basic, though well tailored. The back is made from lace, which give the look an option to go from day, under a jacket to night with an open-ish back. The judges loved how cool his girl looked and even gave him a pass on the fact that the pants weren't a perfect fit in the front (though they fit lovely from behind). I have no problems with this win. He or Ivy would have worked. I like Anthony Ryan's personality better though so I was happy to see him get it. 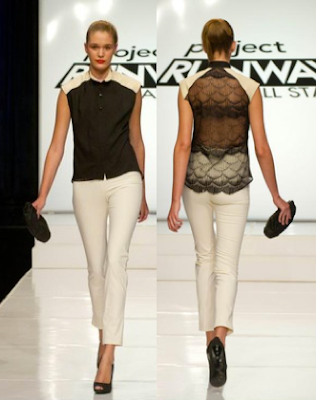 Bottom Three
Suede still refers to himself in the third person, and it's still annoying. He also still has a slightly junior feel to his designs. This napkin shirt had fun movement, but it didn't live up to the "bold" persona of the team or the level of sophistication the judges were looking for. Also he used breast cups to make the shoulder effect. This wasn't an unconventional challenge. He could have just used proper materials instead of going for a DIY effect, which never scores high with the judges. 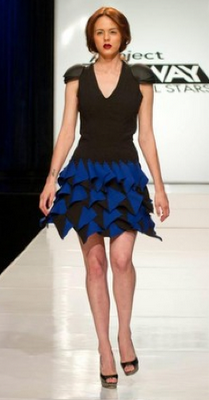 Andrae is from the first season I ever watched and he came in sixth so I'm struggling to remember him. However, he came off as very unsure from the beginning. His look seemed like a high concept thing, but he didn't pull it off at all. The judges agreed that he had a strong modern viewpoint, but he didn't live up to it. Thankfully he is safe for another week so try an show us something more understandable.

Peach was the designer on the list I picked to be the first eliminated. This isn't because Peach is bad at what she does. It's because she doesn't do what Project Runway wants. She makes cute, casual clothes. She even said she works as a tennis-wear designer. Project Runway is seeking a high-end fashion designer. That just isn't Peach. Her look was her at all and it wasn't well made. She rightfully went home, where I hope she goes back to making the cute, sporty stuff she's good at.

Safe Designers
Click through the slideshow below to read a little about the rest of the designs.

Project Runway All Stars Season 2 Premiere by fashionbeccafabulous on polyvore.com

What did you think of the premiere? Don't you love that All Stars is only an hour long? Shouldn't the regular seasons go back to that? It doesn't drag on at all. Who were your picks for winner and loser?
Project Runway