By becca - September 21, 2012
This week the designer's headed to Radio City Music Hall where they sat front row center for a short, private show from the Rockettes. At the end of the performance, Heidi joined the dancers with high kicks herself (and did quite a good job). She was clearly giddy about and honored by getting to share the stage with these iconic dancers. After the performance the designers were challenged to create a costume for the Rocketts. The winning design will actually worn by all 36 Rockettes during performances, which is a pretty cool prize.
Many of the designers struggled with this because "dance costume" is usually an insult Michael uses during judging so it's not something they seek to create. Dmitry was more than ready for the challenge after spending over a decade as a ballroom dancer where he started out by designing costumes. (I wish the producers would dig up a picture or video of a dancing teenage Dmitry. That would be awesome.) Christopher seemed to take right to the challenge as well. He was nearly hyperventilating at the sight of the Rockettes and calling for his inhaler when Heidi joined them. (Also he makes a lot of musical and theater references so something tells me he's spent a long time thinking about this throughout his life). The rest of the designers looked lost.


Safe
Fabio was the only safe designer. Right off, his look reminded me of armor. I thought this was an interesting take on a Rockettes' costume. He certainly made a workable design that was true to his point of view. I didn't love the turtle neck. While it was interesting and different, I can't see the Rockettes wearing something that warm and grey on stage. 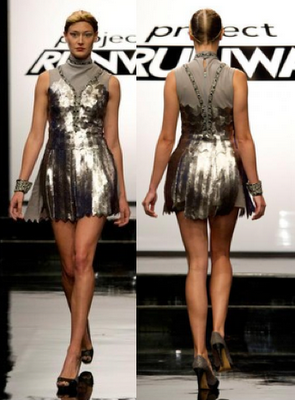 Top
Melissa wasn't sure if she was in the top or bottom, and the way the judges talked, I wasn't either. They really liked it while it was walking on the runway because of the punch of color, but closer up, they didn't really care for it. It had some construction problems and the design on the front accidentally looked like a number one. I think she would have been the safe designer if it hadn't been such a bright pink. She also might have found herself in the bottom had Christopher not give her some of his money at Mood, and had Ven not offered to help her hand sew part of it. 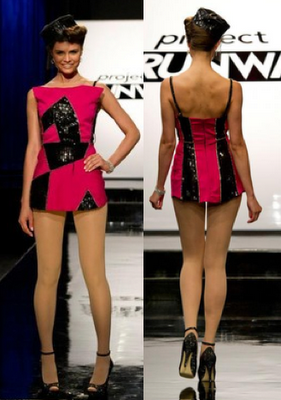 Dmitry probably thought he had another win with this challenge, and he almost did. The judges loved his look. It was modern, it had the right amout of sexy without being too sexy for a family-friendly production. It hugged the model's curves perfectly. It was modern and beautifully made. He was also the designer that thought about movement the best. His beaded fringe skirt would have moved great on stage .(All though beads might be tricky with repeated high kicks, maybe? I don't know. I can't barely kick, let alone do it high). 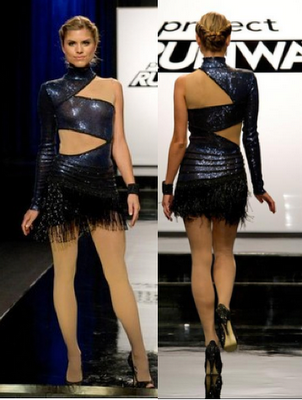 Christopher took a high concept design and knocked it out of the park theater. He created the New York City sky line on the the costume. I do wish he would have made a cuter skirt, but the bodice was stunning enough that I don't think anyone noticed the skirt. Tim recommended that Christopher add jeweled "stars" to the top of the costume, but Christopher didn't have enough. In fact, many of Tim's suggestions to all of the designer required another trip to Mood, which Tim gave them with another $100 dollars. Not all of them took it, but Christopher jumped at the chance to get more jewels and really make his look wow the judges. It worked. His dress was amazing. The iconic skyline was the perfect thing for the iconic Rockettes to wear, and even the styling of his model was great. (She could not do a jazzy walk though--at all). The judges gushed (and he gushed back at guest judge, Debra Messing). Christopher won the honor of having his look worn by 36 high-kicking dancers. 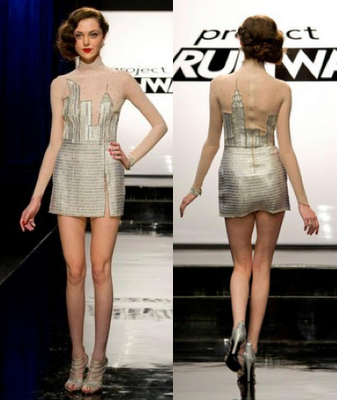 Bottom
Sonjia was falling apart before this even started. She couldn't get an idea together. She bought a bunch of stuff and tried to patch it all together. Even the second trip to Mood didn't help her. She ended up with a look Nina called a "little purple bird." Heidi worried about the smashed boobs because of the shapeless, flat top. Debra Messing, worried about the delicate feather molting on stage during those kicks, which would be a rather messy disaster. In the end Sonjia's bird was safe for another week. 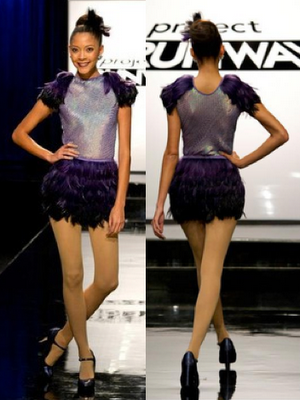 Elena is the only remaining designer who has not won a challenge. Her look prompted Michael to quip "She looks like a Vegas Cheerleader." The Vegas comparisons kept coming, just like the dress kept sparkling. Oh, did it keep sparkling! However, the judges gave her credit for breaking away from her habit of monochromatic shoulder pads even if, as Heidi put it, the dress could sing and dance all by itself. The effort to change and be vibrant kept her in the competition. Her efforts to be less stressed and kinder in the workroom paid off too. She apologized to Dmitry when the designers went out to dinner and avoided meltdowns most of the episode. 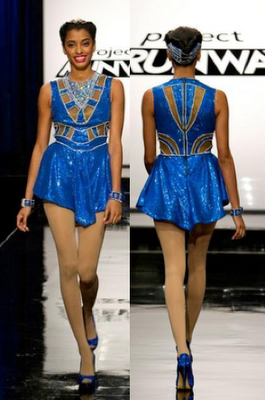 Ven went home. His dress was boring and not even well made. I'm not sure what happened here. He had to drop his origami effect because the judges were sick of it, but he didn't seem to have any other ideas. A few weeks ago I would have jumped for joy at Ven going home. However, he's redeemed himself a bit on the show. During dinner he opened up and it became clear that he is an extremely shy and isolated person who doesn't have a lot of social skills. That explains some of his issues earlier this season. Also, he was eager to help Melissa and save her look. I still think he needs to learn to treat women better, but I can't quite bring myself to sing "ding dong the witch is dead" even if I do agree that his design deserved to go home the most. 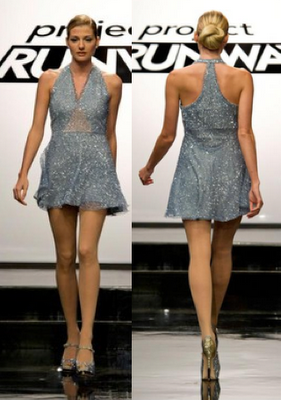 What did you think of this challenge? Do you agree with the winner and loser. We're down to the top six--do you have a top three? I'm thinking Christopher and Dmitry for sure. The third slot could be any of them. Are you dreading next week's challenge to celebrate Heidi's designer baby collection (don't get me started on designer baby collections) and the poor designers who have to take care of toy babies. I don't even want to watch it. I can hardly believe their doing it, especially this far into the competition.
MV2012 Project Runway