Tina Fey has appeared in my "Dress the Nominee" posts several times both because I love her and because she's struggled to get this red carpet thing. That's sort of bothered me, because I want a smart, funny woman to be able to dress herself. Understanding a cultural symbology does not make a person less or dumb or vain. The last couple of years, Tina's looked nice on the red carpet. Not best dressed or anything, but nice and safe and capable of dressing herself. This year though...wow. The color. The cut. The hair, makeup, and accessories. I don't know if she hired a stylist or if she is just more comfortable on the red carpet, but this Vivienne Westwood gown is is the best thing I've ever seen on Tina Fey. I love her. Did I mention that? Love. 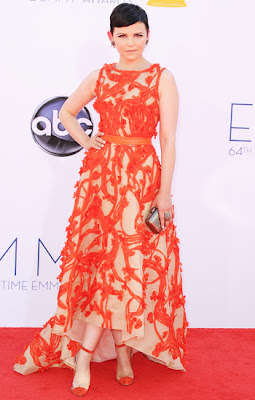 Considering that I suggested Zooey Deschanel wear this dress for the Emmys, it shouldn't come as a surprise that I loved Ginnifer Goodwin's orange Monique Lhuillier. I love the texture and the way the orange belt toughens up the sweetness. Speaking of sweetness, I'm sold on anything that has the color scheme of a dreamsicle. (Not everyone loves the hi-low hemlime, but I like that it shows off the shoes and isn't going to be tripped on.) The big question is: Would you rather have seen this dress on Zooey?

The Emmy Awards were gushing with color last night, and aside from a few fit misteps, most everyone looked lovely. Below is a gallery of other looks we liked (though may not remember by next year).

Emmys 2013 by fashionmefabulous on polyvore.com

Jennifer Wells said…
You and Becca have such an eye for style, and you always know what looks good.