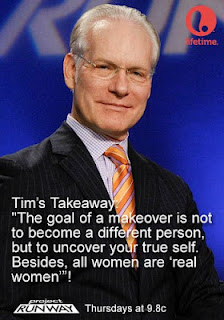 Ven may have great construction skills, but he's a jerk. I wish he hadn't behaved so badly in this episode. I like what I've seen from him so far. I love the he's a Polyvorian. But I hated how he treated his poor client.

Heidi began the episode by teasing that the designers would have new clients this week and introducing us to a new group of people. These people, however, weren't the clients. They were friends of the clients. Each one had nominated a well-deserving friend for a makeover. The clients were assigned at random, and the designers were give $150, one day and a consultation from the L'Oreal hair stylist to get the women fabulous new looks.

Several designers had big challenges. Sonjia was faced with a women who lived in hoodies and sports clothes because she didn't feel anything fit her right. Fabio's client was a total tomboy who didn't want to be sexualized and wasn't comfortable with her femininity. Dmitry, who works on very structured garments, had a client who put comfort above everything and didn't know how to wear more structured clothing. Elena, who loves monochrome, found herself working with a woman who loved color. And Ven had to work for his first "real" woman ever. Everyone else made it work. In fact, most of them were excited to work with the various shapes and sizes they hope will one day buy their clothes. Ven, however, whined for 90 minutes straight.

Ven started by complaining that his client had no sense of style and was too big. Later, when asked her size, he said "she must be a 14," as if that was the worst size ever. I'd hardly consider it a "challenging" size to dress for, especially because this woman had a nice shape and could actually wear a variety of clothing styles.

Ven complained in confessional that it wasn't fair other designers got thin clients when he didn't. He brought this point up several other times during the episode. During his critique from Tim, he called his client's appearance a "nightmare" and called her old, as in "almost 40." Tim told him she was just coming into her own, and it was his responsibility move her forward and bring structure to her figure with his clothes. (Applause for Tim! Way to put a positive spin on life!) Ven knows how to work fabric. If he could get over his snobby size-ism (perhaps looking in a mirror would help him because he's hardly slim), he might make some great, structured pieces for women of all sizes.

During the first fitting with his client, he told her that "black is very slimming" and made her try on belts that were obviously too small for her. He had her measurements so that was unnecessary. Christopher tried to signal him to cut it out, but he kept right on making the poor woman feel terrible. The day of the runway show, his client got fed up and asked him if he found a "fat enough" belt. He brushed it off without apologizing. He gave her a bunch of left-handed compliments along the lines of "I was so surprised by how great your hair looks." He couldn't give her a genuine compliment because he kept hinting at how awful he thought she looked naturally. 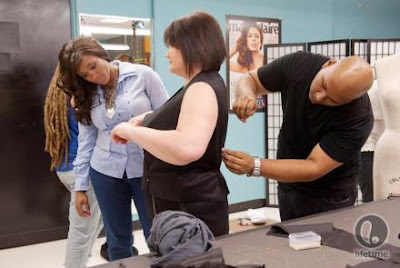 Honestly, I think Ven deserved to go home based on how demeaning he was to this woman who came to him for help. I don't even care about his talent after how he behaved. We don't need anymore people like him in fashion. He clearly doesn't like women and shouldn't be designing for them. In fact, next week we will hear him comment on how weak women are and will probably like him even less.

In other personality news, Elena redeemed herself for me this week. She was delightful with her client. And while trying to give Gunnar a compliment she ended up insulting his previous work. Gunnar took it well and focused on the nice part. She noticed her gaff and tried to recovering saying that she doesn't mean to be mean. I think team challenges just bring out the worst in her. Also, she was so likeable in this episode it made me wonder how much of last week was amplified by editing (although some of that had to be her).


The Top Three
Speaking of Gunnar, he was the best with his client this week. He complimented her hourglass shape, but she was concerned about being "full-figured." Her friend jumped in to reassure her, and Gunnar said "All of America is full figured. Where I come from we fry butter." He bantered well with his client and her friend. He went on in confessional to say that he wanted his dress "to look just as good on her as it would on that size six model." Gunnar was excited to work with her right away saying this is what he loved to do back home--dress the average woman. I think he did better and found more inspiration from his non-model-sized client than he has most of the season. He may not be the most talented or experienced designer of the bunch, but this challenge won me over to #TeamGunnar. His dress did need some tweaks, but he landed in the top because of a very happy client. 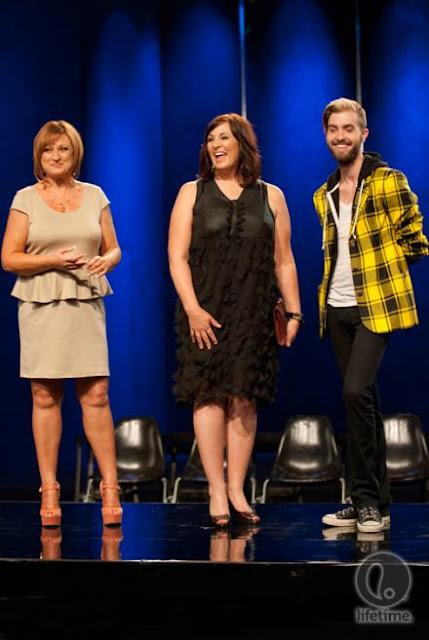 Dmitry has continued to make me love both his clothes and his sense of humor. This week's dress was a bit dull. I wish he had used some contrasting color in the styling or something, but it was an amazing fit. Plus, it was a very versatile dress that his client will probably wear a lot. He worked hard to make sure she would feel comfortable in whatever he made for her. Between his talent and his awesome sense of humor, I'm totally #TeamDmitry. 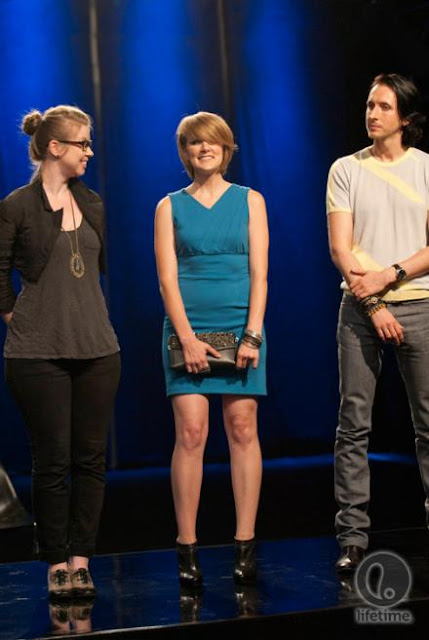 Fabio has finally come out of his shell. He made the winning dress this week, and he had quite a challenge. Even though Ven envied his "model-thin" client, Fabio faced dressing a women who wasn't comfortable being feminine and didn't want to look sexy. Yet her friend wanted to see her in a dress. He created a dress almost any woman would love. It was structured, yet comfortable. The various shades of grey allowed for endless accessorizing options. I would love to own it. His client adored it too. Michael Kors quipped that it took a boy in a dress to get her into a dress. I'm glad Fabio finally showed us how his personal style can come through in his designs. Everyone has been calling Dmitry the dark horse of this competition, but I want to see what else Fabio can come up with now. He totally earned this win. 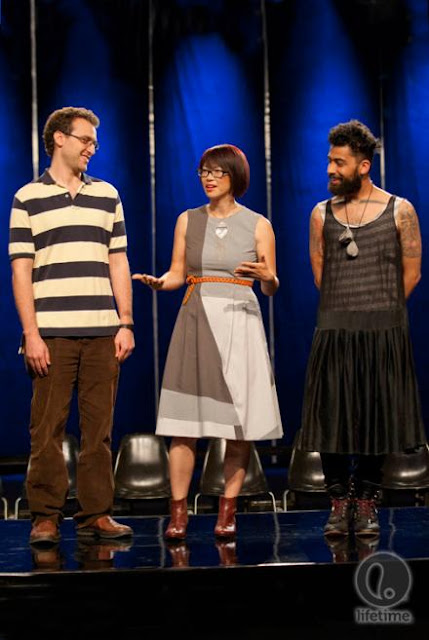 The Bottom Three
Sonjia really struggled with the proportions for her client. She tried to get it, but just fell short, literally. The dress was underwhelming as far as design too. This wasn't her best work, and it deserved a bottom spot. I'm glad she's not out though because I like her. 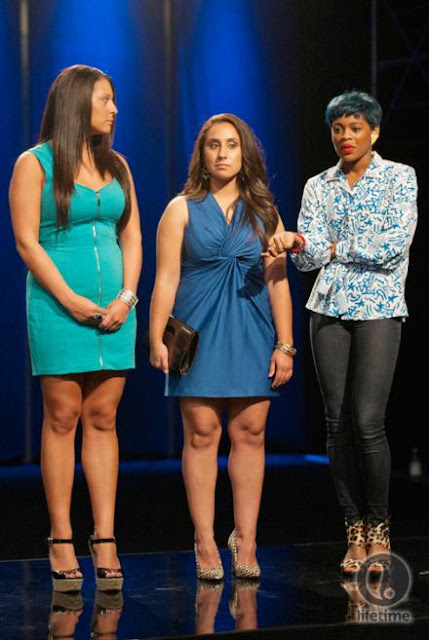 Nathan is out after failing to give this aspiring pop singer a great stage look. This wasn't a great dress. The fabric was a problem. He struggled with trying to please the client's list of wishes instead of designing something that would fit the persona she was going for. The judges said he got caught up in cliches and ended up being a tailor instead of a designer. His judging session did inspire a funny exchange between judges.

The client actually liked her dress and her experience working with Nathan, which is why I'm not sure Nathan deserved to go home. 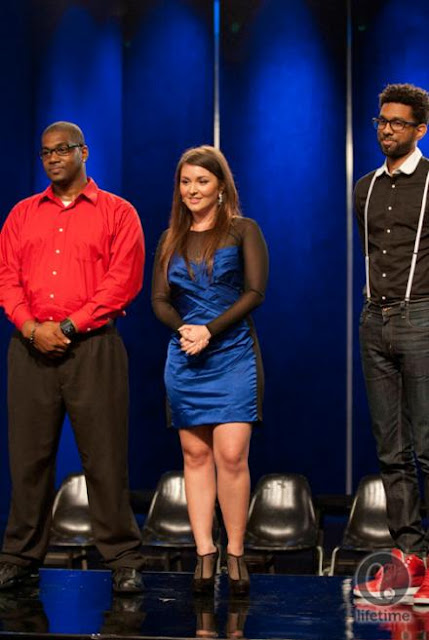 Because Ven's client hated her look and Ven by the end of the process. In fact, the client's friend started crying because she had wanted the hard-working mother of four with a four-hour round-trip commute to work to have a special day. Instead the woman was insulted and stuffed into an unflattering look that would never fit her life (a life Ven never asked her about). I know Ven is probably more talented than Nathan, but so far he has been a bit of a one-tricky pony--or "one-way monkey" if you speak Dmitry. A truly talented designer would have made any shape look fabulous, and he did nothing for his lovely client. I would have sent him home even though I had been routing for him. 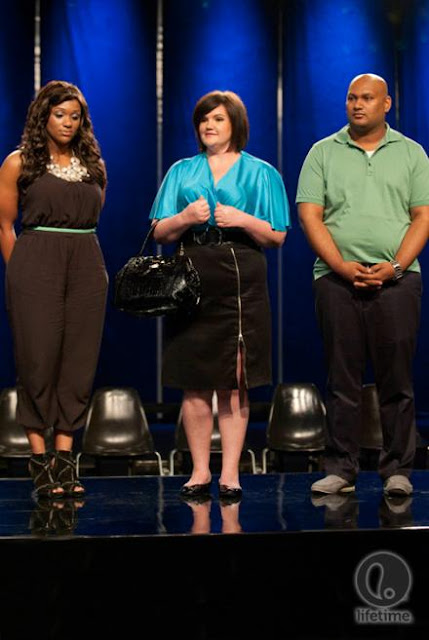 Safe Designers
Click through our slideshow to see thoughts on the safe designers:

What did you think of this challenge? Should Ven have gone home? Who are your favorites?

Anonymous said…
As horrible as Ven was, and he clearly needed to be escorted out, I'm most apalled at Heidi and the producers,and the other judges for allowing him to stay. What a shadow this has cast on their inteegrity.
August 24, 2012 at 8:15 PM

Anonymous said…
Ven needed to go home. I too had been liking his designs but with that attitude, there just are no words.

I hadn't been so keen on Gunnar up to this point but his client interaction this episode won me over.
August 24, 2012 at 9:14 PM

Jael Paris said…
Ven has a Twitter where he's continuing to be a jerk https://twitter.com/Venbudhu. I was pulling for him until this episode. Now I'd only want him to win if if he was competing against a mutant, dress-making spider. Even then, not sure.
August 25, 2012 at 12:40 AM

becca said…
Anon 1: I would have loved to see him escorted out. I wish the judges watched the workroom footage so they knew just how bad he really was.

Anon 2: Gunnar with his client really changed how I looked at him

Jael: I forgot to mentions Ven's tweets. Thanks for posting that. I usually watch the show three times to write this. By the third viewing I just couldn't take it so I decided to tell him off on Twitter. Not that it will help, but it made me feel better.
August 25, 2012 at 12:54 AM