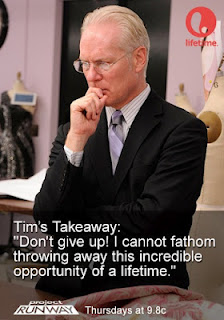 Last week's episode ended with Andrea's midnight escape. This week we skipped our visit with Heidi to go meet Michael at his new store where he told the designers they needed to make a versatile and fashionable all-day look--the kind of thing that could take a women from day to night. Quickly, Tim jumped in to deliver the Andrea news. She had left without telling anyone, and they couldn't reach her. This sent Christopher, her partner from last week, reeling. He felt bad that he may have contributed to her decision to leave. There was no time for sadness though. The designers were off to Mood then back to the workroom.

Workroom tensions were high after last week's team challenge. Kooan took things up a step by announcing he would also like to leave. The other designers tried to talk him out of it, but he had decided. Tim visited the workroom to announce that they'd received and email from Andrea and Raul would be coming back. Before Tim could even mention Raul, Kooan interrupted with his plans to leave. Two designers down and no one had even started sewing yet.

I understand that this competition is tough. They rush the filming more than ever now, which I'm sure makes it even harder. However, you can watch previous seasons and know that. You can also know what the challenges and judges will be like. It's the 10th season. I feel like 10 seasons gives perspective contestants a good idea of what will happen. Also, it's a reality TV show. They are going to push your buttons, make it hard and watch you crack. That's how it works.

What did you think of the designers leaving? I don't miss Andrea, but I thought Kooan had some potential. I was hoping he'd get it together and make the judges understand his crazy style at least a little bit.


Top
Dmitry cut his dress perfectly. It's so well made. He chose the perfect fabric and created an interesting detail in the front. The judges like it but wanted it to be more innovative. They said a brighter color would have helped (I think it should have been hot pink!). I thought it was lovely, but I take issue with the open back. This is supposed to be an all day dress. If I'm going to pick a dress to wear to work then a party and everything in between, I want one I can easily wear a bra with. You might be able to wear a bra, but I would worry about it peeking out in the back all day. 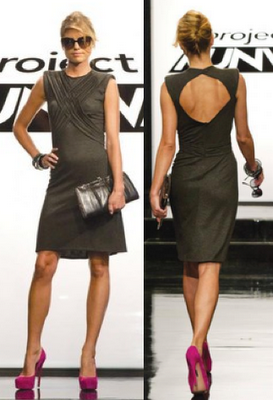 Christopher created a great jersey dress and little leather jacket. He only had a $150 to work with so this really impressed the judges. Nina picked it as her favorite, and I think Heidi was with her. However, Michael said something about the execution bothered him. I don't know what. It looks fine to me. I want this. It was my favorite look of the night. I think it should have won. He made two pieces, styled them well (blue shoes!), fulfilled the challenge and made Nina gush. 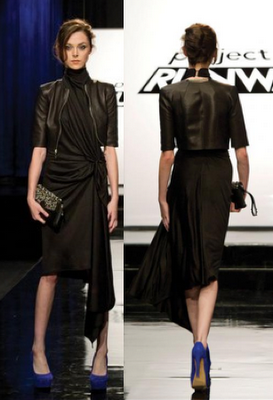 Sonjia was far from undeserving with her win though. Her grey dress was perfectly draped. I'm not even sure how she pulled it off. I would totally wear this all day. I think two things gave her an edge over Christopher--1. This was grey not black, and 2. Guest judge Hayden Panettiere wanted to wear this one. That second part wasn't part of the challenge, but she asked Sonjia if she could wear it to a red carpet event. My only complaint with Sonjia's dress is that you could see through the fabric between the model's legs on the runway. I hope she makes the fabric thicker when Hayden wears it because flash bulbs are not friendly. 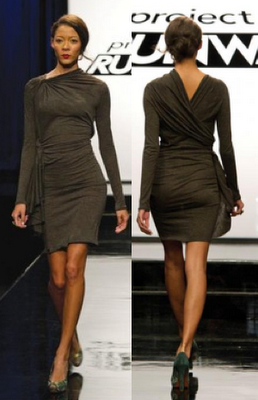 Bottom
Raul found himself back in the bottom, and I thought he'd be going home. His pants were horribly made. (Making pants for men and women is a different process. Most clothing manufacturers have a problem with this so I supposed I shouldn't be surprised Raul struggled). The belted vest/coat thing was all strange and pointy and wide. When he unbelted it for the judges, I think he saved himself. Michael said it had been on death watch for him, but the belt removal saved it. Second Guest Judge Rachel Roy applauded his ideas but said he needed to edit. She also argued for him to remain in the competition and must have overruled Michael's snarky comments about Raul already being eliminated because he was safe. 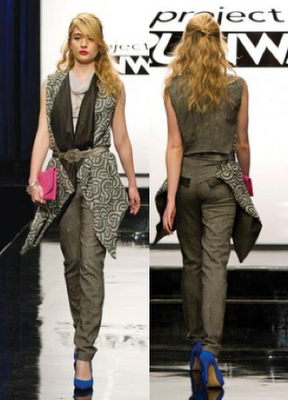 Fabio created a cute dress, but it was boring. The proportions looked shrunken with the too-short dress and cropped jacket. The print didn't even come close to lining up in the back (even Forever 21 lines their prints up better than that). The thing the judges really took issue with was his lack of personality. He has interesting personal style, but none of that shows up in his designs. I think this visit to the bottom two was the judge's way of saying "show us who you are or we're getting rid of you." It will be interesting to see what he makes next if he heard them. 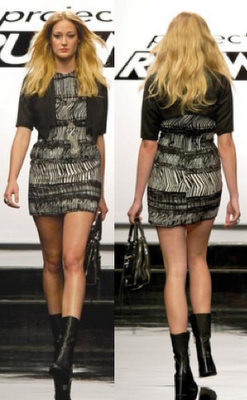 Buffi's taste-level caught up with her. The poorly made Zebra print under a tacky pink poncho earned her a trip home this week. I don't really have much to say other than it didn't look good and wasn't made well. Christopher tried to warn her, but she just got huffy and went to complain about him behind his back. (He apologized for upsetting her, and she waved it off like it was helpful). I'm not sure her Trashion Barbie look was going to go far so I'm not too sad to see her go. (Even if her accent and hair were kind of fun.) 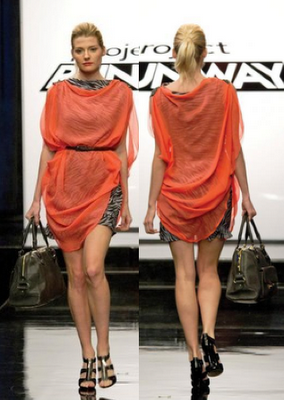 Safe
Click through the slideshow to read thoughts on the safe designers:

What did you think of the winner and loser this week? Do you have a favorite designer yet? I don't know about a favorite just for their fashion, but I'm totally #TeamChristopher as far as personality goes. I think he's pretty promising in the fashion department too. (Plus, he reminds me so much of Michael Costello). Are you dreading next week's team challenge as much as I am? Do you think the producers know how unfun it is to watch team challenge?
Project Runway