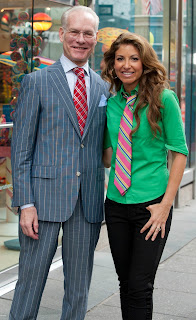 This week the designers took a trip to Candyland for their unconventional materials challenge. Actually, they took a trip to Dylan's Candy Bar where they met Dylan Lauren, candy bar owner and daughter of Ralph Lauren. That's one sweet fashion pedigree. The designers were given a $250 budget with a 50% off discount and ran to grab $500 worth of candy. I have no idea how they refrained from eating their materials. The best candy store reaction came from Tim who seemed beside himself at the idea of candy Legos that could be used to really build things.

Drama is starting to run high in the work room. Yooan was less annoying this week, but Gunnar stepped up the diva and took a tour of the workroom that had Christopher rolling his eyes so hard I thought he might lose them in his head. It didn't stop Gunnar from finding his way to the top three though. Gunnar and Christopher are totally in feud mode. I think I'm team Christopher, but only because he reminds me so much of Michael Costello. (Michael has taken to calling Christopher his "mini-me" on Twitter).

The challenge was an excellent one. Candy is fun, so it brought fun to fashion. The designers who were up to the challenge really transformed the medium and made beautiful clothes.

Gunnar may have wasted a lot of time wandering around the workroom, but he created a garment worthy of the top three. Its print was fun, the dress fit well and moved well. I don't think it was quite as fun or vibrant as the other top looks. While a candy challenge doesn't have to be candy-like, a little more fun would be good. 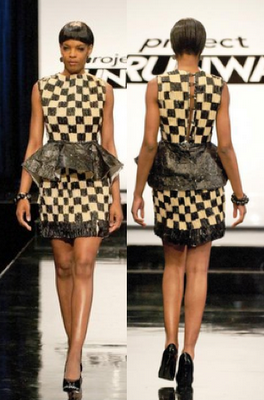 Sonjia was my favorite of the top three. I love the sea-glass look to she achieved by piecing together such a wide variety of candies. I think this might have been the favorite of our guest judge, Dylan, because it used so many different candies. Tim loved the use of the candy sharks on the collar, as did the judges. Heidi didn't like that hat because she thought it made it too much like a costume. I agree that the had wasn't needed for that lovely dress. Nina actually didn't mind that it was a little costume-y (!?). She liked the "Judy Jetson/Mermaid" vibe. I thought this was beatiful and original back and front. 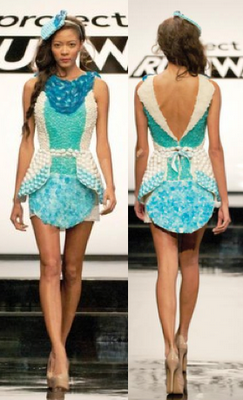 It's hard to argue with Ven's design winning though. It was stunning. He used licorice to create the "leading" of the stained glass window then crushed rock candy to create the look of the glass. It's beautiful. I echo Dylan's complaint that he only used two types of candy, but there was no requirement to use more than one type. (I just think it shows Sonjai did a little extra). Nina called it candy couture. Michael liked that he didn't over accessorize. I didn't love that he repeated his rose print. It's so so pretty, but he already showed that to us. I'd like to see what else he can do (because he is making some lovely clothing). By the way, Ven has worked with one of our favorite sites, Polyvore. He even has a profile there. 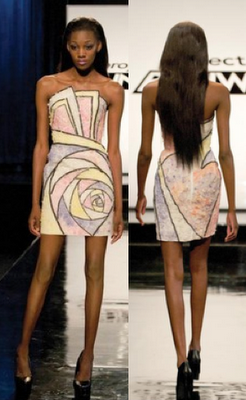 The bottom three didn't fair so well with their candy concoctions. Buffi's look didn't seem that bad when I first saw it on the runway, but a close up look totally changed my mind. She wanted to go Carrie Bradshaw, but ended up with Toddlars and Tiara's: the Paris Hilton edition. I know Buffi's style is a bit cluttered and chidish, but that can be done well or it can look like this. I do like that she tried to weave the candy for the top, but that's about it. Nina called it a pink explosion. Michael said he just wanted to cover his eyes. However, Buffi did use the candy in interesting ways so she was safe. 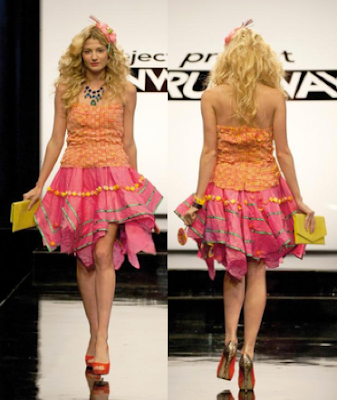 Elena did not win herself points with the judges this week. She didn't seem thrilled about the challenge from the beginning. She choose all pina colada licorice, which was one color and so hard to glue she ended up with severe burns. I understand where she was going with this design, but I agree with the judges that it came out boxy and boring. As Michael said, she took the joy out of candy. Elena decided to fight for her vision and told the judges she was just staying true to herself. This upset them even more because most the other designers managed to stay true to their style while doing the challenge. She will have to watch her attitude int he future, the judges don't take well to that. 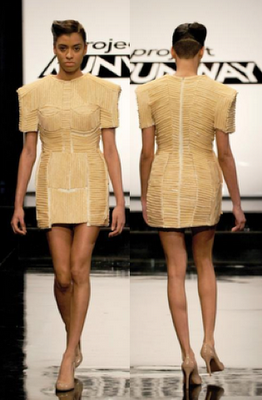 Lantie, who found herself in the bottom two last week, ended her run on Runway this week. She scratched her first design at the last minute and made everything out of umbrella fabric. This is death in an unconventional challenge. Not only did she basically cheat by using too much fabric, she didn't even make a very good dress. I thought she deserved to go home last week. I have no problem seeing her leave this week. 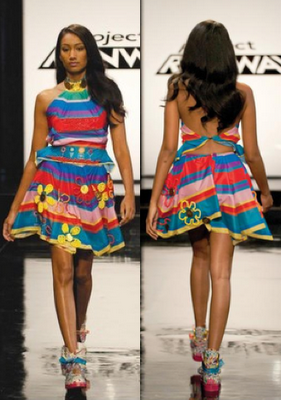 Below is a slide show of the rest of the looks with a few comment on each one. Tell us your favorite and least favorite looks in the comments. Also, which designers are you cheering for so far?

Rachel said…
I love unconventional challenges! I agreed with both the winner and the loser. Many of them did a great job! I would have eaten all the candy too ;)
August 1, 2012 at 11:13 PM