Pick of the Week: Chic Pony 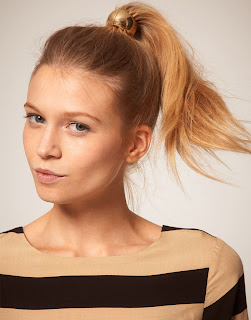 My hair is touching my shoulders. My shoulders. That hasn't happened since 2007, and it's kind of freaking me out. My hair's been so short for so long that I have to relearn hair styling. A brush? You mean my fingers won't do? Why aren't two pins enough to keep this out of my face? OMG WHAT IS CRAWLING DOWN MY BACK?!?! Oh, shedding. Yeah.

Rather than dive right into the Victory Rolls (which I rocked often in college), I'm starting simple. Ponytails. It's been five years since I could make a ponytail so now it feel very new. I'm not making messy gym ponys either. I'm combing and defrizzing so it lays nice and flat then gathering it at the nape of my neck. Unfortunately, my old scrunchies are ruining the chic effect. They're not, thankfully, large fabric relics, but they do sort of stand out. This gold-hinged ponytail holder would also stand out but in the best way. It's the sort of thing you wear with a little black dress, strappy black heels with gold buckles and a gold box clutch. Or at least you can feel like you're wearing that when you're really in jeans. The holder is $15 at ASOS.

As a complete aside, this marks two weeks that our pick of the week has featured an ASOS model making a face Tyra would critique until the tears flowed. That just goes to show how cool the item is if the unmodeling isn't detracting from it.
hair Pick of the Week

Jennifer Wells said…
I have to watch it with the ponytail, because it's so convenient. You're right, styling long hair is sometimes a challenge.
April 24, 2012 at 9:39 AM

becca said…
I love the chic low ponytail. This holder is perfect.

I wish I could do the sleek high ponytail, but no about of defrizzing, straightening, or products can keep the frizzies around my face from making me look like I just left the gym. My bangs help some, but not much.
April 26, 2012 at 12:13 PM