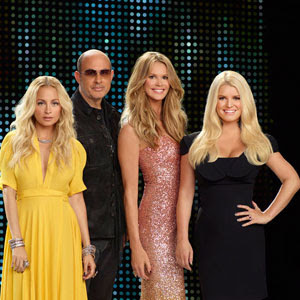 Last night, NBC debuted it's new fashion show, Fashion Star. The show boasts a fast fashion feel with clothes you see tonight and can buy tomorrow in stores. The designers show three pieces each week. The mentors, Jessica Simpson, Nicole Richie and John Varvatos, offer their advice to help the designer grow. Then, buyers from H&M, Macy's and Saks Fifth Avenue get a chance to bid on the designs. Designs go to the highest bidder after the buyers take turns upping the price if they so desire. Any purchased design shows up in that store the next day. Designers who don't get offers are at risk to be sent home. The buyers pick their bottom three, and the mentors get to save one. Finally, the buyers eliminate one of the remaining two designers. The last Fashion Star standing at the end of the season wins the grand prize to launch their collections at all three sponsoring stores. The concept gets less confusing as you watch it. 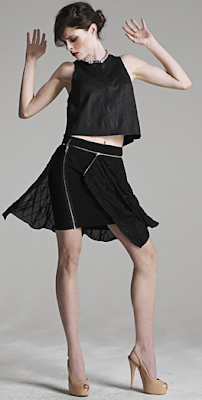 "Every great designer began with one piece that changed the world," said host/model/designer, Elle McPherson. She went on to reference Ralph Lauren's polo shirt, Diane von Furstenberg's wrap dress and Coco Chanel's suits. For the opening week, the designers were asked to show a signature piece styled in three different looks. I loved seeing each piece done three ways, which showcased versitility. I also liked that the clothes all have a chance to go into production, which is something we've all wished for during various Project Runway challenges. However, we probably won't find any Chanels through this show because the focus is on ready-to-wear clothing that will fly off the racks. Designs need to hit current trends while being just unique enough to stand out (but not too unique because buyers won't take a risk). Basically, the show guarantees the fashion will never be too exciting. The best innovation of the night was a convertible mini skirt (pictured left) that featured a removable flouncy layer to reveal a fitted skirt. The flouncy layer worked as an accessory, like a scarf, on it's own. Saks Fifth Avenue bought it so you can find it there today (never mind, it sold out).

The designers have a team of sample makers, models and makeup artists so there is no drama in regards to terrifying time restraints or learning to sew in four months. Menswear is allowed, which is pretty cool. We get brief comments from the mentors during workroom time, which helps us get to know the designers& design a little (one already got eliminated for his bad attitude), but the focus is on the runway and buying process. You also get to see designers dreams either come true or get crushed in under 10 minutes. They don't dawdle. Sadly, the pace made them brush past four designers, including one that received an order. I hope that stops when we have fewer designers to see. 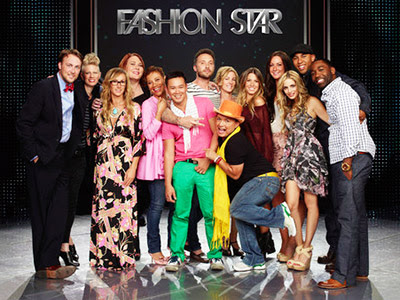 So far the premise is pretty simple even if the process is hard to explain: See cool clothes tonight, buy them tomorrow. If a designer doesn't get an order, they could get kicked off. Eventually, someone wins. It's an evening of fast fashion shows and quick decisions. (Maybe they're hoping the fashion frenzy will lead to impulse buying). I worry that the fashion could get boring and the show could get repetitive. Only time will tell if this new fashion show will be a lasting star.

Did you watch? What did you think? Are you buying anything you saw last night?
TV + Film

Anonymous said…
This show is really much less interesting than I thought it would be. None of the clothes I saw last night fits my category of "fashion". Even the focus is on ready-to-wear, none of the shown pieces speak something "new" or "different" to me. I think that Project Runways is much better
March 14, 2012 at 4:35 PM