By Jael Paris - February 28, 2012
becca and I were saddened by the lack of dramatic ball gowns at this year's Academy Awards, but there was still plenty to enjoy on the red carpet.

Michelle Williams and Jessica Chastain scored the most memorable looks of the night. Major points for Michelle breaking out of the neutral crew neck mold even if I actually don't much care for the cut of her gown. The color is superb on her, and the ruffles also stood out in a sea of sequins. The pink clutch is a cute touch with a coral dress. 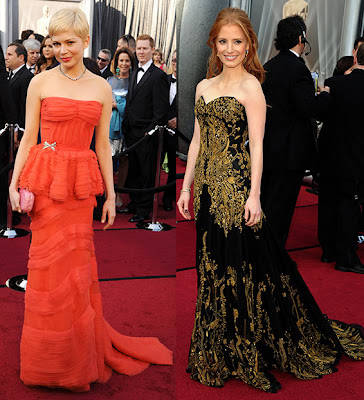 Jessica's dress fit her perfectly, and the ornate beading and embroidery were unique on this red carpet. Sometimes detailed gowns don't work through the camera's lens (ahem Rooney Mara), but the high contrast worked in photos and, no doubt, in person.

TV personalities Nancy O'Dell and (uhg) Kelly Osborne also looked pretty fabulous. Usually the TV hosts tend to look more prom or they just can't get a stunner of a dress. Nancy's cheerful yellow with black lace overlay and Kelly's black bias-cut with green sequin vines (and a green manicure!) were distinct and lovely. I especially like Kelly's hair color with her dress. 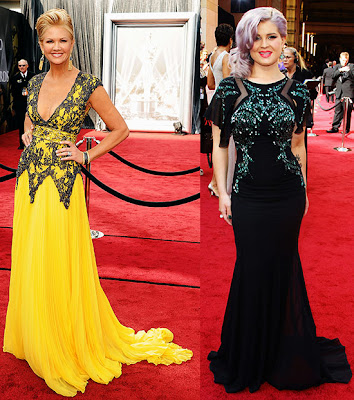 Viola Davis' gown wasn't a great fit, but we love her hair. We've all heard that African-American hair can be difficult, prompting many women to get weaves or, in Viola's case, wear wigs. That's fine and good, but I have to applaud her for not feeling the wig is necessary all the time. Comedian Judy Greer also switched up her hair though not as dramatically. Maybe she's been sporting it for a while, but I've never seen her as a brunette before. New hair color and a graphic take on the ubiquitous sequin gown and she was a red carpet knock out! 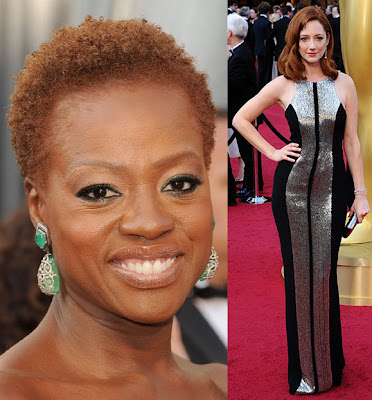 Christine Rosko said…
Jessica and Nancy were gorgeous. My personal favorite was Maria Menunos. I would love it if you checked out my Oscar Faves!
http://xadayinthelifex.blogspot.com/2012/02/oscar-fashion.html
February 28, 2012 at 12:58 PM

Jael Paris said…
I wish other celebrities would follow Viola's footsteps and cool it with the extensions.
February 28, 2012 at 2:59 PM