By Jael Paris - January 24, 2012
I've been doing Dress the Nominee for a few years now, and my goal is always to pick a memorable dress which is not necessarily something that will get you on the best dressed list. Some of you love my choices, some hate them. So you may be wondering, what red carpet looks do I consider memorable?

Halle Berry's yowzah! from Elie Saab in 2001 is one of my favorites. Granted, I'm biased because it's my favorite color, but that top manages to be classy and outrageously sexy all at once. Few woman can pull this off and most would look cheap in the process. 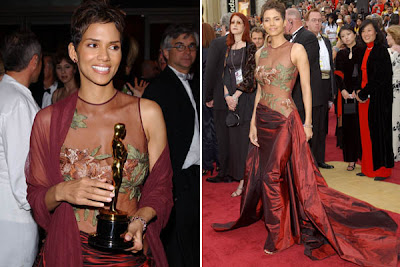 I'm a sucker for a pale girl in saffron because of Michelle Williams. From the color to the makeup to the pewter jewelry, this is a complete home run. (Imagine how boring this would have been in black or beige.) Michelle usually looks nice on the red carpet, but she's never looked sexier than in this dress. For her first trip to the Oscars, this was perfect for introducing yourself as Hollywood's fastest rising star. 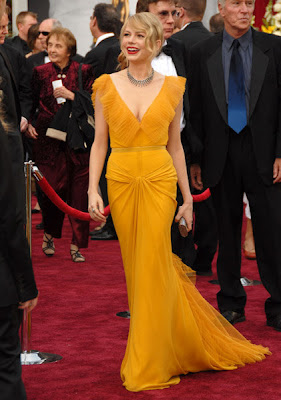 What? So I have a thing for Cate Blanchett. Doesn't everyone? She gets it right over an over and has fun doing it. Pale yellow on a blonde? It works (the belt made it memorable for me). How about an ode to armor? Or not just a print, but a big eagle print? Lilac beading with touches of chartreuse? Perfection. 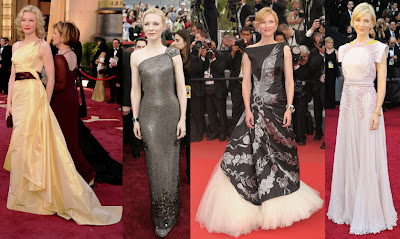 Nicole Kidman is hit-or miss, but these two dresses have stuck with me. It's significant that this chartreuse (again!) John Galliano was worn in 1997. 1997! Great fit plus gorgeous embroidery equals the first time people talked about Nicole Kidman as a legitimate movie star without making it sound like she was riding the coattails of then husband Tom Cruse. In 2005, Kidman wore this peacock blue dress to the Golden Globes. I only remember it because of the feathers. Take the feathers away and it's boring. 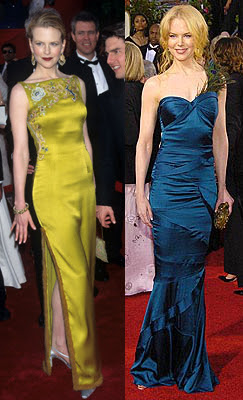 It would not be a stretch to say Bjork's swan dress worn to the 2001 Oscars is the most memorable red carpet look of the last 20 years. Most people talk about this dress with disdain, like it's a synonym for crazy, but I like it. Be honest, if that dress didn't have a head, wouldn't you think it was Marchesa? 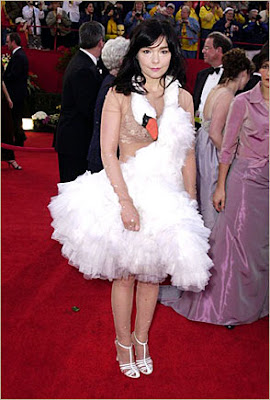 Lady Gaga is also often used as a synonym for crazy, but I like how she managed to make these normal (The white Armani she had specially altered.) gowns completely her own and wear the hell out of them. 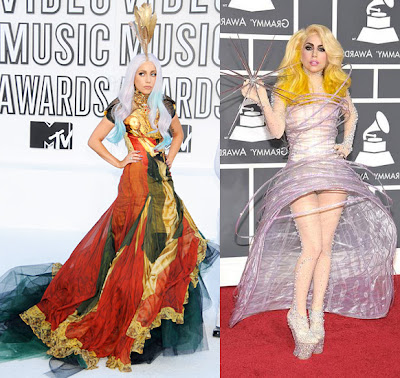 Other memorable looks are memorable because they demonstrate a key fashion principle often forgotten in the scrum to stay off the worst dressed lists. At the 2007 Met Ball, Cameron Diaz remembered the importance of accessories and color. Keira Knightly used a big necklace to accent her dress for her first Oscar trip in 2006. (This dress reminds me of this painting, so it stuck in my head when a dress like that normally wouldn't.) Eva Green thought bigger for the the Cannes Film Festival and made a splash in Dior Couture. For her Oscar night, Julia Roberts went linear. Rihanna (in orange nails) and Marion Cotillard were textural sensations at the 2008 Grammys and 2009 Oscars respectively. 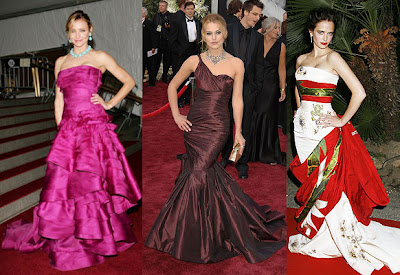 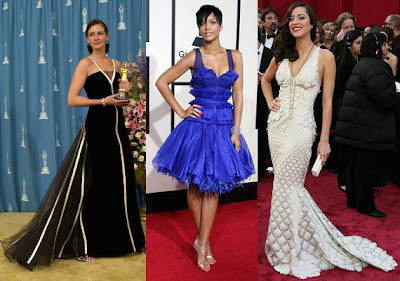 What are your favorite red carpet looks and why do you remember them?
celebrities MV2012

Jennifer Wells said…
Honestly, I pay very little attention to the Oscars, who's wearing what at the Met, etc.

Bjork's dress is what it is, and for people to say "That's weird," is like someone saying brie smells like fermented milk. I'm slightly annoyed when people point out that an outfit is odd, when, hello, we all can see that. Including the person wearing it. It reminds me of an article in the Onion where Darius Rucker is describing George Clinton's clothing as, "Quite frankly, garish."

My favorite of all of these dresses would have to be Lady Gaga's colorful gown. It looks like a beautiful, rich oil painting.
January 24, 2012 at 11:55 AM