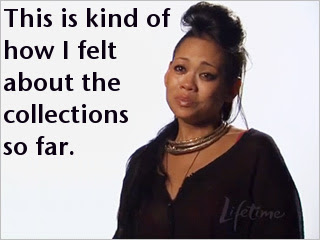 Time finally came to see the designers in their natural habitats, and that time seemed very abbriviated. The Tim Gunn visits were super short (considering he had to had to travel to Trinidad for one of them) and a little disappointing, since I so look forward to seeing families welcome Tim into their rituals and traditions. (You better believe my Armenian family would try to feed him to death while asking him far to0 many personal questions.) In fact, the often standoff-ish Viktor had the most natural and endearing home visit.

Soon the designers were back in New York City living in a fabulous suite with a garden. Tim went over their collections with them and announced that each designer would have to show three pieces on the runway to determine which three would make it to fashion week. I was really surprised they didn't have to make a new look. Actually, I think making a new look would have been good for some of them.

What I liked most about this episode was how much feed back the designers got from Tim and the judges. They really got to see their parts of their collection in new light. I just hope their given the time to fix some of their problems before they have to show at the Lincoln Center.

Joshua was the first designer to get through to fashion week. (Viktor should have been first). His collection showed incredible growth. He learned to edit. His styling was the best of the group. He had great ideas, and did most of them successfully. That said, I don't think this collection is close to ready for fashion week. I loved the neoprene jacket with the hot pink pants. I wasn't sold on the multi-color top, but I don't hate it under the jacket. I liked his take on an LBD, again done with neoprene* (I don't think it fit the model great though). His final look was the body suit equivalent of a skort. It looked like a gown from the front and Catwoman from the back. Holy tight pants, Batman! This is the sort of creation that usually has the judges verbally beating the contestants with sticks, but it earned him the first spot at Fashion Week. Yikes. 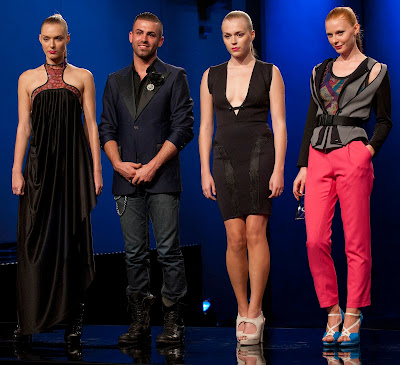 From what we've seen so far, Viktor is the clear winner, but last season taught us that "clear winner" is a nonsense term. According to the judges, his only sin on the runway was not styling his pieces properly. Michael Kors hated the jacket with the gown, but loved it on Heidi when she snatched it off the model and tried to pretend she wasn't going to keep it. Since they had to cram everything they could into three looks, I don't blame Viktor for overloading his models with clothes. Kimberly left off a jacket, and the judges scolded her for it. In this case, I think getting more on the runway was a better choice. I liked the cute dress he opened with. Nina said he didn't need the leather zipper skirt over it, but I liked it. Also, I need that leather zipper skirt to wear over all of my dresses. The glass top with tux jacket and print pants worked very well even though that description without a picture would sound like a disaster. I thought the gown was very pretty. The jacket, of course, was awesome. I liked his work. I think he should win, but I don't think this is Project Runway at it's best because I feel like I've seen the jacket, gown and tux jacket before. His use of prints was very good though, and the glass top was a fun take on sequins. 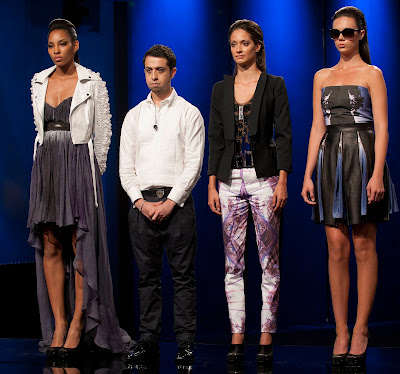 Kimberly was the next name called for fashion week. Her collection was all over the place. I think it was better than Anya's. It was certainly better constructed and better thought out. I'm glad Kimberly tried new things, finally. I'm just sad they didn't work. The pants and top looked like bright PJ pants and a top made from a pillowcase. The bubble skirt didn't look finished. The top that went with it had all it's design in the back, which had way too much going on with the bubble butt skirt. The shimmering dress was very pretty but very available from my local prom/bridal outlet. The judges mostly focused on her poor styling. 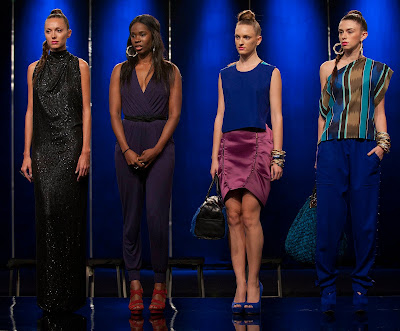 Anya was then also deemed worthy of fashion week. I knew this the moment the judges started calling names with a smile. Nina was smiling, which meant Anya was in. Heidi was smiling, which meant Nina wasn't the only one to get her way. Anya's collection was one of the most disappointing things I've ever seen on Project Runway. (The only things more disappointing that come to mind are Wretched Gretchen's win and Season 6). Only her first dress was cute. It was also horribly ordinary. The bathing suit was poorly made, sad, old fashioned, matronly, too low cut to be practical, stop me anytime... Michael Kors nailed it when he called the gown tortured. In fact, looking at it made me feel like I was being tortured. What happened?! Anya has been so so good all season. How did she make a collection that looked so so bad. I really doubt there is any way she can pull this together for a convincing win. That's not to say she won't win. Nina loves Ayna like Nina loved Gretchen, and we all remember where that got us. I don't begrudge Anya a win, but I don't think she deserves it based on what she has. 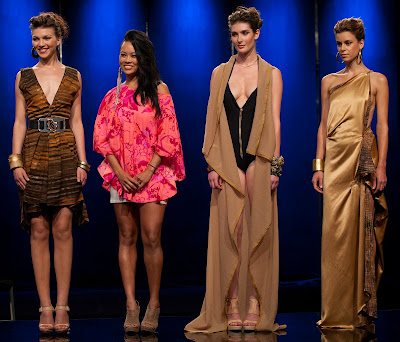 Closing Thoughts
Who do you think will win? What did you think of the collections? Are you dissapointed? Are you holding out hope for something more? Are you joining us for the live blog next week?

*Neoprene always makes me think of Ra'mon, who did that one really cool, last minute neoprene creation only to be kicked off too soon. Why aren't you on Project Runway All Stars, Ra'mon?
Photo Credit: Barbara Nitke, Mylifetime.com
Project Runway

Elizabeth said…
I'm really starting to think that the producers of Project Runway will do anything to keep Anya going. I first thought this when she lost her money, they just happened to give everyone extra money to make another look so she could buy some more things.
October 23, 2011 at 6:30 PM

kaye said…
Anya has been my favorite throughout this entire season, but I really thought she should have gone home today. Her collection was just sad, and I can't believe she hadn't made a single thing by Tim's visit. If she does win, I hope it's because she seriously pulls herself together, not just a publicity stunt.