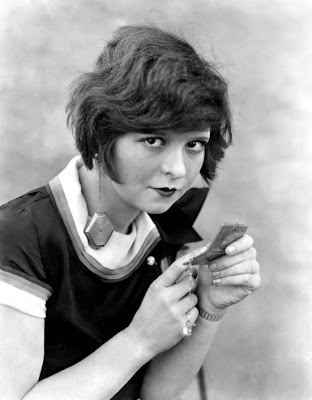 If you hadn't read the title (and maybe that didn't even help), wouldn't you think this was a modern picture? The mussed bob, one giant locket as an earring, girlish top, dramatic lipstick, and most of all the self-possessed stare all seem so now. She looks like the quirkiest of art students. But the image left is of Clara Bow -- flapper icon and Hollywood's first sex symbol -- in the early 1930s.

Flirtatious and sassy, Clara wasn't a damsel to be saved. She was a star; not a star's accessory. While other actors at the time were still proffering their stage mugging for screen, she was intimate and familiar -- a person to be not a person behind a mask. 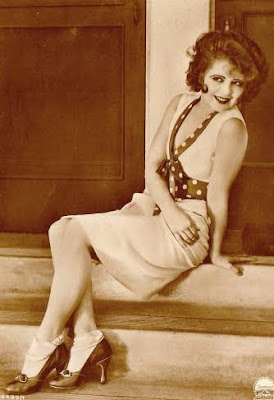 Though her ten year career was prodigious and varied, Clara was often the screen's go-to bad girl. The consummate flapper, her short skirts, penciled eyebrows, and cupid's bow lips were copied by women everywhere. When a Hollywood celebrity magazine mentioned that her wavy bob was red, stores experienced a run on henna dye. 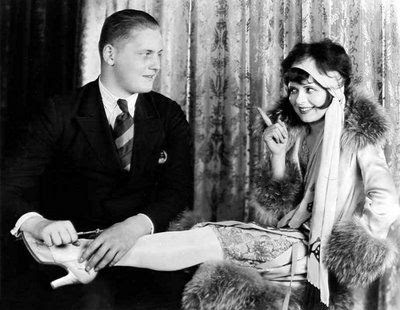 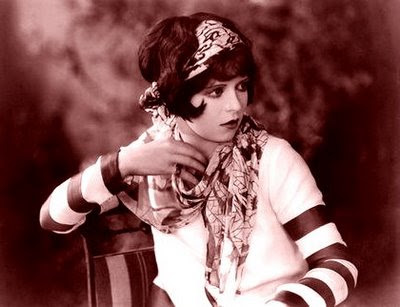 If modern women pounce on any bag Carrie Bradshaw carries, you can imagine how many young women in the 20s took scissors to their dresses after seeing this scene from It? (Fascinating fact: It is wear the term "It girl" comes from. This movie was a big, scandalous success as it was a very popular euphemism for sex.)

Eighty years after the peak of her fame, Clara Bow still captivates. She's alluded to on the runways, copied in the glossies and even has quite a few Tumblrs and You Tube videos dedicated to her talent and style. That's quite the feat, considering the non-popularity of silent films (Clara's heavy Brooklyn accent was one of several things that made her leap to talkies a bit of a belly flop) and the fact that well over half of her movies aren't available anymore (or have been lost entirely). 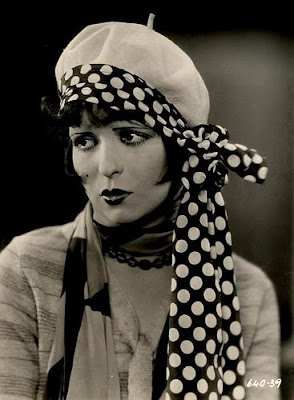 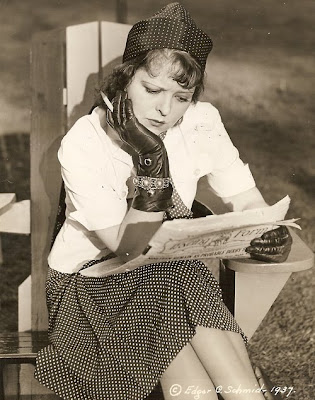 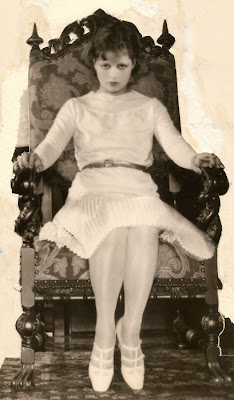 In 2011, I'm rather enamored with the way she wore scarves. She tied them everywhere, and the way she wore them in her hair is perfect if you're growing out a short crop. The scarves, the accordion pleat skirt, and the cardigans are all very doable today.

Clara Bow by fashionmefabulous
Image source: The Clara Bow Archive. Check them out for a crazy amount of rare images.
icons

Fanya said…
oh! I saw almost those exact black t-strap pump for sale at TJ Maxx, but nixed the thought and decided to buy the on-sale Anthropolgie blue loafer pump instead.
September 29, 2011 at 11:53 AM