By becca - September 27, 2011
Fashion Fringe isn't just a collection, it is three collections from the finalists in a fashion design competition. It's Project Runway gone avant-garde. (Oh, how I wish the PR designers did work like this).

First up, Fyodor Golan, a label created by a duo who met while working for Alexander McQueen. The McQueen influence is obvious in the macabre tones and exaggerated shapes. (One of the designers even donned a kilt, boots and a t-shirt on the runway.) The bird cutouts follow this season's avian trend, but in a more spooky Hitchcock or Poe way. The collars over the bedraggled hair made me feel like I was in horror movie that blended The Birds and The Ring with some sort fairy tale involving a delicate canary princess and evil bird queen. 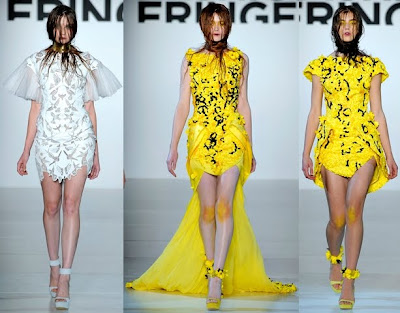 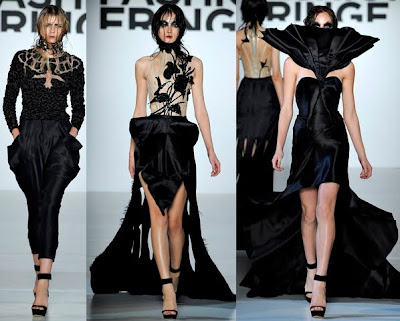 The next designer, Heidi Leung, took me to a fairy tale world too. Her fairy tale featured a favorite daughter named Cinderella who was given a gown of many colors by her father. When he died, her evil step sisters shredded her gown and made her the house slave. She was forced to wear boring beige house coats and mopping slippers all of the time. As an act of rebellion she would piece together the remnants of her brilliant gown and any household crafts she could as decoration for her drab slave look. I'm not sure if that or any story was what Leung had in mind since the collection feels very scattered and crafty, but I think she has some good ideas that could be developed into something better someday. 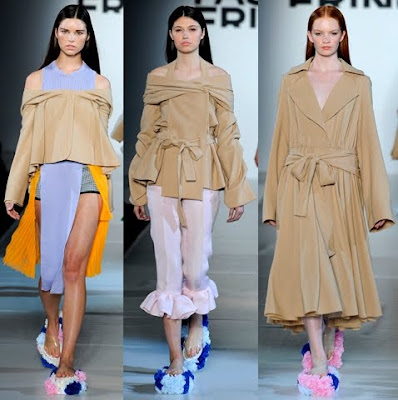 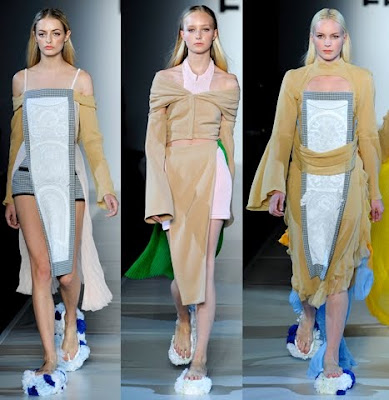 Nabil El-Nayal showed the last and probably most saleable collection of the show. He's looks were polished yet innovative. At first I disliked his pencil skirt pants, but they grew on me. I suppose these are the clothes worn by those sophisticated step-sisters, which explains the dramatic black cape at the end of the collection. 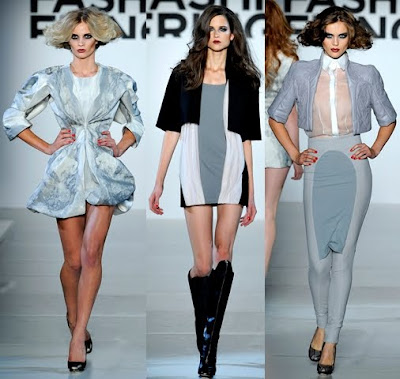 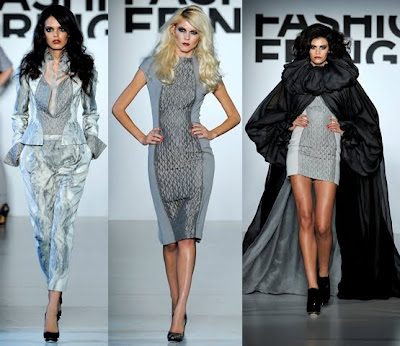 In the end, Fyodor Golan, won. I'm looking forward to seeing what their show is like in the future and how they grow their strong, McQueen-based roots as their own point of view continues to develop.